Neuville had arrived at the last WRC round in Germany leading the standings on countback over Ogier, but damaged his suspension and transmission and failed to score.

The Germany disappointment followed a muted performance from Neuville in Finland, where he was only sixth.

"It's not going to be easy, but I'm still positive and still optimistic," said Neuville.

"But what I need in the last three rallies is a more aggressive approach.

"I have finished second a couple of times in the championship and I don't care [about this again]. I want to win.

"For the coming events our approach will be much more aggressive, taking more risks and trying to catch back some points."

Asked by Autosport how that aggression might manifest itself, Neuville replied: "We have to take more risks. We have to win rallies.

"OK, when you take more risk, it can suddenly end. It will be a more fine line for us now.

"Until now we have focused on staying ahead of Ogier in rallies. It's not about focusing on him now; it's not about what Ogier does, it's about winning. 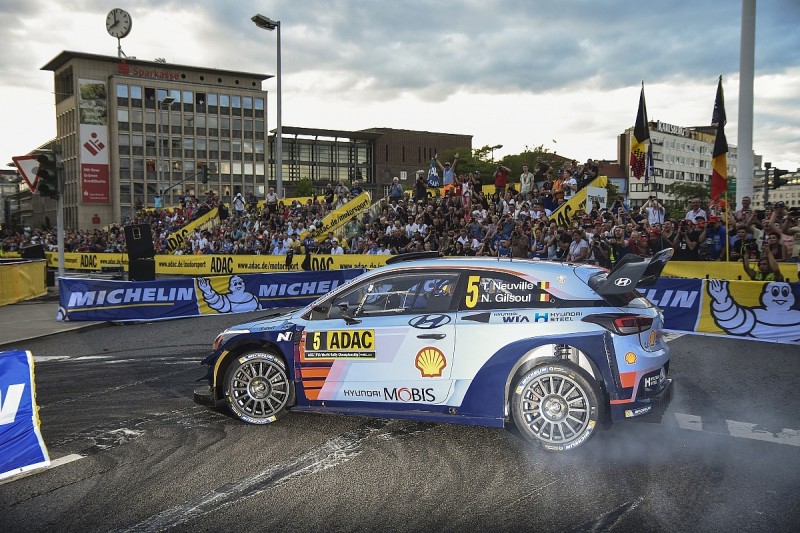 "This could depend on the tyre choice, if the weather makes a chance to gamble, then maybe this is the option.

"For the driving we have a small margin [of error] now and that will be a bit smaller from here until the end of the season."

Neuville believes Hyundai needs both aerodynamic and engine improvements to finish the season on top.

"We would like some evolution for the last events," he said.

"I know we should get some improvements.

"Hopefully we can improve on the aero and in the engine.

"Hopefully we can make a step in the power in time for Spain or GB."