The 2018 World Rally Championship title battle took a major turn last week, but in an FIA court appeal rather than at round six in Portugal

At Rally Mexico in March reigning WRC champion Sebastien Ogier was stripped of his four powerstage bonus points after he hit a chicane on the final stage.

He was one of six drivers to hit the barrier, but the only one penalised.

Amid what is becoming the tightest WRC title fight in years, insiders are concerned that the FIA decision has exposed shortcomings in the regulations and set a potentially troublesome precedent - with Hyundai's Dani Sordo and Toyota man Esapekka Lappi penalised under the same rule in Portugal.

Autosport has obtained key evidence from the appeal that raises further questions over the decisions taken following events in Mexico.

The Las Minas stage ran twice on the final day of Rally Mexico, as SS21 and then the bonus-points SS22 powerstage.

After watching Thierry Neuville's Hyundai collide with all three parts of the chicane, M-Sport Ford contacted the event organisers for clarification of the consequences of hitting the barriers there.

An email reply, sent to all teams, said the matter would be referred to the stewards.

Ogier hit the first two elements of the chicane on SS22, was referred to the stewards and had 10 seconds added to his time for the stage.

He dropped from second fastest to seventh and therefore went from four powerstage bonus points to zero.

M-Sport appealed that decision but the FIA International Court of Appeal upheld the stewards' judgement.

The FIA's Rally Safety Guidelines advises chicanes should be made from straw bales, water tanks, a wall of connected tyres or a concrete barrier.

The Las Minas chicane was made of plastic so light M-Sport presented evidence of a child pushing one of the barriers along the ground. 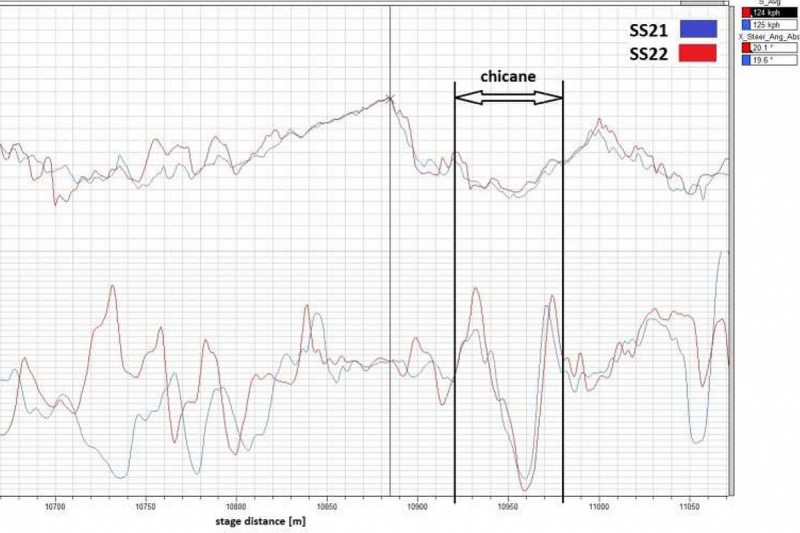 M-Sport also provided data from Ogier's Fiesta (above) showing that the car's speed through the 70 metres of the stage featuring the chicane was virtually identical from SS21 - when he didn't touch the barriers - to SS22 when he did.

Ogier contravened sporting regulation 14.2, which stipulates crews must follow the route as laid out in the roadbook, in Mexico.

But key WRC figures are questioning why Neuville wasn't penalised in the same fashion after he hit the chicane on SS21.

Deviation from the route

M-Sport directed the appeal to a stewards' decision from the 2014 Rally Poland, when Andreas Mikkelsen was found guilty of deviating from the route - a contravention of the same regulation that Ogier fell foul of.

Mikkelsen was caught cutting a corner with all four wheels on the grass, a shorter and faster route. He was handed a €5000 fine and no time penalty.

M-Sport offered evidence to demonstrate Ogier's route through the chicane in Mexico could not have offered an advantage of more than a tenth of a second.

Not all barriers are equal

Sebastien Loeb, Jari-Matti Latvala, Dani Sordo and the powerstage winner Ott Tanak all made contact with one or more elements of the chicane on SS22.

According to the ICA, the important aspect of their collision is that they hit the second and third barriers.

The FIA ICA outlined the reasons it felt the first barrier was more important than the other two, stating: "The court finds that this makes an essential difference between the other competitors' case and the case of the appellant's car #1, as the first set of elements of a chicane has the most important impact when it comes to: (i) adapting the car's path, (ii) reducing the car's speed and (iii) meeting the safety objectives of a chicane.""

In its evidence to the appeal, the FIA stated Ogier, "did not merely touch the elements of the chicane but completely displaced the first element and was the only one to do so."

M-Sport team principal Malcolm Wilson told Autosport his squad was "very disappointed with the decision. We felt - and we still feel - we have a very strong case here. We're very interested to see where we go from here."

One of the primary concerns about the decision is the precedent it sets.

"What now?" said one senior service park source. "Every time a driver clips a corner, hits a chicane or touches a tyre barrier, do we expect the stewards to step in?

"In Mexico these were lightweight plastic barriers that were very, very easily displaced.

"We had somebody in the stage watching this section and when Neuville destroyed the chicane, the barriers weren't put back in exactly the same place they were before he hit them. How could they be when there were no markings on the road to say where they had to be? 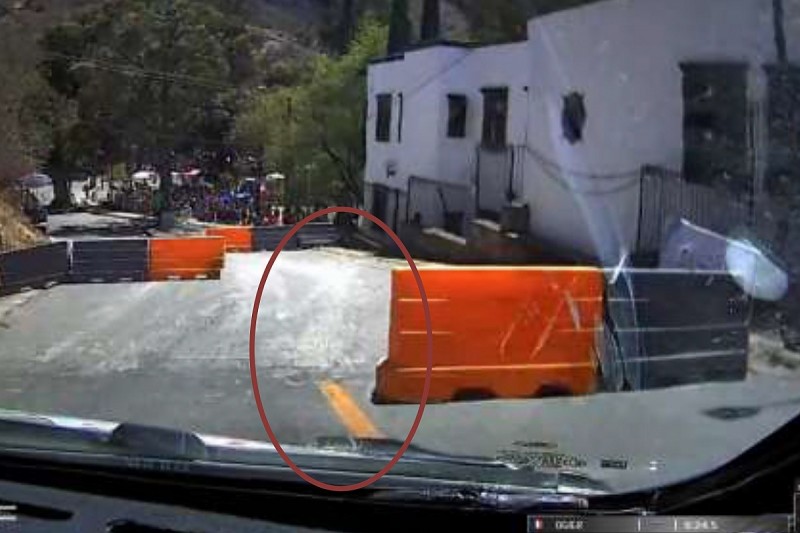 "Look at the difference between Ogier and Tanak coming through in SS22. For Tanak, the grey barrier is nearest the car whereas when Ogier [in-car shot above] went through it was the orange barrier - which is wider at the base. This is because the barriers were put back wrong."

Pictures of those barriers assembled in a different order - and showing an apparently tighter line for Ogier than Tanak in SS2 - are available from M-Sport's evidence here, which is also available in French.

The FIA judgement is available here.

One of the things this decision appears to expose is a lack of consistency, not only in the structure and placement of chicanes but also in the approach from the powers that be.

We got another example last Saturday night with a stewards' decision that left Sordo (and, after the finish on Sunday, Lappi too) hit with a 10s penalty for not going around the tyres in Rally of Portugal's Porto street stage.

A pre-event bulletin from the organisers stated: "A penalty of 30s will be applied to any competitor who fails to follow the indicated route at any of these points."

In their decision regarding Sordo's infringement, the stewards justify a 10s penalty by saying: "Bulletin 1 sets a 30s time penalty to be applied to any competitor who fails to follow the route as indicated in the diagrams.

"However, the stewards consider that the penalty stated in Bulletin 1 is merely meant for cases where a driver fails to complete all necessary laps around each roundabout and not for cases where the bales are displaced by accident." 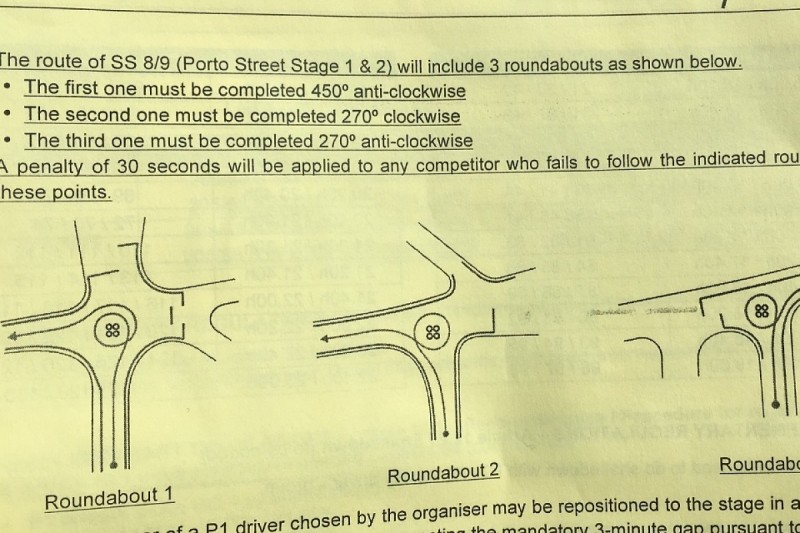 Now more than ever the WRC needs strength of leadership, permanent stewards, a uniform approach and, above anything, concrete regulation.

At the Monza Rally, for example, crews know that if they hit a chicane it's a five-second penalty. Ogier, Sordo, Lappi and co would certainly have given the barriers a wider berth in that circumstance. Let's have the same in the WRC.

A few years ago, the FIA sought input on the best way to make chicanes, Rally Germany's straw bales was seen as best practice and a regulation was expected to follow. But it's still awaited..

Failure to address this will turn the teams in on themselves - as has already started - and cause a tit-for-tat approach that will cost time, money and credibility.

The Mexico punishment simply doesn't fit the crime. All we can hope is that any championship battle involving Ogier is decided by a differential of more than four points.