Both men went to hospital for tests following Friday's crash, with concern centred on Ingrassia's condition.

Shortly before midnight on Friday, the event's chief medical officer Dr Timo Kaukonen issued a statement that read: "Julien Ingrassia got a hard lateral impact when his car drove off the road.

"The right end of the car hit hard to a tree.

"Because of headache, nausea and vomiting, he was transported to the Central Hospital of Central Finland. He underwent trauma CT and medical examination.

"He has been diagnosed with mild concussion. There were no findings in the CT.

"He was discharged from hospital and then was assigned a new medical examination in the evening by the CMO and FIA medical delegate.

"He had improved a little bit but he was not recovered completely. He also has pain in the left abdomen area.

"He is still suffering symptoms of mild concussion and therefore it is not safe that he continues competing tomorrow.

"Therefore, I decide, in consultation of the FIA medical delegate that he should have 15 days of rest from competitive driving and after that he can participate in competitions without any medical examination." 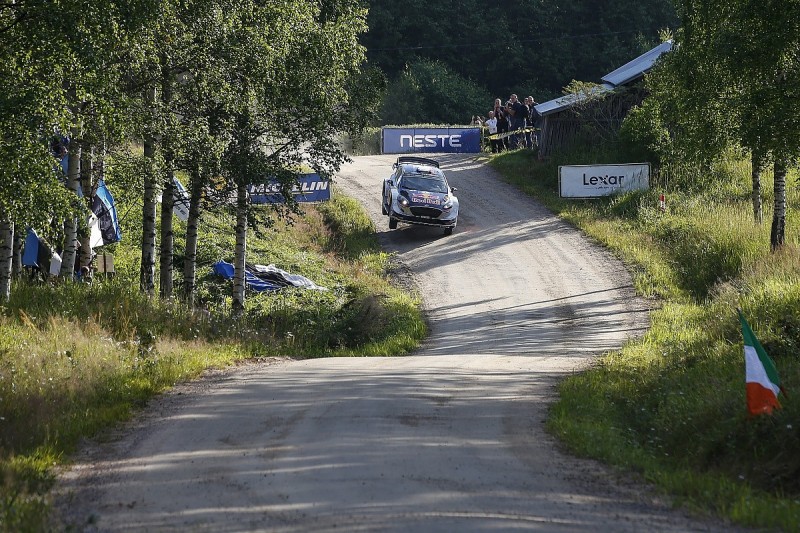 Ogier and Ingrassia were asleep by the time the statement was issued and M-Sport decided to stick to its plan of meeting the crew on Saturday morning to discuss the situation.

M-Sport team principal Malcolm Wilson told Autosport: "Our primary and only concern in all of this is Julien and it goes without saying that we will do absolutely nothing that could jeopardise his health or his condition."

In agreement with the organisers and the crew, M-Sport checked the repaired Ford out of parc ferme on Saturday morning. Ogier and Ingrassia drove it into service, where it remains.

Ingrassia will return to hospital for further tests later on Saturday.

Keeping the car officially in the rally gives Ogier and Ingrassia the possibility of restarting on Sunday to fight for powerstage points, subject to Ingrassia's condition and the outcome of the new tests.

M-Sport's Rich Millener added: "In conjunction with the organisers, we feel the sensible thing is to do the formalities with the car, keep it in the rally to have further time for Julien to recover if he's not feeling well.

"We'll make a decision later on where we go with it. We have no plan in place at the moment, we'll see how the day develops and go from there."