Llandudno has been tipped to host Britain's World Rally Championship round next season, following the success of the Rally GB town-centre stage that closed last weekend's event

As well as considering moving the service park and headquarters out of Deeside, Rally GB organisers are also understood to be looking at the potential for starting the rally in, and running a Thursday night superspecial on the streets of, Liverpool or Manchester.

While organisers remain tight-lipped on plans for the 2019 rally, one source told Autosport: "We've worked with Llandudno and Conwy for a very long time and this would seem to be the next logical step to move the service park.

"We know the place has the infrastructure - certainly hotels aren't going to be a problem. Llandudno's a great fit for us.

"As for the new start venue, Liverpool or Manchester would make a huge amount of sense.

"Both have a massive centre of population and running the ceremonial start and the chance to run a stage out of either would be a real coup for the event."

Last weekend's rally made history, with closed roads being used for a world championship event for the first time. 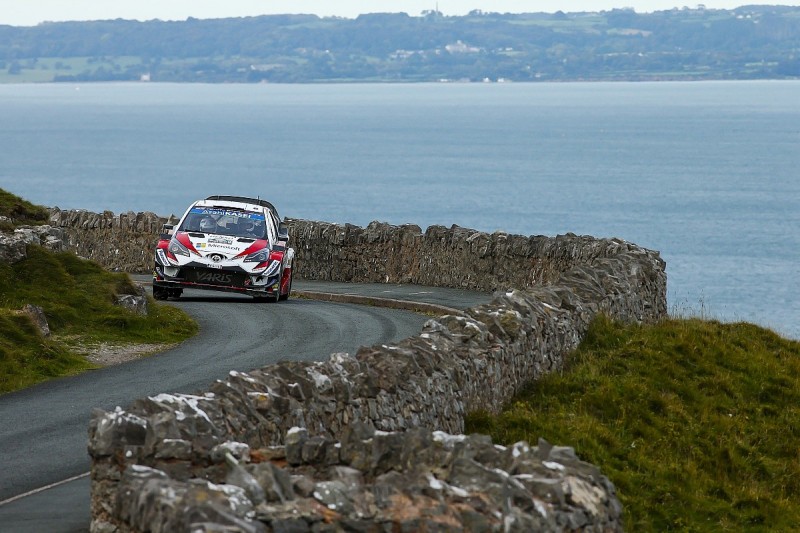 The final stage was an extended version of the all-asphalt Great Orme headland road into Llandudno, with thousands packing the streets of the Welsh seaside resort to watch.

The event was marred by an accident involving a seven-year-old member of motorbike display team, which occurred in the hours between the first and second run at the stage.

The child involved remains in a serious condition at Alder Hey Hospital in Liverpool.

Rally GB managing director Ben Taylor said: "It's a desperately sad situation to have an accident like this happen. All of our thoughts are, naturally, with the child and his family.

"The display team is one we've used for a long time, we know them all well - they were performing for us at the Tir Prince stage on Thursday night."

Taylor praised the work of his Llandudno team, both in setting-up the stage and in reaction to the incident.

"While it had little to do with the rally itself, the police informed us we wouldn't be using that stretch of road due to their investigation.

"So, in close liaison with the police, we put together a new route and got the stage running.

"I have such a mixture of feelings about this right now, so many people have put so much work in all year to make this event happen.

"We closed the road in Llandudno at 2pm on Saturday afternoon and people worked all night to create this unbelievable stage.

"After the accident, the team had the re-route down and a new finish in place in under an hour - that's just amazing.

"I've been bowled over by the commitment and passion this brilliant bunch of people have put in to make Llandudno what it was, but, right now, it's difficult to focus on that."

Will Kris Meeke's WRC comeback with Toyota pay off?