WRC manufacturers' championship leader Hyundai arrives at the Jyvaskyla-based event with significant upgrades to its i20 Coupe WRC.

The team would not be drawn on the specifics of the upgrades, but Autosport understands the aerodynamics at the front of the car have been worked on along with the suspension.

Hyundai has yet to take a podium in Finland in the five years since it returned to the WRC.

Adamo said the fact Hyundai had won in Corsica - where it triumphed in 2017 but finished a minute off the lead last year - earlier this season proved it should not accept having any uncompetitive rounds.

"Before Corsica we had the same story," Adamo told Autosport.

"This is one of the things that makes me shout the most in meetings. I accept everything. I accept every failure, if we try. But not to try is something I don't accept.

"This is not games without frontiers when you can skip some results. We have to be competitive everywhere. 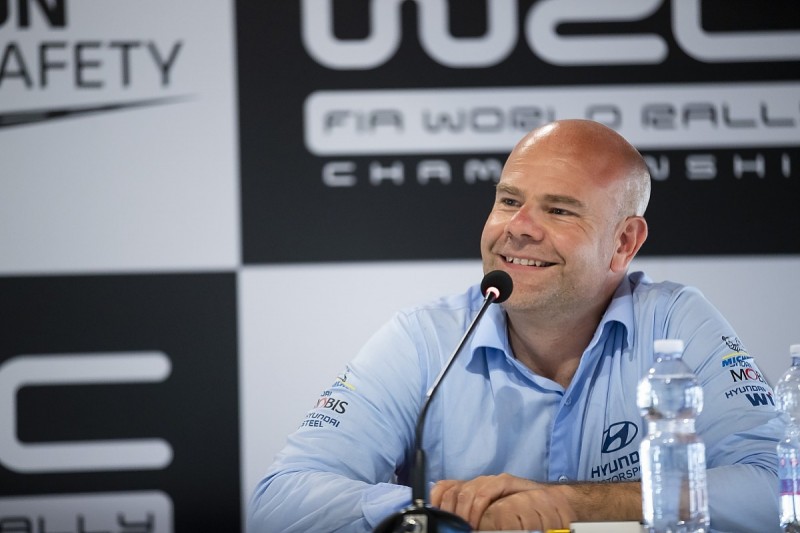 Asked if he was confident Hyundai had unlocked sufficient pace to ensure the i20 can challenge for victory this week, Adamo replied: "If it's enough or not I don't know, but what I know is that it's all we could do in the time and with the homologation possibilities."

Hyundai's title contender Thierry Neuville heads to Finland third in the championship but only seven points behind leader Ott Tanak, with Sebastien Ogier between them.

Toyota has won in Finland for the past two years, with Esapekka Lappi in 2017 and Tanak last season.

"It will be difficult against the Toyotas in Finland," Neuville told Autosport.

"Their car was made on these roads and we know it will be fast, not just with Tanak, but also Jari-Matti [Latvala] and Kris [Meeke] as well.

"We have made some changes to our car, let's see how they work."

Tanak took the points lead from Ogier in Sardinia last time out, so must run first on the road in Finland.

Citroen driver Ogier said that gave him hope of a first Finland victory in six years.

"Even if it's Finland and even if it's one of the strongest events for [Tanak] and for Toyota, I'm going there for a fight," Ogier told Autosport.

"When it's possible, I always try to race the Toyotas.

"The problem we often face is with the start order and when I start first on the road on a dry gravel event, I know I will have no chance against them. And I don't fight them.

"But now, starting behind him, I'm definitely going to try to fight with him. That's what I'm going to Finland for."