The former Citroen driver, called up by Hyundai for what is currently a one-off outing, was second only to WRC leader and 2018 Finland winner Ott Tanak's Toyota on his first shakedown run - outpacing Hyundai team-mates Thierry Neuville and Andreas Mikkelsen at that point.

Neuville ultimately got ahead of Breen on his final run, but Breen remained third fastest.

"The car felt comfortable and, to be honest, when I saw the time at the end of the first run, I was quite surprised.

"It wasn't like I'd had this great feeling, it felt average - a good time, but I wasn't expecting that.

"But look, it's shakedown. Let's not get carried away.

"I want to get into the event and get on with it. I'm not about to start over-analysing things." 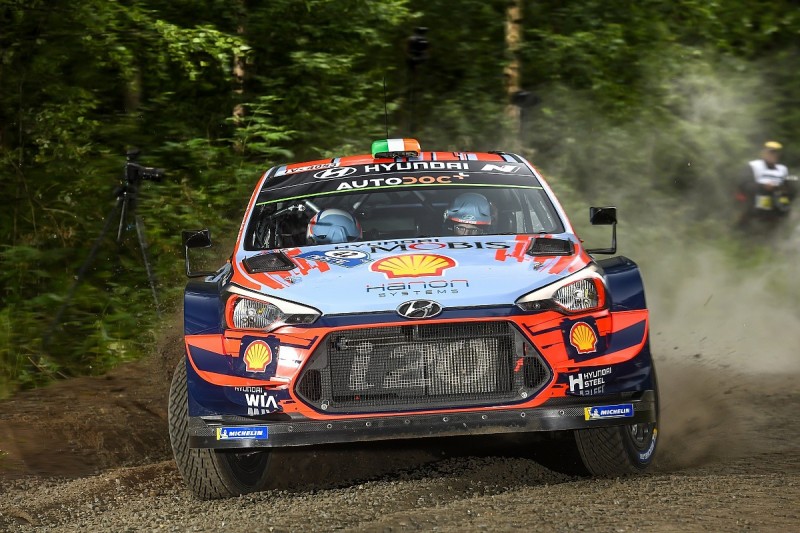 Dropped by Citroen at the end of last year, Breen has had the first half of the year to analyse things and he admitted he had emerged from his time away from the world championship with a different attitude.

"The way my mind is now and the way the whole situation is, it's just an absolute pleasure," he said.

"I feel like I'm in a good place with my mind.

"My whole world revolved around being in the World Rally Championship for so many years.

"Working through the categories to get there, at times it felt like I was on a cliff edge and I felt like life would stop if I fell off that cliff.

"But the sun rises and the alarm still goes off every morning and the days tick away like normal. It's not like the world stops if I'm not here.

"I got to do some things in the last few months while I was out of the world championship that I would never have got to do if I was still in it.

"I ate a lot and I didn't train for a month, I was lazy. I did things that I never had the time to do before.

"I got to rally back home again, which is something that's so, so close to my heart and I spent time with friends and family - people I have skipped to get here."

During his WRC absence, Breen and co-driver Paul Nagle have conducted what they've labelled their 'social rally calendar' driving cars as varied as the MG Metro 6R4 (as a course car in Killarney) and Volkswagen's Polo GTI R5, in which he won the Ypres Rally.

"This was like a full reset with my brain and it helped me to understand that this is what's waiting for me if, for some unfortunate reason, this opportunity ends at some point" Breen added.

"I understand there is life outside of the WRC. Don't get me wrong the WRC is still my whole world, it's still the be-all and end-all, but there's a whole other world waiting for me."

Finland is Breen's first WRC start since Rally Australia last November and his first start for a factory WRC team other than Citroen.