Evans went into the afternoon loop 4.8 seconds ahead of his Toyota team-mate Ogier, but lost all of that advantage when Ogier went second fastest on the St Ledger Les Melezes - La Batie-Neuve stage, leaving both drivers tied for the lead ahead of the final run of the day.

On SS12, La Breole - Selonnet it looked as though Evans might have lost his rally lead after going off the road slightly towards the end of the stage, but Ogier, who was running behind, lost 9.5s before the third split after being "too cautious on the ice".

Evans instead goes into the final day of the rally holding a 4.9s lead.

Neuville had a strong afternoon in his i20 Coupe WRC, repeating his feat from Saturday morning by winning the St Ledger Les Melezes - La Batie Neuve test, before taking his third stage victory of the day on SS12, finishing 4.6s ahead of Evans's Yaris. 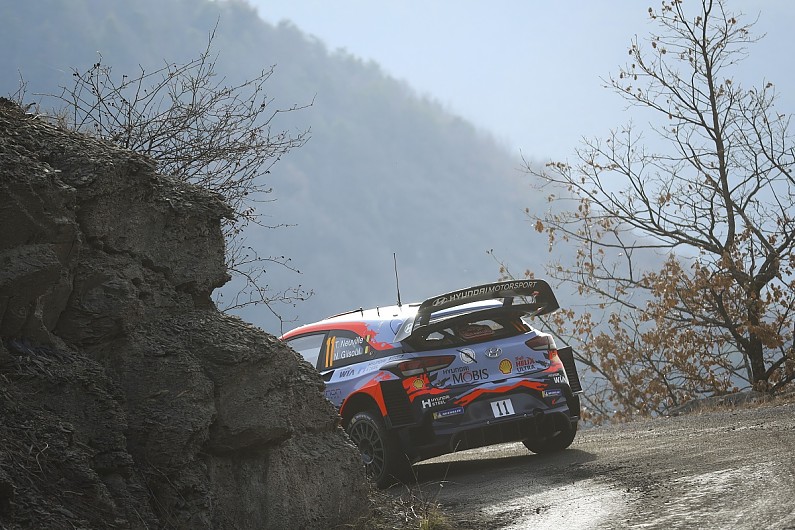 That result means the Hyundai driver has reduced his gap to the lead to 6.4s with four stages remaining on Sunday.

Sebastien Loeb admitted he was too cautious again, losing 11.6s to his nearest challenge Esapekka Lappi on SS11, and he was a further 9.5s behind the M-Sport driver on the following stage after spinning on the La Brede - Selonnet run.

Despite his difficulties, Loeb maintained fourth position overall, with Lappi 14.1 seconds behind in fifth.

Toyota driver Kalle Rovenpera took a gamble on his tyres in the afternoon, selecting two winter tyres and two softs for the final stage while his rivals all went for soft and supersofts, but it did not pay off and he is now 48.9s behind Lappi in sixth.

Takamoto Katsuta had a much better afternoon loop, having spun his Yaris in the morning, and he moved back up to seventh.

Eric Camilli remains the WRC3 leader in his Citroen C3, but he has dropped back down to eighth, 44.1s behind Katsuta.

Mads Ostberg has moved up a position to ninth, while C3 driver Nicolas Ciamin rounds out the top 10 in his Citroen C3.

M-Sport driver Teemu Suninen finished in the top 10 on both of the afternoon stages and is now only 13.2s behind Ciamin going into the final day of the rally.