Six-time WRC Monte Carlo Rally winner Ogier closed in on Evans by topping the first two stages of the afternoon's three-stage loop, and then on the final stage of the day got ahead of Evans by 1.2 seconds to lead a Toyota 1-2 at the rally's halfway point.

Ogier on the afternoon's opening stage, the 12.4-mile Curbans - Venterol test, reduced his deficit to leader Evans from 9.7s to 3.3s and with it moved past Thierry Neuville's Hyundai into second place overall.

Evans, who had dominated the morning loop to lead, ended the afternoon's first stage with a damaged front-right wheel.

He said "it just sucked me into the ditch in one place," and added that it was "not a big deal but very marginal".

Ogier then trimmed another 0.6s from Evans' advantage on the loop's second stage, from Saint-Clement-sur-Durance to Freissinieres, reducing the gap to the sister Yaris to 2.7s.

This was despite Ogier feeling that he had selected too many super-soft tyres for the dry conditions.

Ogier then took the overall lead by being 3.9s quicker than Evans on the day's final stage, between Avancon and Notre-Dame-du-Laus, although this time both were slower than stage-winner Neuville.

Overnight leader Neuville had continued to slip from the Toyotas' pace in the first two stages of the afternoon, and commented that he needed to get on top of pacenote corrections from his gravel crew, with Dani Sordo stepping in for the unwell Bruno Thiry as Neuville's opener for this rally. 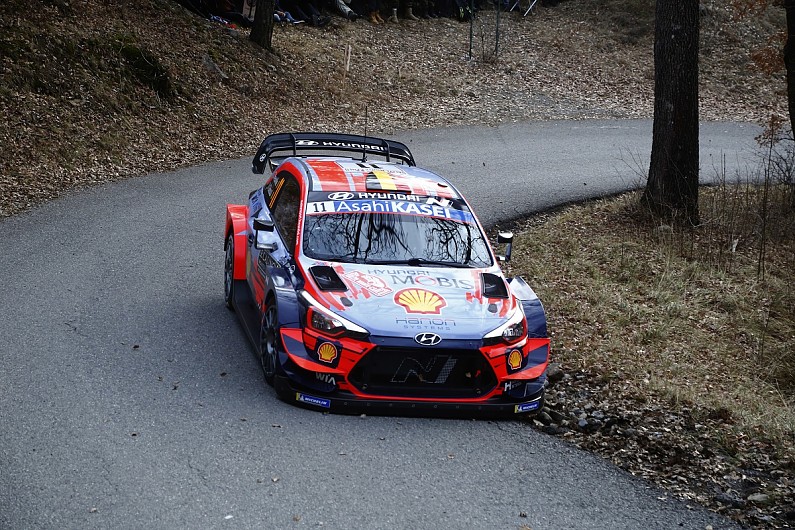 With his late improvement Neuville ended the day in third, 6.4s off Ogier.

Seven-time Monte Carlo Rally winner Sebastien Loeb remained in fourth place overall in his Hyundai i20 Coupe and fell away on the stopwatch during the afternoon, to end the day just over a minute off the leader.

M-Sport's Esapekka Lappi continued in a disgruntled fifth place, falling to just under two minutes back from Ogier by the end of the day.

He is followed 22s back in sixth overall by Toyota's WRC debutant Kalle Rovanpera, who continued to impress in his Yaris. His team-mate Takamoto Katsuta is next up, over five minutes off the top.

The first of the R5 'WRC3' runners are next, with Eric Camilli in his Citroen C3 continuing to lead the way in eighth place overall, from his WRC3 rival and fellow C3 runner Nicolas Ciamin in ninth and just under a minute shy of him.

Ole Christian Veiby in his Hyundai NG i20 lost his WRC2 lead after losing around two minutes with a puncture on the afternoon's first stage.

This let Mads Ostberg, who himself had lost nearly three minutes with a puncture on this morning's opening stage, reclaim the WRC2 lead in his Citroen with a 10.7s advantage over Veiby.

Ostberg then extended his class lead to 13.9s by the day's conclusion and sits in 10th place overall.