Citroen has revealed the most radical aerodynamic updates seen since the start of the new era of World Rally Cars in 2017 ahead of Rally Spain.

The French team has been testing its car in Spain ahead of next week's Salou-based event, a crucial event in Ogier's efforts to take his seventh straight championship and Citroen's first world title since 2012.

Ogier's biggest concern in Spain is the two days on asphalt.

The Frenchman labeled the car 'undriveable' on the way to seventh overall in Germany, a puncture removing him from the back end of the podium where he struggled to match title rivals Ott Tanak and Thierry Neuville despite admitting to driving flat out.

Neuville won the previous asphalt event at the Tour of Corsica, after Tanak got a puncture.

During the Rally Spain test the C3 WRC showed off a complete aerodynamic makeover, with a new splitter and additional wings above the front wheels, remiscent of the vanes seen on Formula 1 sidepods.

Citroen's technical director Olivier Maroselli wouldn't be drawn on the aero updates and which of them would be seen in time for next week's event.

"All I can say on this subject is that we are working flat out," he said.

A source in one of his rival teams said they would be watching with interest as Citroen arrived in Spain.

The source told Autosport: "That's a lot of work all around the car.

"It's going to be interesting to see how much of that comes, but if they're not using it then you would ask the question of why Ogier would be driving the car with it on - especially at such a crucial time of the season."

In its first season, the C3 was at its strongest on asphalt with Kris Meeke coming close to winning the Tour of Corsica in 2017.

Since then, however, the chassis evolution has brought more understeer into the car and that's where the focus of the testing has been.

Citroen tested for four days in total, three of which were on asphalt and two of those three were for Ogier. 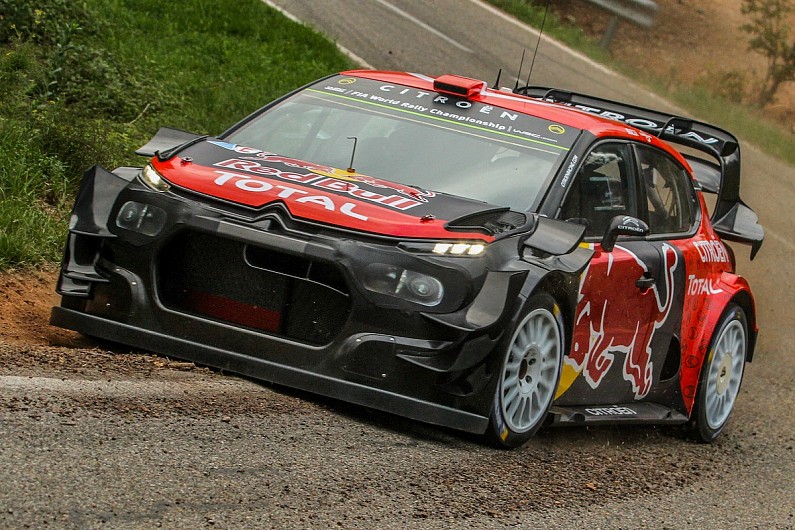 Speaking ahead of the day on the gravel, Maroselli told Autosport: "So far so good. We mainly worked and improved on the diffs (differential) side.

"We found some interesting ideas on that side already on [the team's] Satory [test] track and we could go further here on representative roads.

"It's also the first time that we use on Tarmac the new front geometry introduced in Finland.

"We also worked on the dampers side.

"Everything combined, we solved the understeering issue, which was our main issue on the last Tarmac rounds.

"We clearly improved the balance of the car and the driver's feeling confirms it.

"But nothing replaces the race itself.

"What we don't know yet, is if it will be enough or not in terms of performance.

"But we will keep working flat out till the rally to be as much competitive as possible."

Citroen won Rally Spain last year with Sebastien Loeb behind the wheel, but a major factor in the victory was Loeb's tyre choice on the Sunday morning, which gave him an advantage.

Citroen has already missed out on bringing updates for the C3 WRC; it had tested and planned new suspension parts for the car for Rally GB, only to be told they could not be homologated until next season.