Tanak ended the opening day 22.4 seconds clear of second-placed Ogier, as well as 29.5 clear of points leader Thierry Neuville of Hyundai, extending his advantage from 6.1s and 6.6s respectively over them at the start of the afternoon loop.

Neuville and Ogier are the two ahead of Tanak in the championship table heading into this rally.

On the afternoon loop's opening stage - the second El Puma run of the day - Tanak was 11.2s quicker than Ogier and 17.6s quicker than Neuville.

Then on SS5 - the second Espigado run - Tanak made another advance, extending his lead by a further 5.8s over Ogier and by 7.6s over Neuville.

On the evening's short 1.4-mile street superspecial stage in Concepcion that closed the day, Tanak ceded a little time back - 2.3s to Neuville and 0.7s to Ogier.

Neuville slipped to fourth place overall behind Tanak's Toyota team-mate Jari-Matti Latvala in the course of the afternoon. Third-placed Latvala is 28.8s off Tanak and just 0.7s clear of Neuville.

It might have been even better for Latvala as he was on course to be quickest of all on SS5 but stalled at a junction near the end of the stage. 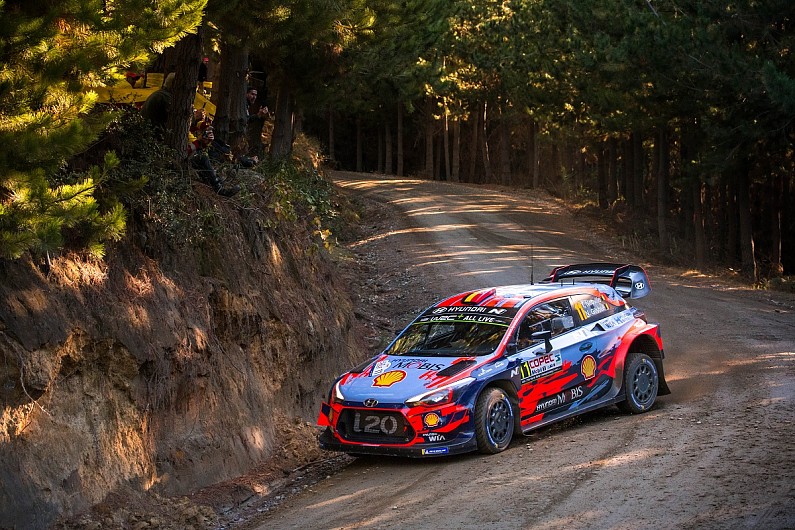 Neuville said he was disadvantaged on the long stages by "cleaning the surface" as first on the road and continued to express annoyance with the notional time given for his red-flagged SS2 run during the morning.

Toyota's Kris Meeke ended the day in fifth place overall, 46.5s off Tanak, and was one of several drivers to say he was too hesitant on the long stages.

Hyundai's Sebastien Loeb was next, leapfrogging M-Sport's Elfyn Evans in the order by setting the second-best time on both of the afternoon loop's long stages. Loeb then topped the superspecial too.

Nine-time champion Loeb ended the day 2.2s shy of Meeke and 12.7s ahead of seventh-placed Evans. Evans struggled particularly on SS5, losing 12.2s to Meeke and 15.6s to Loeb.

Andreas Mikkelsen is eighth for Hyundai, 2m08.1s off the pace, having hit a rock on the first stage of the day and later admitting that he was not driving at 100%. He also admittedly he nearly rolled on SS5 in a brief two-wheel moment.

M-Sport's Teemu Suninen is ninth overall, a second behind Mikkelsen, and continuing to be audibly frustrated with his driving.

Citroen's Esapekka Lappi continued to hold 10th place, and ended Friday 10.2s off Suninen overall as well as 2m18.3s off the lead. Lappi was another to state he was lacking the confidence required to commit to the stages.