World Rally Championship drivers have expressed more concerns about warming temperatures affecting this weekend's second round of the season in Sweden.

The Torsby-based event gets underway in Karlstad on Thursday night, with no sign of the deep-freeze needed to combat daytime temperatures consistently above 0C on the Varmland roads in the west of the country.

Hyundai driver Neuville, who will start second on the road on Friday morning, said: "The conditions on the recce and at shakedown this morning were not so bad.

"Starting second, what we wanted was good ice and not so much snow - on the recce we had this, but now with the melting, we don't know how will it be.

"There should be enough for the first pass, but the second pass could be difficult with the ruts.

"The priority has to be to get into a good position on Friday night for Saturday. Saturday could be the challenging day."

Friday's stages are over the border in Norway, where there is generally more snow and ice, but the weekend's tests are closer to Torsby.

Sebastien Ogier's concerns about conditions were rejected by Rally Sweden's CEO but the championship leader, who will start ahead of Nevuille on the road, said his fears had not abated.

"If we started the rally on Tuesday, on the recce, then it would be good to start at the front [of the field]," said Ogier.

"But now the warmer conditions will make it difficult.

"Like we saw at shakedown, the times will get faster and faster with each car that passes.

"In any case, you have to focus on what have in front and not focus on the times otherwise you get quickly disappointed."

Marcus Gronholm, the most successful driver in the history of the rally with five wins, sympathised with those at the front of the order.

"It looked good on the first day of the recce, but then it changed and it's 9C, today it's plus degrees again," said Gronholm, who is returning for a one-off drive in a Toyota Yaris WRC.

"I don't know if it is good to [be] the first car? Maybe fourth or fifth car is the best place."

Ogier was third, while Gronholm was a surprising 11.9s down over the 4.26-mile stage.

"It feels quite OK," said Gronholm, "but I can feel I have not been in the rally car and doing notes for nine years.

"There was a lot of braking and throttle in the wrong places.

"The notes were not OK, but I try to improve and enjoy tomorrow. For now the speed is not there. I must find it." 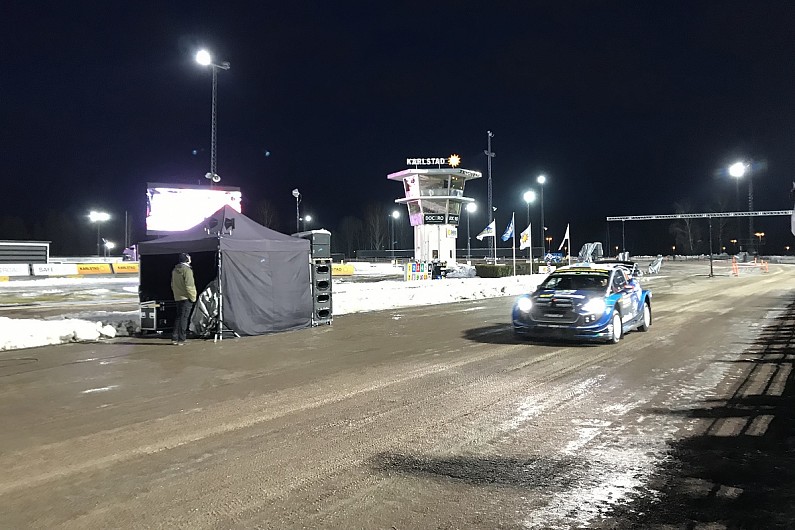 Put simply, a ridge of high pressure has pushed the jet stream up over northern Europe - the same weather system which has left London basking in a spring-like 15C.

Olsson's comments were qualified by the need for -10C at night. Last night it barely dipped below freezing, so the ice layer which is melting on the roads by day is not re-freezing at night.

The ice is sufficiently deep for the first run of cars but, with 14 current generation World Rally Cars, each fitted with 1536, seven-mil, tungsten-tipped studs tearing at soft ice, that surface won't last.

Crews fear the roads will be rutted and, with temperatures warming further at the weekend, turn to slush on Saturday and Sunday.

The organisers will be keeping a keen eye on the state of the Torsby test, which is included on Friday and Saturday night before forming the centrepiece of the live television coverage as the powerstage on Sunday.