Olsbergs MSE will return to the World Rallycross Championship this season with a pair of all-new Ford Fiesta Supercars, having withdrawn from Global RallyCross

Kevin Eriksson, son of team owner Andreas, will return to his family team having driven for the MJP Racing squad in World RX last year, while 2014 European Rallycross champion Robin Larsson will join him.

Both drivers are World RX race-winners, Larsson having scored victory in Argentina in 2015 driving an Audi A1, while Eriksson won the German round for OMSE in '16.

The OMSE squad won the teams' title in the first year of World RX in 2014, and won the GRC three times.

"Concentrating our efforts in Europe and on the international stage offers a number of advantages," said Andreas Eriksson.

"First and foremost, we are excited to see what our rapid new line-up of Kevin and Robin can achieve out on track.

"2018 is a big year for Olsbergs MSE with an all-new car for the forthcoming campaign, fitted with our own latest-specification custom engine that has already proven itself as a winning powerplant."

At the first of two official World RX pre-season tests, which began on Wednesday at Loheac in France, OMSE fielded a development version of its Fiesta, featuring a front-mounted engine cooling package, a concept used by Volkswagen Motorsport in World RX last season with its PSRX VW Sweden-run Polo.

The development-specification Fiesta also appeared to feature an inboard suspension system, pioneered in the rallycross Supercar concept by the OMSE squad on the Honda Civic it has run in the GRC for the last two years.

"We have a very good car, the best we've ever built," Eriksson Sr told Autosport.

"If it's good enough, we don't know. We have the tools and we want to win races. The last decision [to do this] came late, but we have been working on the development behind the scenes and done a lot of testing. I'm not here just to participate at all." 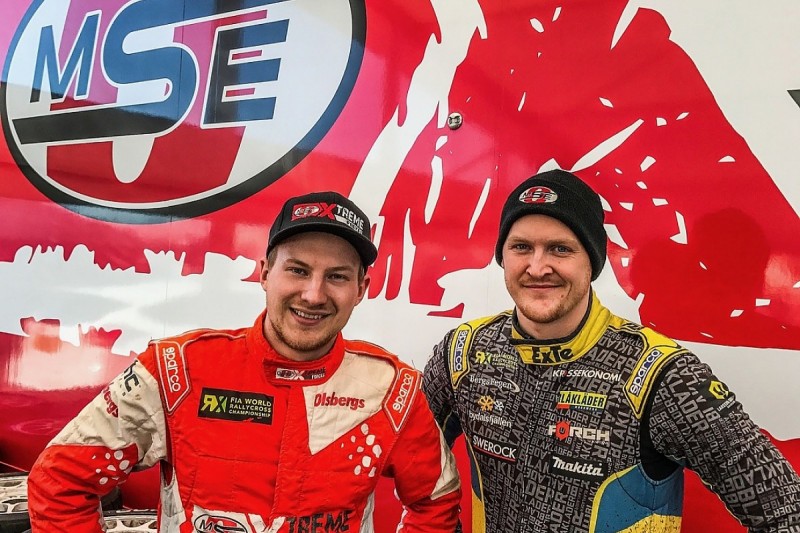 Kevin Eriksson said he was pleased to be returning to his family team.

"It will be a very interesting year, we have a new concept and it feels very good to be back," he told Autosport.

"I feel that I've grown as a person and as a race driver and hopefully I can bring that to the team this season.

"We are still a small team but I think we have the package to be fighting the manufacturer guys. We want to show them you don't need the money they spend."

Larsson has only previously driven for his own team in rallycross.

"There's a lot of new things to get into, to work with the team," the 25-year-old told Autosport.

"I think me and Kevin need to be very strong at working together this year, because we are not a factory team.

"It's going to be a really though season but I like to be the underdog so I'm excited."