United Autosports driver Filipe Albuquerque set the fastest time of 2m04.968s at the wheel of the #22 ORECA 07 not long after the first of three red flag interruptions, which he caused by getting beached on a sausage kerb.

The second stoppage came just under an hour into the session as a result of Ben Keating crashing at the top of the Eau Rouge/Raidillon complex in the TF Sport Aston Martin Vantage.

Keating was taken to the medical centre for a checks but is understood to have avoided major injury.

The session was brought to a premature halt when the other car run by TF Sport, the D'station Racing Aston of Satoshi Hoshino, had a similar accident at the exact same location.

The session did not resume thereafter owing to the damage to the tyre barriers.

LMP2 cars filled out the top seven on the overall leaderboard, with Giedo van der Garde putting the Racing Team Nederland ORECA in second on a 2'05.496s, 0.528s down on Albuquerque.

Third-fastest was Loic Duval in the RealTeam ORECA, 1.011s off the pace, followed by Ben Hanley in the DragonSpeed car and Anthony Davidson in the quicker of the two Jota machines.

However, the DragonSpeed entry was later stripped of its times, promoting Davidson to fourth and the WRT ORECA of Robin Frijns to fifth.

The best of the three cars entered in the top Hypercar division was the #8 Toyota GR010 Hybrid of Brendon Hartley in seventh with a best time of 2m06.896s, almost two seconds off the outright pace. 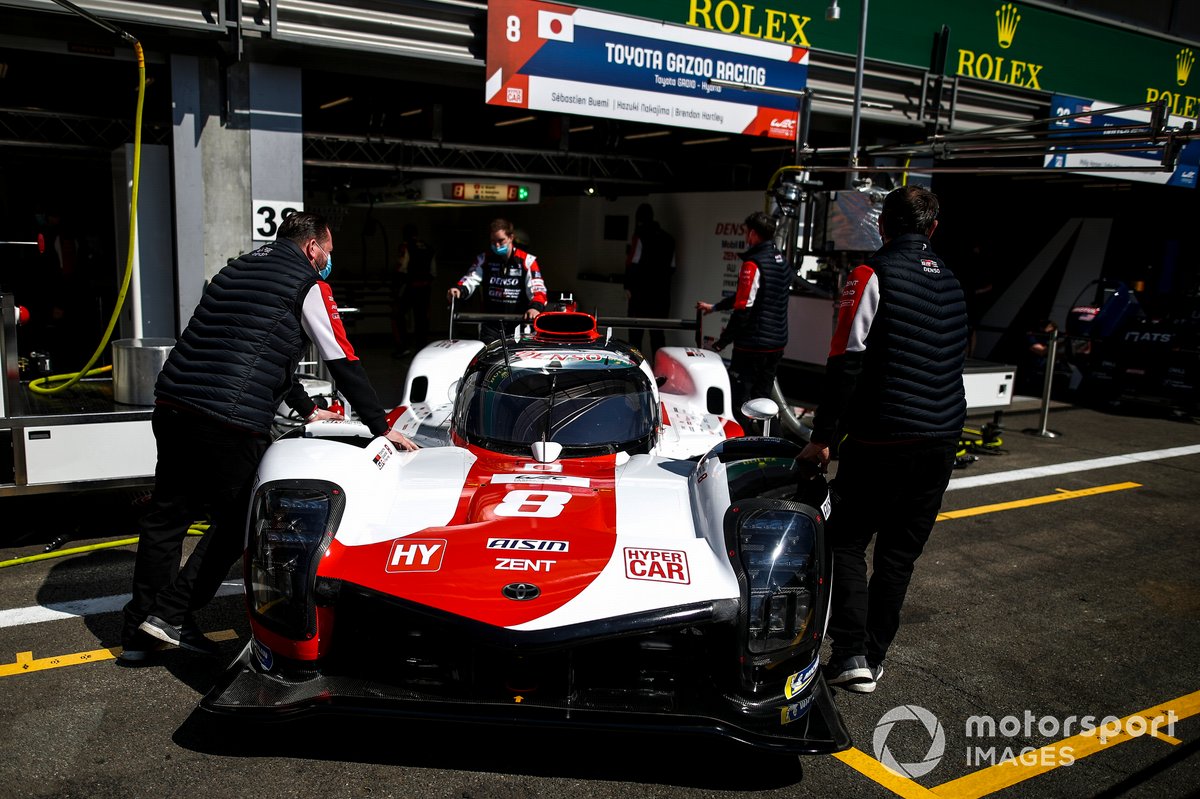 Alpine's grandfathered A480 LMP1 car, which raced last season as the Rebellion R-13, was second in class on a 2m07.586s set by Matthieu Vaxiviere - which was only enough for 12th overall.

The #7 Toyota didn't set a lap time, only completing two installation laps during the session.

The #51 Ferrari 488 GTE of James Calado was second-fastest, a little under two tenths further back, ahead of the best of the GTE Am machines, the Cetilar Racing Ferrari.

Corvette Racing's solo C8.R was third-fastest in GTE Pro on a 2m14.924s set by Antonio Garcia, ahead of the second factory Porsche driven by Richard Lietz.

The second AF Corse-run Ferrari Pro car was only 11th overall among the GTE cars, around a second and a half off the pace.

Monday afternoon's second session has been extended by half an hour to compensate for the morning's lost running, and will begin at 1.30pm local time.