Having extended their lead in the championship to 16 points with pole position in Friday’s qualifying, the crew of the #7 Toyota GR010 Hybrid only needed to take the chequered flag as a classified finisher to become WEC’s first-ever Hypercar champions.

Although victory remained out of reach in the season-closing Bahrain 8 Hours, a runner-up result to Toyota squadmates Kazuki Nakajima, Brendon Hartley and Sebastien Buemi was enough for Kobayashi, Lopez and Conway to complete the Le Mans 24 Hours/WEC title double for the first time in their WEC careers.

Conway led the early stages of the race from pole position after the fast-charging Alpine A480 dropped out of contention, but was asked by Toyota to hand over the position to a faster Buemi at the start of the second hour.

The two Toyotas would not be involved in a wheel-to-wheel fight for the remainder of the eight-lap contest, with the gap between the two cars seven seconds at the finishing line.

Nakajima took the chequered flag in the winning #8 Toyota, bowing out of the championship in style with three overall successes at Le Mans and the 2018/19 LMP1 title.

Nicolas Lapierre, Matthieu Vaxiviere and Andre Negrao finished six laps down in third in the #36 Alpine A480-Gibson, with early technical woes preventing the French manufacturer from putting a consistent challenge to the Toyotas.

Although Lapiere was able to pass both Conway at Buemi at the start with a breathtaking start from third on the grid, his lead turned out to be short-lived with both the Toyotas repassing him before the end of lap 10.

Lapierre had fallen nearly 30 seconds behind the leading Hypercars when he suddenly slowed down on lap 25 with what was diagnosed to be a gearbox issue. A lengthy trip to the Alpine garage followed, ensuring Toyota ended the season with a perfect run of six victories in as many races. 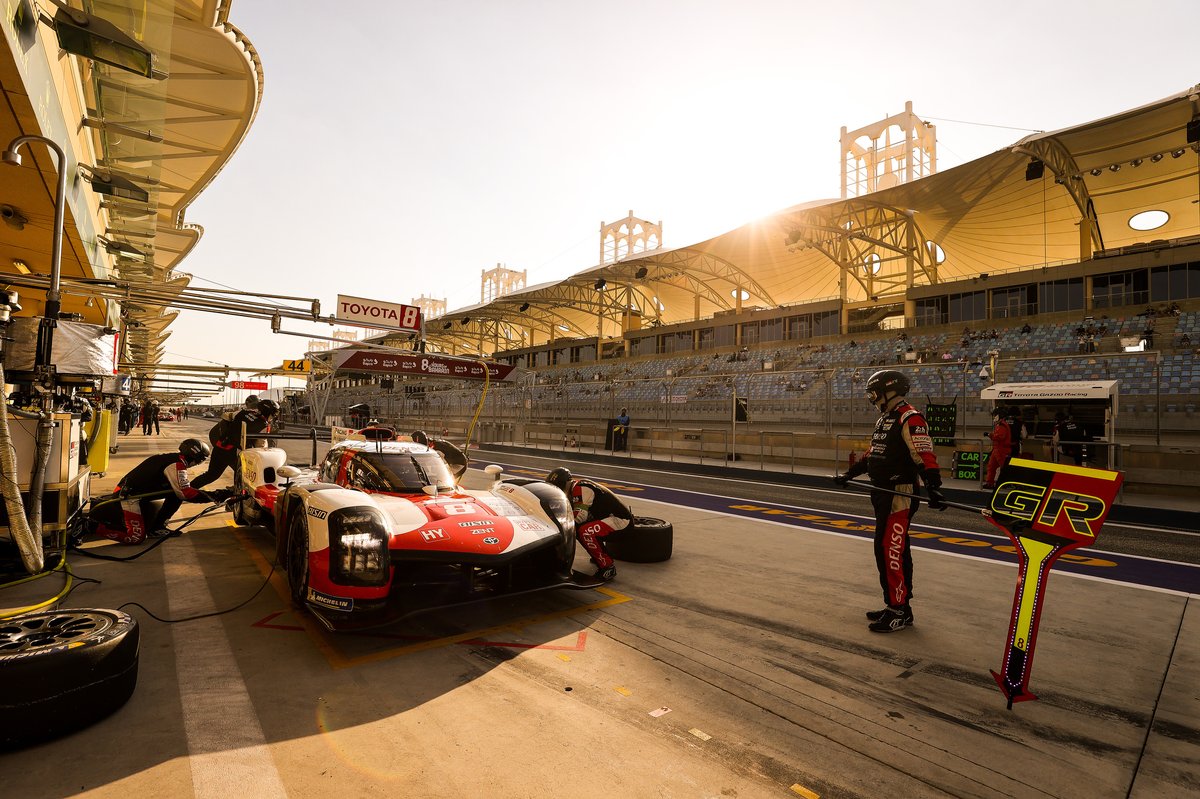 After a topsy-turvy battle between the only two marques in the class, the #91 Porsche 911 RSR-19 of Christensen, Neel Jani and Kevin Estre was leading the race going into the final hour.

But Pier Guidi nudged Christensen into a spin at the final corner moments after they were lapped by the United LMP2 car, leaving the Porsche down in second position.

Race Control ordered Pier Guidi to hand the position back to Christensen within a few laps of the incident, but he took the chequered flag in first position to provisionally secure Ferrari both championships in GTE Pro.

Prior to Ferrari and Porsche’s late-lap clash, Calado and Estre traded positions multiple times in the first two stints of the race, before the German manufacturer took the advantage by pitting a lap under the first Full Course Yellow in the second hour.

Ferrari struck back just before the halfway point of the race with a quicker stop during another FCY period, but Estre was able to charge past Calado under braking for Turn 1 in the sixth hour.

Christensen and Pier Guidi took the battle to the final hour after taking over from their respective teammates. Daniel Serra and Miguel Molina finished third in class in the second of the two Ferraris, while Gianmarina Bruni, Richard Lietz and Frederic Makowiecki rounded out the class in the #91 Porsche. 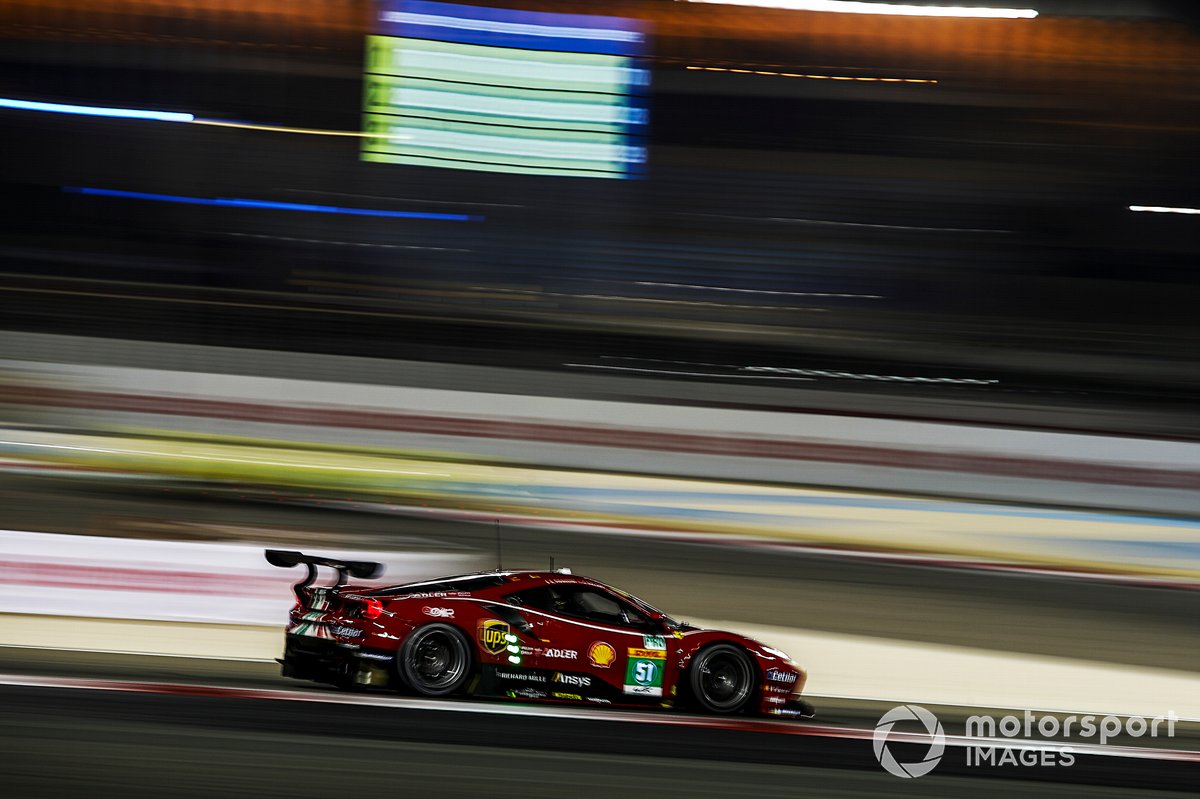 WRT’s dream first year in prototype ranks continued as it clinched the title in WEC’s ultra-competitive LMP2 class, adding to its success in the European Le Mans Series.

Ferdinand Habsburg, Charles Milesi and Robin Frijns secured the crown following their third successive victory of the season in the #31 Oreca 07-Gibson.

WRT qualified poorly for the second race in a row but Habsburg was able to charge through the field from seventh on the grid in the opening stages, before Frijns passed Racing Team Nederland’s Frits van Eerd for the lead in the third hour en route to WRT's third win of the season.

The two JOTA Orecas finished second and third in the LMP2 class, with Antonio Felix da Costa, Anthony Davidson and Roberto Gonzalez having the advantage at the end of the eighth hour in the #38 entry.

This was after da Costa passed Tom Blomqvist with a bold move at Turn 1 in the final 10 minutes of the race.

Blomqvist, Stoffel Vandoorne and Sean Gelael headed to the final Bahrain race second in the standings in the #38 JOTA, but needed to finish ahead of WRT to have a shot at the crown.

The Pro-Am title went to Racing Team Nederland and its owner van Eerd after it finished first in class and sixth among all LMP2 entrants.

Van Eerd was sharing the car with ex-Formula 1 driver Giedo van der Garde - who took the overall LMP2 lead at the start - and Job van Uitert, but neither of the two were in contention for title having missed the Monza race in July. 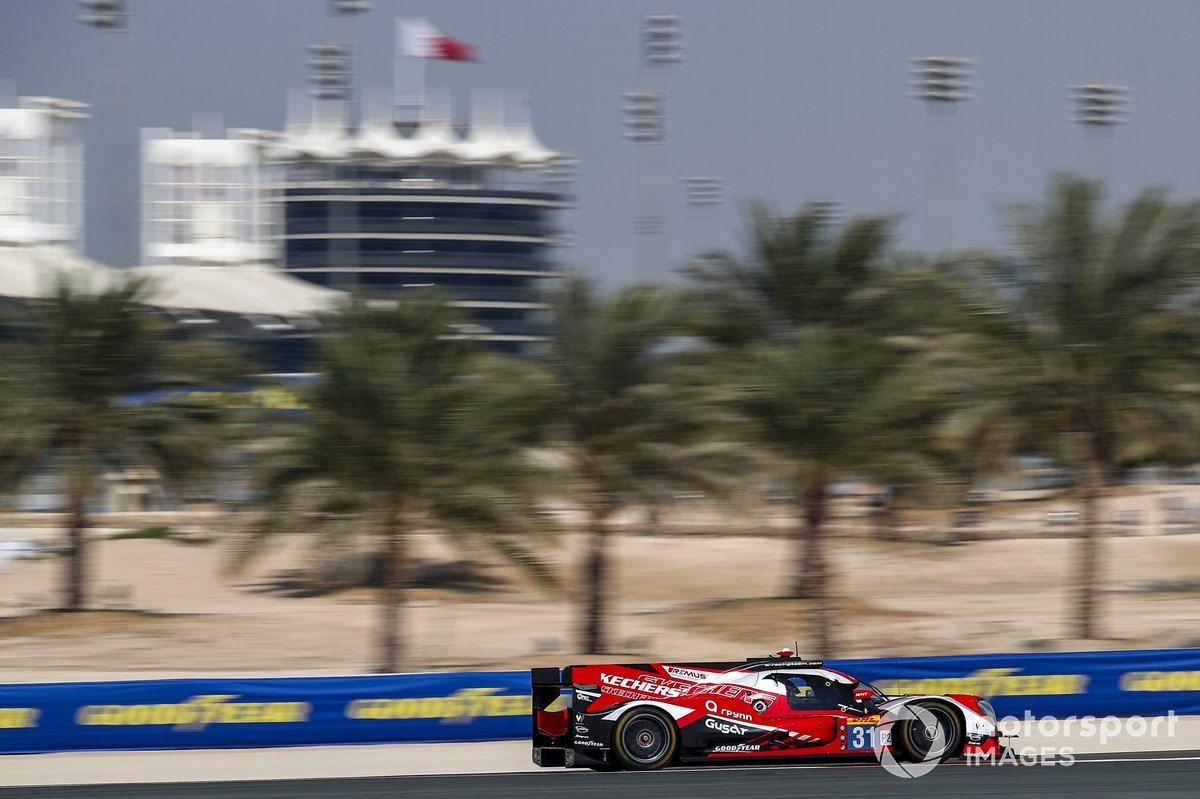 AF Corse triumphs in GTE Am

AF Corse successfully defended its GTE Am title after Nicklas Nielsen, Francois Perrodo and Alessio Rovera eased to a fourth victory of the season in the #83 Ferrari.

TF Sport Aston Martin was the only team that could have denied AF Corse the crown in Bahrain, but a puncture on the opening lap - caused by contact with the #98 Vantage GTE - left Ben Keating, Dylan Pereira and Felipe Fraga with a mountain to climb in the remainder of the race.

A broken steering rack, result of a separate collision with the #54 AF Corse Ferrari in the fifth hour, dealt the final blow to the title hopes of the #33 crew.

With TF Sport on the backfoot from the very beginning of the race, Matt Campbell, Christian Ried and Jaxon Evans finished second in the #77 Dempsey Proton Porsche, with Egidio Perfetti, Matteo Cairoli and Riccardo Pera completed the podium spots in the #56 Project 1 Porsche.