Lucas Luhr and Klaus Graf made it five American Le Mans Series wins in a row as Pickett Racing dominated at Road America, while the SRT Viper claimed a maiden GT win

Luhr had established a 16-second lead after just six laps but Katherine Legge jumped ahead of Chris McMurray at the start of what would turn into an impressive stint in the DeltaWing.

Legge and team-mate Andy Meyrick had turns at the head of the field as the pit strategies played out, before Graf took charge in the final hour.

A late safety car, caused by a big off for GTC driver Jan Heylen, meant the race finished under caution, and while the Pickett duo comfortably held on, Level 5 claimed a narrow LMP2 class success.

Scott Sharp led early on for Extreme Speed after Ricardo Gonzalez spun the leading #552 Level 5 HPD exiting Turn 3, and dropped to third behind the sister #551 car driven by Scott Tucker. He recovered one place in the pits, leapfrogging Sharp, and assumed the lead once Tucker pit on the hour mark.

Franchitti, who was quickest in qualifying, took over from Gonzalez and fought off a determined challenged from Guy Cosmo until the final pitstops, when the Extreme Speed car swept by into Turn 1 as the Scot emerged from the pits.

But both cars were jumped by Simon Pagenaud, who made a two-stop strategy work after taking over from Tucker to claim the lead - and subsequently, the victory - just before the yellow flags came out, denying a grandstand finish. 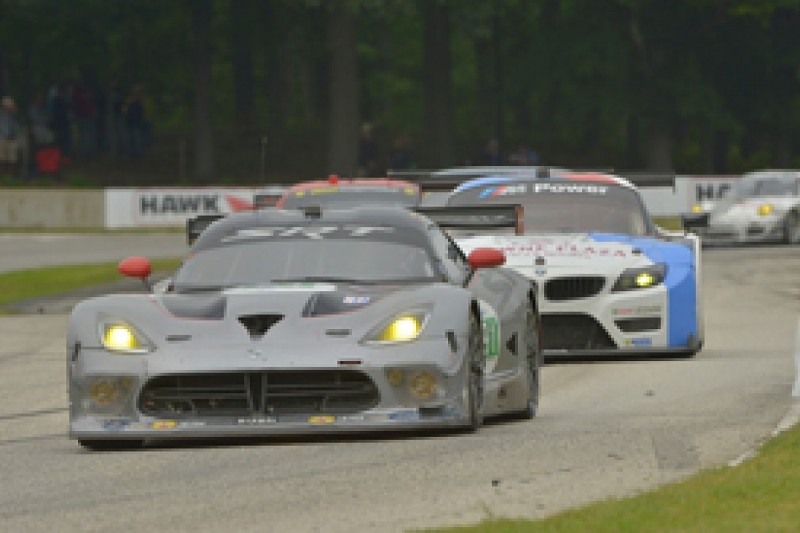 Dominik Farnbacher and Marc Goossens took the first GT win for the new SRT Viper, despite running very marginal on fuel in the closing stages of the race.

Jonathan Bomarito in the #93 Viper made the early running, but Farnbacher was soon in front in as a slightly jumbled order - caused by teams switching to dry tyres at different times - sorted itself out at the end of the first hour.

However, after a second caution period, it was the two Corvettes that led, requiring Goossens to hunt and pass the Antonio Garcia/Jan Magnussen car for the win 40 minutes from the end.

Garcia held on for second ahead of the sister car of Oliver Gavin and Tommy Milner.

The decisive moment came 45 minutes from the end when Pumpelly passed both Bleekemolen and Andy Lally as the pair almost forced each other off the track.

DeltaWing 'now a contender', according to its drivers