Le Mans hour 19: Alonso leads by more than one minute in Toyota #8

Buemi had held the lead at the end of the previous hour and was more than 40 seconds up on the sister #8 car of Mike Conway when a safety car period was called to allow for repairs to be made to drain covers on the outside of Tertre Rouge.

Toyota used that opportunity to bring the leading car in and swap Alonso in for Buemi, which allowed the #7 to take the lead when Alonso was held at pit exit until a safety car train had cleared the start/finish straight.

But Alonso quickly caught Conway on the restart following the safety car period - which lasted half an hour - before Conway dived for the pits at the end of the lap to hand over to Jose Maria Lopez.

Alonso now holds a lead of 1m12.704 seconds over the #8 TS050 HYBRID, bolstered by Lopez encountering a slow zone that was still in place at Tertre Rouge when he exited the pits.

The #3 Rebellion briefly dropped out of third place for the first time in 11 hours when Matthias Beche stopped under the safety car.

He was delayed by the team changing the nose on his Rebellion-Gibson R13 and then had to wait at pit exit at a red light, which allowed the #1 of Bruno Senna ahead, although Beche gained the place back when Senna stopped with five minutes of the hour remaining.

After the reappearance of the #11 SMP in hour 18, the 35 Ginetta returned to the track in the 19th hour with Mike Simpson at the wheel. 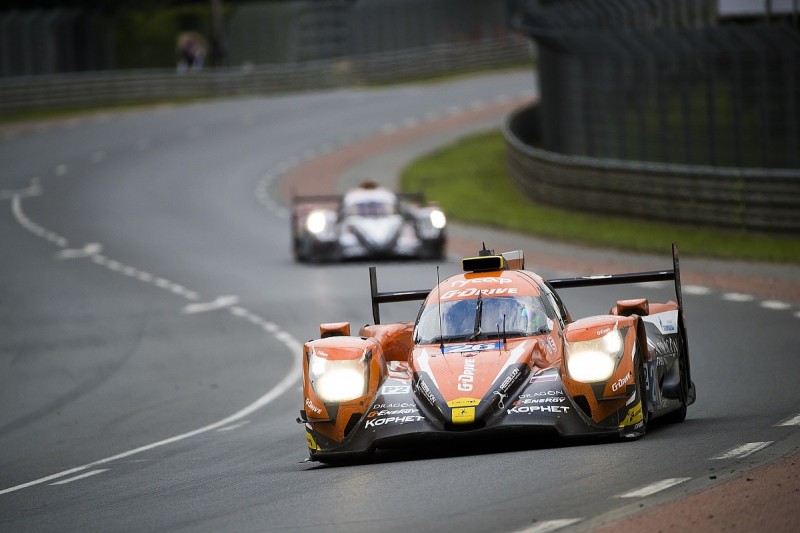 The #26 G-Drive ORECA continues to dominate the LMP2 division, having put another lap on the third-placed Signatech-Alpine approaching the hour mark.

Jean-Eric Vergne took over the wheel from Roman Rusinov and continued his unrelenting pace at the head of the field, which has become spaced out during the morning.

Will Stevens remains one lap down in second aboard the #23 Panis-Barthez Competition Ligier and is himself almost a lap ahead of Pierre Thiriet.

The #22 United Autosports Ligier had been fourth at the hour mark in the hands of Paul di Resta, but crashed shortly afterwards when the Scot made heavy contact with the concrete wall at the Porsche Curves. Fortunately, di Resta emerged unharmed.

Paul-Loup Chatin was fifth in the #48 IDEC Sport ORECA with Tristan Gommendy sixth in the #39 Graff So24 Racing ORECA ahead of the battle for seventh between Will Owen's #32 United Autosports Ligier and the recovering #28 TDS ORECA of Loic Duval. 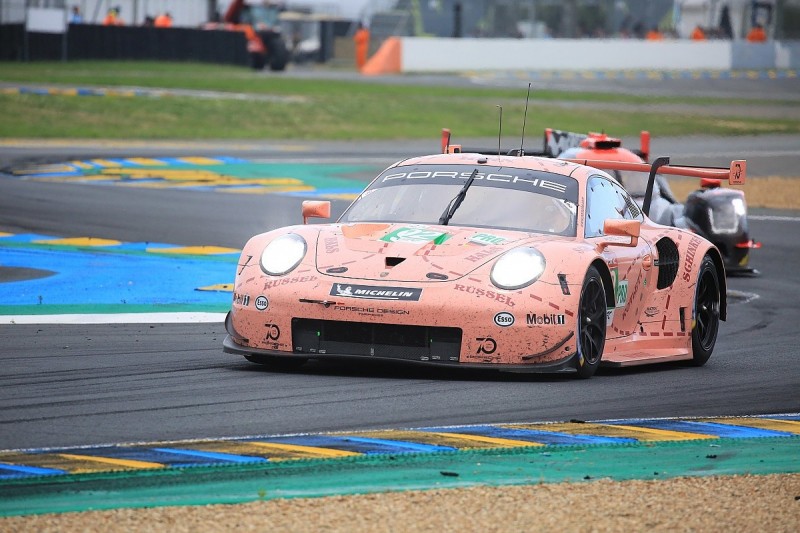 The safety car consolidated the lead of the GTE Pro class-leading #92 Porsche, which led in Michael Christensen's hands by 3m12s at the 19-hour mark.

However, the caution had the effect of closing the fight for second, with Gianmaria Bruni's #91 Porsche losing its 30s lead over the #68 Ford.

Dirk Muller ran just under five seconds adrift of Bruni at the top of the hour, while the #67 Ford - which jumped from sixth to fourth - had just taken a stop for Harry Tincknell to hand over to Andy Priaulx and was 58s in arrears.

Corvette's lead runner, the #63 of Antonio Garcia, has fallen off the lead lap, but holds a minute's advantage over the #69 Ford of Ryan Briscoe.

The sister #64 Corvette's woes continued when it was wheeled into the garage, while the #97 Aston Martin was also taken in for repairs with a loss of oil pressure.

Dempsey-Proton's #77 car continues to lead the GTE Am contest by 3m40s in the hands of Christian Ried over the #54 Spirit of Race Ferrari, now with Thomas Flohr at the controls.

Jeroen Bleekemolen was another minute back in the #85 Risi/Keating Ferrari.