Toyota's Jose Maria Lopez leads into the night after eight hours of racing at the 2020 Le Mans 24 Hours, as the second Toyota lost a lap due to brake issues.

The 88th edition of the race was interrupted after 5 hours 45 minutes when Alexander West lost control of his GTE Am #52 AF Corse Ferrari and hit the outside wall in Porsche Curves. The incident prompted a prolonged safety car period, in which the pack was split into three different trains.

The 30-minute safety car period brought the two leading Toyotas back together, the #8 Toyota TS050 of Kazuki Nakajima leading the #7 machine of Jose Maria Lopez at the restart by nine seconds and the privateer Rebellion car one lap down.

In the LMP2, GTE Pro and GTE Am classes the top three cars were separated from the rest of the field because they caught a different safety car train. That proved particularly costly for the #95 GTE Pro Aston Martin, which lost 1m30s on its #87 sister car and both AF Corse Ferraris.

The safety cars were soon sent onto the Circuit de la Sarthe a second time following a big crash for Tristan Gommendy in the #30 Duqueine ORECA at the first Mulsanne chicane, and then a third time to allow the marshals at the site of the crash to safely return to their posts.

Toyota used the lengthy barrier repairs to bring in its #8 Toyota TS050 for a full front-right brake change. The car driven by Sebastien Buemi, Kazuki Nakajima and Brendon Hartley had been suffering from overheating brakes for much of the race, but efforts to clean the brake ducts hadn't solved the issue.

Nakajima was sent back out again in third place, closely behind the #1 Rebellion and a full lap plus two minutes behind the leading #7 sister of Jose Maria Lopez, who shares the car with Kamui Kobayashi and Mike Conway.

A pitstop for Rebellion's Norman Nato released Nakajima into second place, but the #8 crew still faces a large task to bridge the six-minute gap to the leader.

The second #3 Rebellion followed another lap behind with Louis Deletraz at the wheel. The #4 ByKolles was stuck in the pits for repairs after its rear wing fell off in the Esses when Bruno Spengler was in the car, with the Canadian making contact with the wall.

In LMP2 erstwhile leader Gabriel Aubry was one of several drivers hitting trouble during the interruptions, grinding to a halt at Porsche Curves in his #37 Jackie Chan DC Racing ORECA. Aubry ultimately managed to limp back to the pits, but the entry is now out of contention for the class win.

United Autosports led the way in the #32 ORECA driven by Alex Brundle, which was driven to the front earlier by his team-mate Job van Uitert.

Brundle led the #26 G-Drive ORECA of Jean-Eric Vergne by a second at the eight-hour mark, with the second #22 United Autosports car of Filipe Albuquerque and the #38 Jota ORECA of Anthony Davidson jostling for third position.

James Allen managed to drag the #39 Graff Oreca back up to fifth after an off for team-mate Vincent Capillaire.

Alex Lynn headed the GTE Pro field in the #97 Aston Martin, defending a slender lead on the #51 AF Corse of Alessandro Pier Guidi. 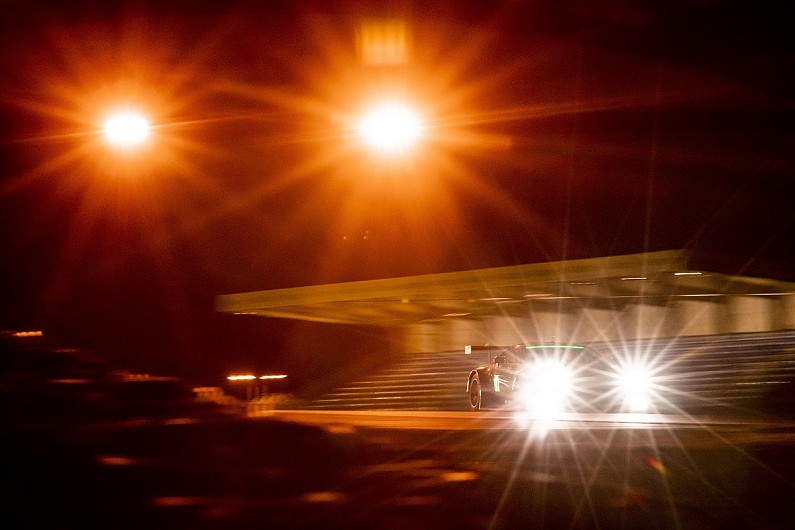 The #71 AF Corse lost a minute during the second safety car period and sits in third in the hands of Miguel Molina, with the second Aston Martin of Nicki Thiim a further 1m30s in arrears.

Porsche was left baffled by a lack of pace which meant it is not a factor at the front in this year's race. The #91 Porsche 911 RSR-19 of Richard Lietz is seventh in class, only ahead of the #92 sister car which lost over 12 laps due to a power steering failure.

In GTE Am the leading #75 Iron Lynx Ferrari of Andrea Piccini also suffered a power steering issues and was stuck in the garage at the eight-hour mark.

Nicklas Nielsen inherited the class lead in the #83 AF Corse Ferrari, closely followed by Charlie Eastwood in the #90 TF Sport Aston, Ross Gunn in the #98 Aston and Matteo Cairoli in the #56 Team Project 1 Porsche.