Jamie Chadwick secured her second consecutive W Series pole by finishing ahead of Beitske Visser and Alice Powell with a time of 1m28.681 seconds in qualifying at Zolder

Chadwick - who was fastest in FP1 on Friday and enjoyed a dominant opening weekend of the series last time out at Hockenheim - set her pole time in the final 10 minutes of the session, narrowly taking the top spot by a margin of just over 0.1s.

FP2 pacesetter Visser had held provisional pole for much of qualifying, becoming the first driver to set a lap under the 1m30s mark in the first seven minutes.

Visser's best lap of 1m28.797s kept her in second spot and ahead of Powell. 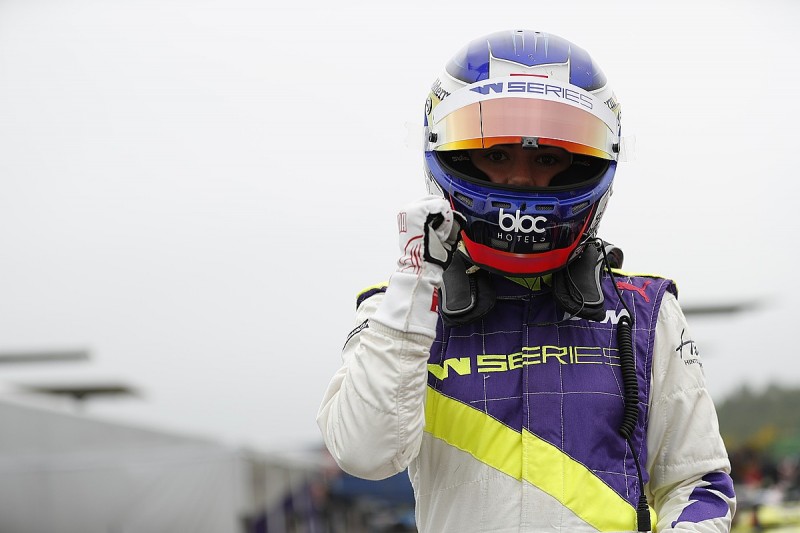 Fourth place went to Hockenheim podium finisher Marta Garcia, who set a time of 1m29.131s and was less than half a second away from Powell, choosing to set her flying laps in the latter half of the session.

The 2009 Ginetta Junior champion, Sarah Moore, finished behind her in fifth, with Fabienne Wohlwend and Tasmin Pepper sixth and seventh respectively.

Esmee Hawkey ended up the eighth ahead of former GP3 driver Vicky Piria in ninth place, as Gosia Rdest completed the top 10, which was covered by just over one second.

The second W Series qualifying session of its inaugural season ran with 19 cars, after the series granted reserve driver Sarah Bovy the opportunity to run in her home race.

Bovy was the first driver out on circuit and the first to set a flying lap, ultimately qualifying in 19th place.

Bovy's Fellow reserve driver Vivien Keszthelyi also ran in qualifying and will also make her race debut at Zolder, filling in for Emma Kimilainen who was taken ill on Friday and will not race in the second round.

Keszthelyi will line-up 16th on the grid.