Kimilainen, who missed the Zolder and Misano rounds due to injury, had been the fastest driver of the day in the first free practice session on Friday and had set the early benchmark time of 1m35.562s in the first stages of the 30 minute qualifying.

She was deposed briefly by home favourite and title contender Beitske Visser around the halfway mark, with Alice Powell - who endured a miserable weekend of retirements last time out at the Norisring - also occupying the top spot on the timesheets for a spell.

Kimilainen ultimately posted her pole time of 1m34.758s shortly before the session was red-flagged with four minutes to go as a result of a spin for Shea Holbrook.

Qualifying, which was held in dry conditions ahead of a predicted wet race on Saturday afternoon, was restarted as soon as Holbrook's car was recovered, with all drivers taking to the track to set their fast laps.

But the session was interrupted and not restarted when Vicky Piria suffered an engine failure, with Kimilainen retaining the fastest time. 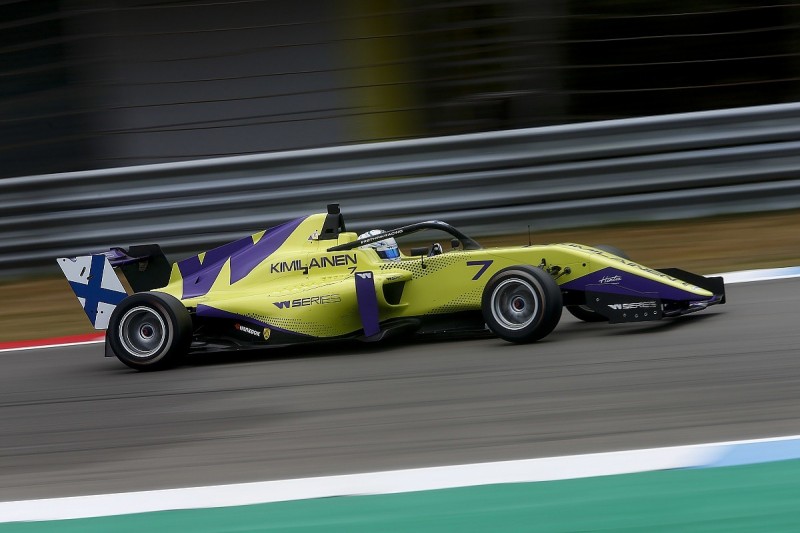 Kimilainen will start the race ahead of Powell in second, with championship points' leader and Williams Formula 1 development driver Jamie Chadwick in third.

Visser will line up alongside Chadwick on the second row of the grid in fourth place, with the pair separated by just 10 points in the inaugural title race.

Sarah Moore, who topped FP2 on Friday, qualified with a lap time good enough for fifth place on the grid, but incurred a five-place grid penalty for her Norisring clash with Holbrook and so will drop to the tail end of the top 10.

Caitlin Wood was sixth, ahead of Tasmin Pepper in seventh who continues her consistent run of top 10 performances.

Fabienne Wohlwend qualified eighth ahead of Norisring winner Marta Garcia, with both drivers also still having an outside chance at taking the first W Series drivers' crown with two races remaining.

Gosia Rdest completed the top 10, which was ultimately separated by less than a second in total.