Toyota team Racing Project Bandoh scored its fourth Super GT pole in six races this season in qualifying for this weekend’s Sugo round.

That was despite Sakaguchi being held up in the final part of the lap by the Nakajima Racing Honda of Takuya Izawa, who was summoned to the stewards for rejoining the track dangerously after an off at SP Corner.

Toyota secured a front-row lockout courtesy of Yuji Tachikawa in the Cerumo GR Supra, which was 0.378s behind the Bandoh car in second.

Nissan’s flagship NISMO Z qualified third in the hands of Tsugio Matsuda, 0.422s off the pace, but will drop to seventh owing to a four-place grid penalty.

This was incurred by Matsuda for accumulating seven penalty points, having crossed the threshold when Kazuki Hiramine’s Impul Nissan off the road during their battle for second in last month’s fifth round at Suzuka.

That promotes the Team Kunimitsu Honda NSX-GT, in which Naoki Yamamoto set the fourth-fastest time, to third on the grid, the best of the cars carrying a fuel flow restrictor this weekend.

Of the three cars carrying stage two fuel flow restrictors, only the Real Racing Honda made it out of Q1, with Nobuharu Matsushita qualifying fifth and being promoted to fourth on the grid by Matsuda’s penalty.

Yuichi Nakayama (SARD Toyota) and Ukyo Sasahara (Mugen Honda) move up to fifth and sixth, while Izawa was eighth in slowest in the Q2 pole shootout after his off. 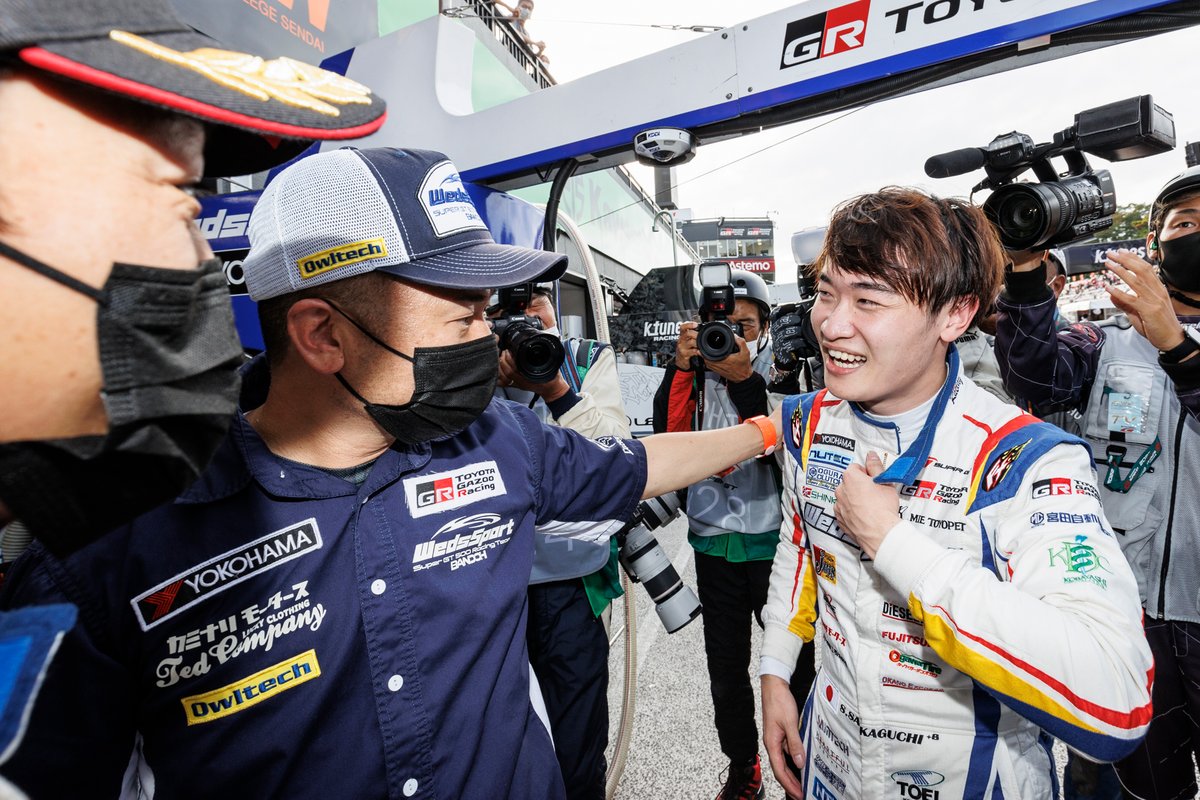 Sasahara's team-mate Toshiki Oyu had previously set a new lap record in Q1, which was later beaten in the second session by Sakaguchi on his way to pole position.

The #37 TOM’S Toyota and #3 NDDP Racing Nissan will start 10th and 11th respectively with their stage two restrictors after dropping out in Q1.

After its win last month at Suzuka, the points-leading Impul Nissan, the only car in the field with the stage three fuel restrictor, was 14th in the hands of Hiramine.

Starting from the back of the GT500 grid will be the #36 TOM’S Toyota of Sho Tsuboi and Giuliano Alesi, which failed to set a time in Q1 after running into mechanical issues.

Takagi’s time was enough to take the top spot by an impressive margin of 0.318s ahead of the works Subaru BRZ of Hideki Yamauchi.

Toyota team Racing Project Bandoh scored its fourth Super GT pole in six races this season in qualifying for this weekend’s Sugo round.

The Impul Nissan Z of Bertrand Baguette and Kazuki Hiramine scored an unlikely win from 15th and last on the grid in Sunday's fifth round of the Super GT season at Suzuka.

Nissan driver Ronnie Quintarelli scored a crucial pole for he and NISMO team-mate Tsugio Matsuda's Super GT's title hopes for this weekend's fifth round at Suzuka.