AUTOSPORT readers may well remember the inspiring story of Race2Recovery, the first amputee team to take on the Dakar Rally, chronicled in their blog 12 months ago.

It was an extraordinary tale, and this year they returned with a two-car team to do it all again.

At rest day you left us with just one of Race2Recovery's three vehicles left in the Dakar.

Both the rally cars went out on stage two, leaving the team's support truck to go it alone.

The T4, as it's known in these parts, would no longer be asked to support the team's Wildcats. Instead, it could focus on its own rally and the finish line in Valparaiso, Chile, which was still some 4709km away.

Race2Recovery's truck was purchased from a French Dakar team, Boucou, but it was originally designed as a quarry truck.

It still has electric windows and a plastic steering wheel cantered towards the horizontal like it is on a number 10 bus. It weighs around 14 tonnes, carries its own spares and wouldn't necessarily be your first choice for doing the Dakar.

The second week settled into the same pattern as the first. To complete a stage that the rally-leading Minis would conquer in a handful of hours, the truck would need to race all day and most of the night.

In the bivouac we got used to grabbing some sleep then waking up at 6ish to see it arrive, dodging the vehicles already departing for the next stage.

The mechanics would then have a couple of hours in which to turn it around, while the race crew tried to snatch some rest.

By mid-week they were so exhausted that the mechanics simply laid out camp beds that they'd sleep on in their race suits. Then they'd be woken up with 10 minutes to go and poured back into the cab.

Competing at the front of the field brings its own pressures but I challenge anyone who tells me that running at the back isn't even tougher.

"I don't even know where I am or what day it is," said Daniel 'Baz' Whittingham. "We're all just hanging on."

A bomb-disposal expert, 'Baz' was blown up in Afghanistan and lost his left leg below the knee. Now he was doing the Dakar as part of a three-man crew.

"On the special stages, it's my responsibility to adjust the tyre pressures and help with the navigation," he explained.

"The pressure of each tyre can be individually adjusted from inside the cabin, which can make a crucial difference in the sand. On the road liaison sections I also take a turn behind the wheel."

As the rally crossed the Andes, the team prepared to battle with the giant Chilean dunes.

In a cumbersome truck with a lofty centre of gravity and only a fraction of the power of the bespoke race trucks, it was no easy task. At the end of one stage, they had a steep 3km descent to the bivouac.

"That was emotional," said driver Mark Cullum at the finish.

"With so many vehicles having gone ahead of us, the track was heavily rutted and I was trying to stop the rear-end from sliding around too much. A co-driver in another truck got so scared he got out and walked down."

Cullum, who's an off-road expert and finished second in the Camel Trophy, reckoned that the stage was the toughest drive he'd ever done.

At times a finish looked unlikely as the crew battled the terrain, the clock and mechanical problems. On the penultimate stage out of the town of El Salvador they had to stop within a few hundred metres of the stage start to fix a problem with the steering.

Co-driver Chris Ratter is an exceptional mechanic but everything on the truck is supersized - the torque wrench is six feet long.

Technical support is banned once a competitor has started a stage and the rest of the team could only stand and watch from the roadside as the race crew battled to repair the truck. It was tough viewing.

Somehow they dragged themselves on and on Saturday afternoon near Valparaiso they completed the final stage. Then it was on to the city centre for a podium ceremony that went on until midnight.

"There were so many times when we really didn't think this was possible," said Whittingham, who becomes the first amputee truck competitor ever to complete the Dakar.

"It's been an incredible challenge. We use an expression in the army that when you're in hell you must keep going because there's always a way through. We've been to hell many times in the past couple of weeks but today we found the way out. We made it." 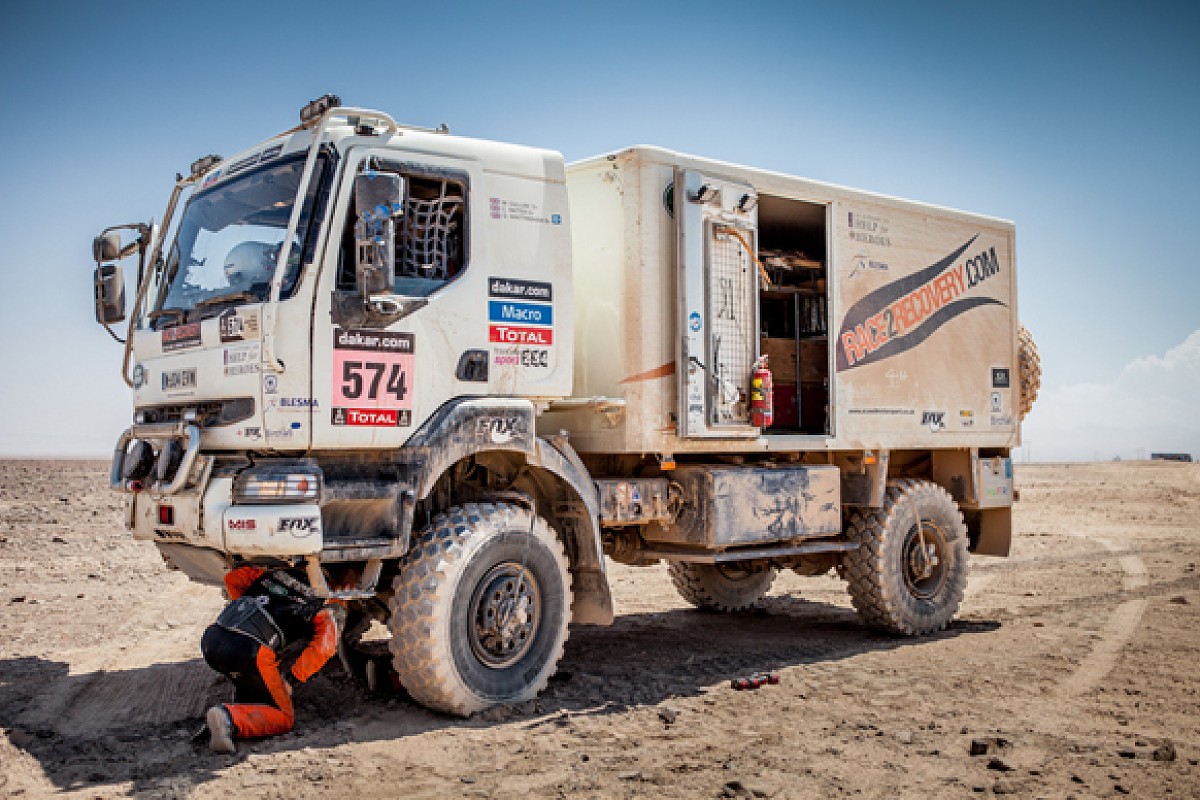