The life of Jo Bonnier was aptly honoured last weekend, as his ex-Lola T290 was guided to victory in Thudersports by Mark Richardson. While at Silverstone, Wayne Marrs and Tom Jackson battled the elements to win the British Endurance Championship encounter.

Shaking it down post-rebuild for next month’s Le Mans Classic, the celebrated RHS Chelsea garden builder, whose father Peter and uncle Jeremy competed against Bonnier in period, qualified third but tactically left the pitlane late for the rolling start. He made light work of passing Kiwi Warren Briggs’s ex-Fred Parkhill Donnybrooke Can-Am-contending McLaren-Chevrolet M8E for the lead on lap six of 20, before streaking away.

Benn Tilley (Formula Atlantic Modus) and Michael Lyons (F5000 Lola-Chevrolet T400) scrapped for Aurora Trophy gold amid the spray. Young Tilley made two seconds between Redgate and McLeans, which Lyons expunged on the blasts from Coppice to the chicane and past the pits.

No respecter of reputations, Tilley sailed imperiously round Lyons at Redgate having been outgunned. When they touched there on lap eight, the little Modus rotated and continued, but a red flag advantaged Tilley on countback. Austrian Martin Friedl (Brabham BT40) drove well to third.

Somewhat miffed, Lyons lapped the field on Sunday, cutting a superb 1m03.802s (111.66mph) best lap, before pulling off after Coppice when his engine threw a rod, triggering reds again. Not classified, therefore, the result was rolled back to when Tilley had briefly repassed Mike Bletsoe-Brown, whose F2 Chevron-BDG B27 spun under acceleration at Saturday’s rolling start. Behind Friedl and Stephen Barlow (F3 Ralt-Alfa Romeo RT3), the inspired Keith Norris – who qualified his ex-Mike Walker F5000 McLaren M10B in the wet on slicks, then sat out race one – shadowed Frank Lyons (F5000 McRae GM1) home sixth. 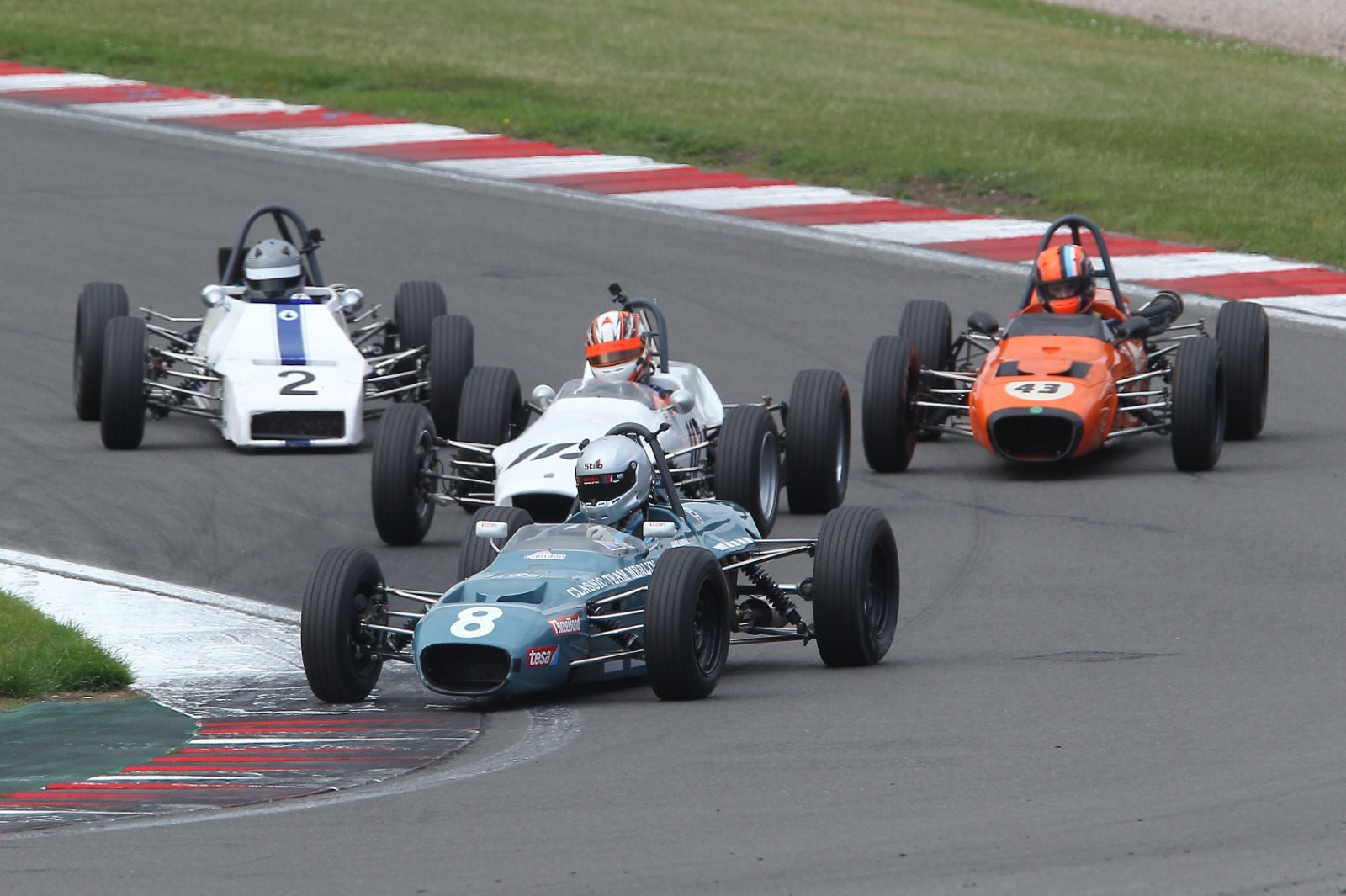 In a Historic FF1600 ‘war of the roses’, Yorkshireman Harrison won Saturday’s soggy battle from Lancastrians Tom McArthur (Titan Mk4, docked 10s for a yellow-flag infringement) and Callum Grant, who spun uncharacteristically. On Sunday, following a safety car, they were caught by Jamie Vinall-Meyer (Jamun T3), who started at the back having collided with McArthur the previous day. Into the chicane for the final time, McArthur moved left to avoid Harrison, who arrived via the grass, while Grant straight-lined it to avoid a melee, losing momentum. An ecstatic Vinall-Meyer burst through the resultant gap to take the chequer.

When he was excluded for failing a 40mm rideheight test and Harrison and McArthur were bumped to 13th and 14th for multiple track-limits violations, Grant was declared winner from Chris Porritt (Merlyn Mk20) and Ross Drybrough (March 709). Richard Tarling – back in Steve Deeks’s Crossle having shattered his SDC Royale RP26’s gearbox in testing – seized an opportunistic Saturday Classic FF1600 victory, passing Henry Chart (Van Diemen RF81) and McArthur (in James Hadfield’s ex-Gary Magwood Hawke DL2) with a lunge into Redgate after a caution period.

Historic FF2000’s ‘Simms and Fennymore Show’ continued, with Graham ambushing Benn into the chicane late on in race one – postponed to Sunday morning – for his fourth successive win after Simms caught a backmarker at McLeans, then “screwed up at Coppice”. When the duo ran wide at Redgate after the second start, 1979 Euroseries champion Adrian Reynard shot past and led gloriously for four laps. Simms then pounced to stem Fennymore’s run, with Reynard third. 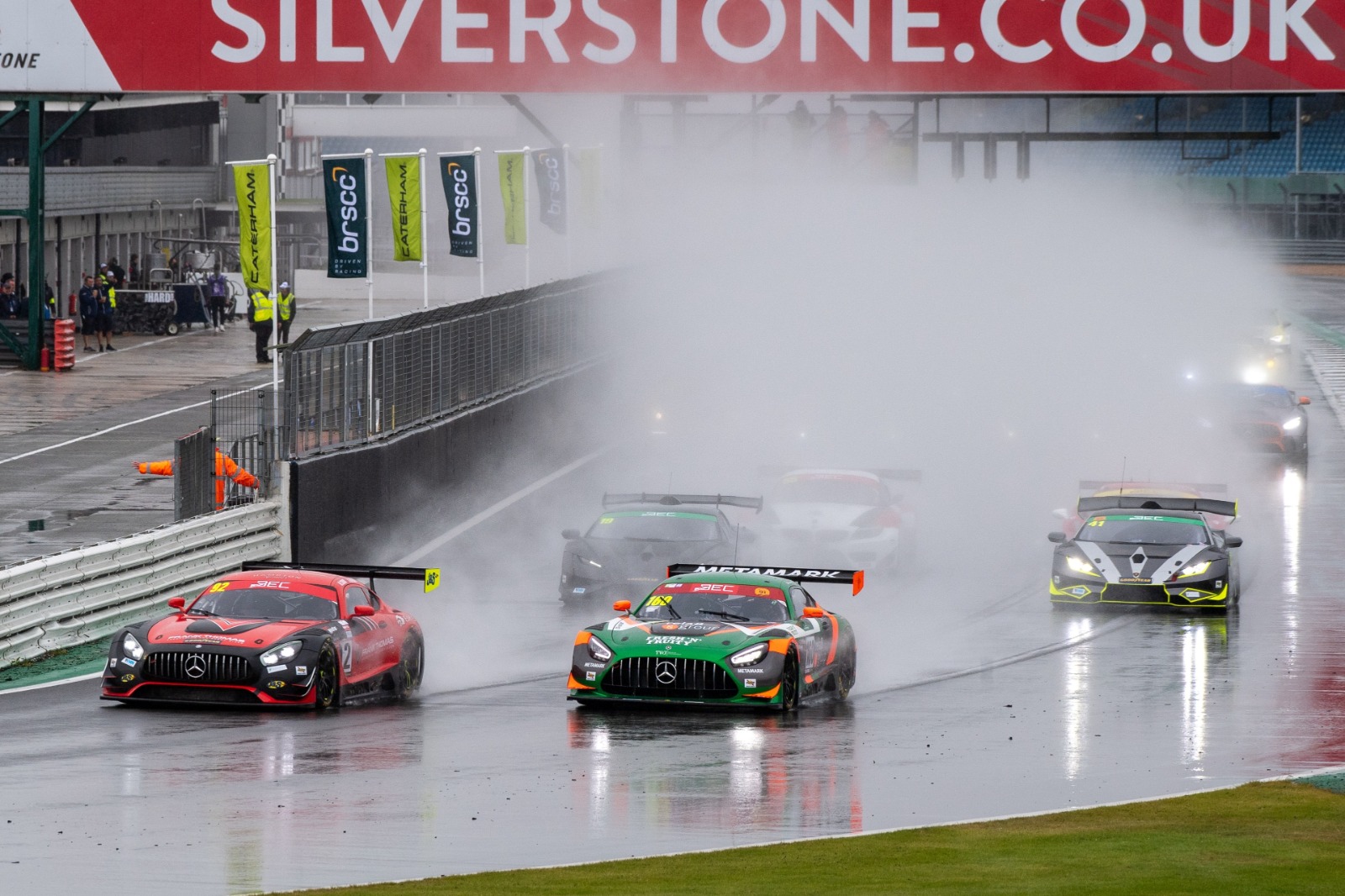 The UK’s heatwave well and truly ended at Silverstone on Saturday, as Wayne Marrs and Tom Jackson battled through a deluge to win the British Endurance Championship encounter.

Heavy rain prior to the start of the two-hour race left the Grand Prix layout covered in standing water, but polesitter Sacha Kakad was unfazed as he led the opening stages aboard the Simpson Motorsport Mercedes-AMG GT3, despite spinning on the sighting lap. Marrs initially held station in the similar Rob Boston Racing-run Mercedes behind, before being usurped by the BMW Z4 of Kevin Clarke, which had risen from eighth, on lap three.

After a brief safety car appearance to retrieve a stricken car – the only caution period of the entire race – Kakad resumed his push and held a lead of more than four seconds when he became the first of the frontrunners to make one of two mandatory pitstops after 30 minutes.

Clarke inherited the lead and remained at the head of the field until well into the second hour. After relaying to Ian Lawson, the ING Sport BMW rejoined third with the Marrs/Jackson Mercedes leading from Hugo Cook, who had taken over from Kakad, the Simpson Mercedes delayed by refuelling problems and suffering from a gearbox issue. Cook’s 42s deficit proved crucial, since it allowed Marrs to serve a drivethrough penalty following a pitstop infringement and still rejoin with a lead of 12s.

After relaying to Jackson for the final stint, and with purple sectors lighting up the timing board courtesy of a drying track, the Mercedes duo came home comfortable winners by more than 42s. “I think most of it was won in the pitlane, the boys made some quick pitstops and we jumped the guys [we were racing],” said Jackson.

Kakad took over for the final stint in the Simpson Mercedes to finish second, while Ryan Lindsay completed the podium aboard the ING BMW. Behind, the RaceLab Lamborghini Super Trofeo Evo in the hands of Claude Bovet and David McDonald went under the radar on its way to fourth overall and the Class B spoils.

Class D winner and fifth overall was the Porsche Cayman GT4 of Formula Ford driver Ian Gough and Euan Hankey, who was initially due to share driving duties with Lucky Khera before Khera pulled out due to back issues. The RaceLab-run machine stormed through the order after starting from the pits due to an “admin error”. Sixth and Class E winner was the Cupra Leon of Ashley Woodman and Martin Byford, while 2007 British GT champion Bradley Ellis guided the RNR Performance Cars Ferrari 458 Challenge to the win in Class C alongside new outright championship leader Chris Goddard. 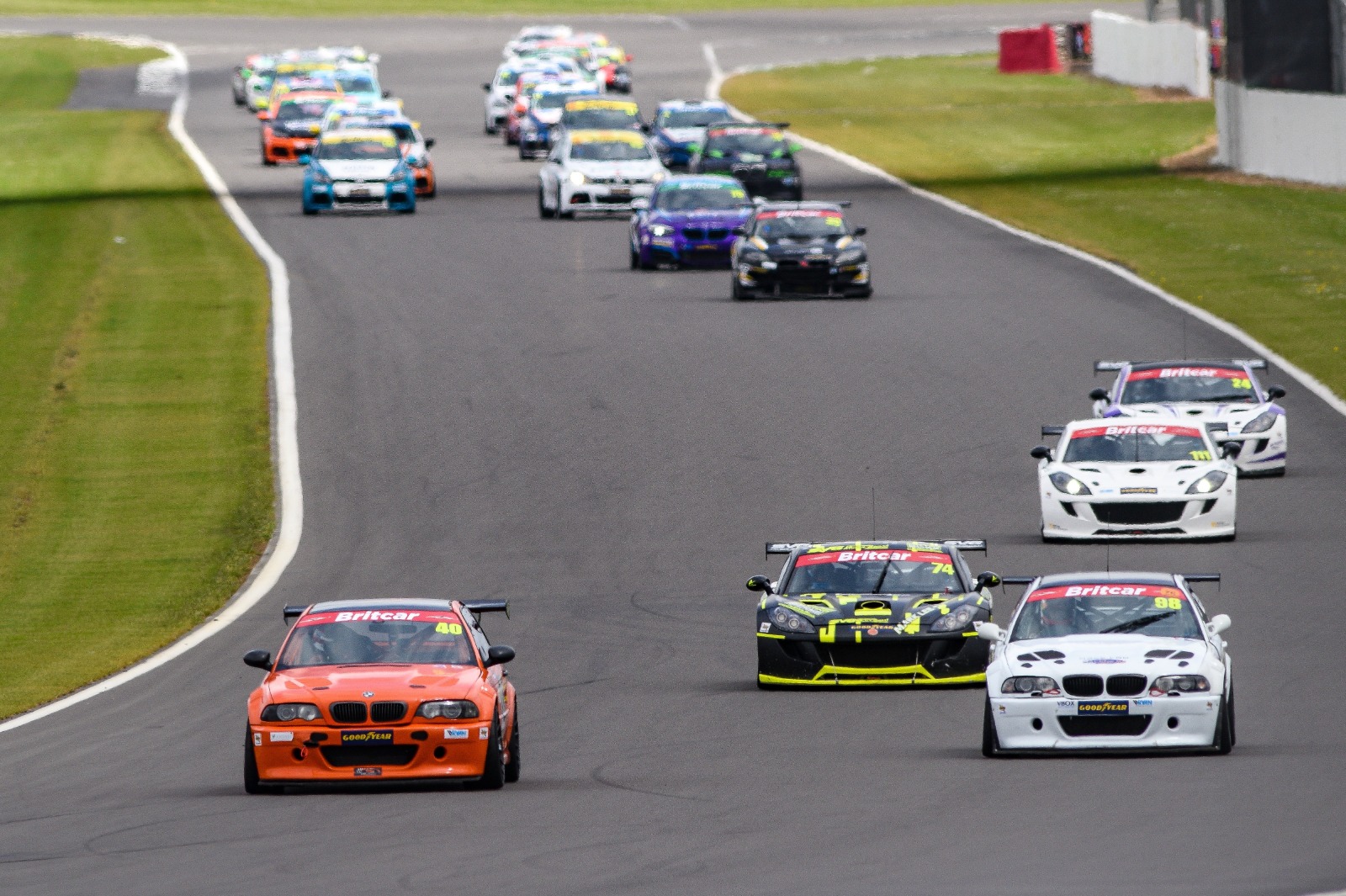 In Sunday’s first Britcar Trophy race, Bryan Bransom survived a suspected fuel surge and last-lap challenge from Mark Lee to win alongside Jasver Sapra in their BMW M3 E46, having chased down the Ginetta G56A of Lee and Owen Hizzey after the pitstops. In the sequel, Lee/Hizzey comfortably took the win after passing the G56 Academy car of Neil Wallace at The Loop.

Harry George claimed Saturday’s opening Caterham 310R race after rising from 18th on a damp track, while James Wingfield and Stephen Lyall completed the rostrum, the trio covered by less than a tenth. Unusually for Caterham racing, Jack Sales cruised to victory in a dry race two after breaking the tow to the chasing pack on the opening lap. Tom Cockerill got the better of Ross McConachie by just 0.001s for second.

Taylor O’Flanagan was victorious in the first 270R contest but had to give best to Domenique Mannsperger in race two, Mannsperger grabbing the lead around the outside of Brooklands on the final lap.

A safety car negated Geoff Newman’s healthy lead in the first Roadsport race, with Freddie Chiddicks finishing on top from William James as rain began to fall on the last lap. Newman took fourth on the road but was promoted to third after Charlie Lower was handed a penalty for exceeding track limits. Newman wasn’t to be denied in race two, holding Chiddicks at bay for the duration of the final lap after a race-long battle.

James Abbott rebuffed Mike Jenvey in the first Zeo Prototype Series race, his Revolution 500SC proving quicker on the straights but slower in the corners, before the Jenvey Gunn TS6 conked out at half-distance. Abbott was unchallenged in the sequel.

Reports by Marcus Pye and Stefan Mackley. Photography by Mick Walker and Ollie Read. Want more reports from the world of national motorsport? Subscribe today and never miss your weekly fix of motorsport with Autosport magazine 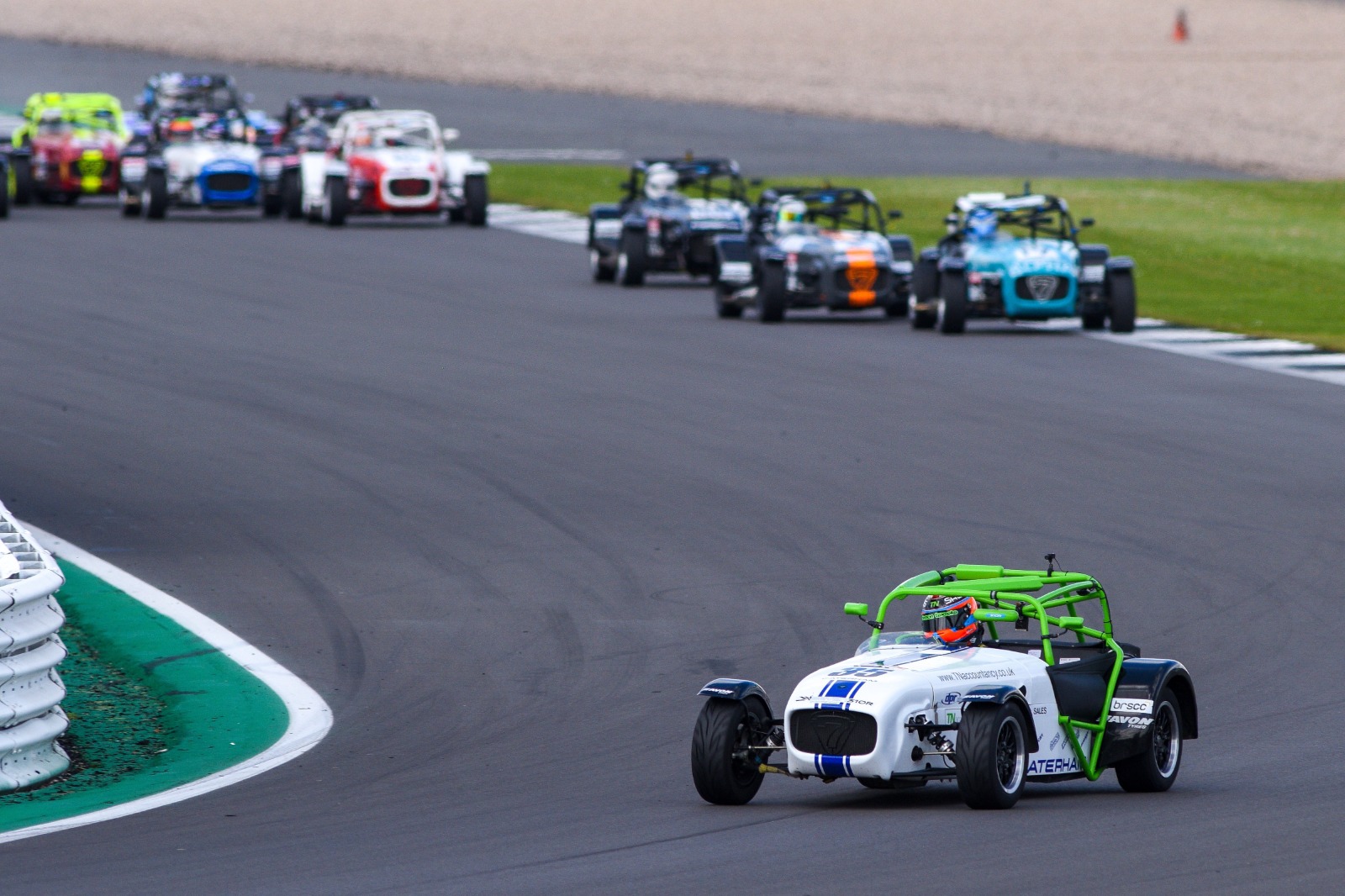