Alex Dunne’s domination of British Formula 4 reached record-breaking proportions at Thruxton. That he has been the standout driver this year is undisputed, but he has now claimed the most wins in a single season in the FIA F4 category’s history having taken his tally for the year to 11 last weekend.

But more important to the Irishman than that piece of F4 history is the size of the points lead he now enjoys. With closest rival Oliver Gray having an event to forget, Dunne’s advantage has grown to 106 and he is on the brink of sealing the title next time out at Silverstone.

Of Dunne’s near-dozen victories, the triumphs around the Hampshire speedbowl were not his most dominant – but they did not need to be. Although, admittedly, he was hindered by safety car periods in each of races one and three.

Much of the first half of the opener was behind the pace car and the Hitech driver was initially under some pressure from Carlin’s Ugo Ugochukwu on the restart, before edging clear by a second, while Louis Sharp completed the podium.

Dunne’s victory was especially significant, as Gray was eliminated when Georgi Dimitrov and Eduardo Coseteng tangled at the Complex. “It’s helpful to extend the championship lead by 25 points, but it’s unfortunate for him [Gray] – I don’t like to see that happen,” admitted Dunne.

The finale was a very similar story, Dunne winning again and Gray once more being involved in other drivers’ incidents. Dunne was briefly threatened off the line with Ugochukwu edging ahead at Allard before Dunne then nosed clear through the Complex. He did not look back thereafter, successfully negotiating a two-lap restart at the end.

There was more joy for Hitech in the partially reversed-grid second bout with Oliver Stewart leading throughout from pole to take his maiden win. He successfully fended off the closing Coseteng, Daniel Guinchard and Joseph Loake, but none of the trio were quite able to mount a challenge.

Further back, Dunne reminded everyone he was human by making an error as he attempted to pass the resolute Adam Fitzgerald for sixth at Club, succeeding only in spinning. Gray will need his rival to make more significant mistakes than that at Silverstone to maintain his slim title chances. 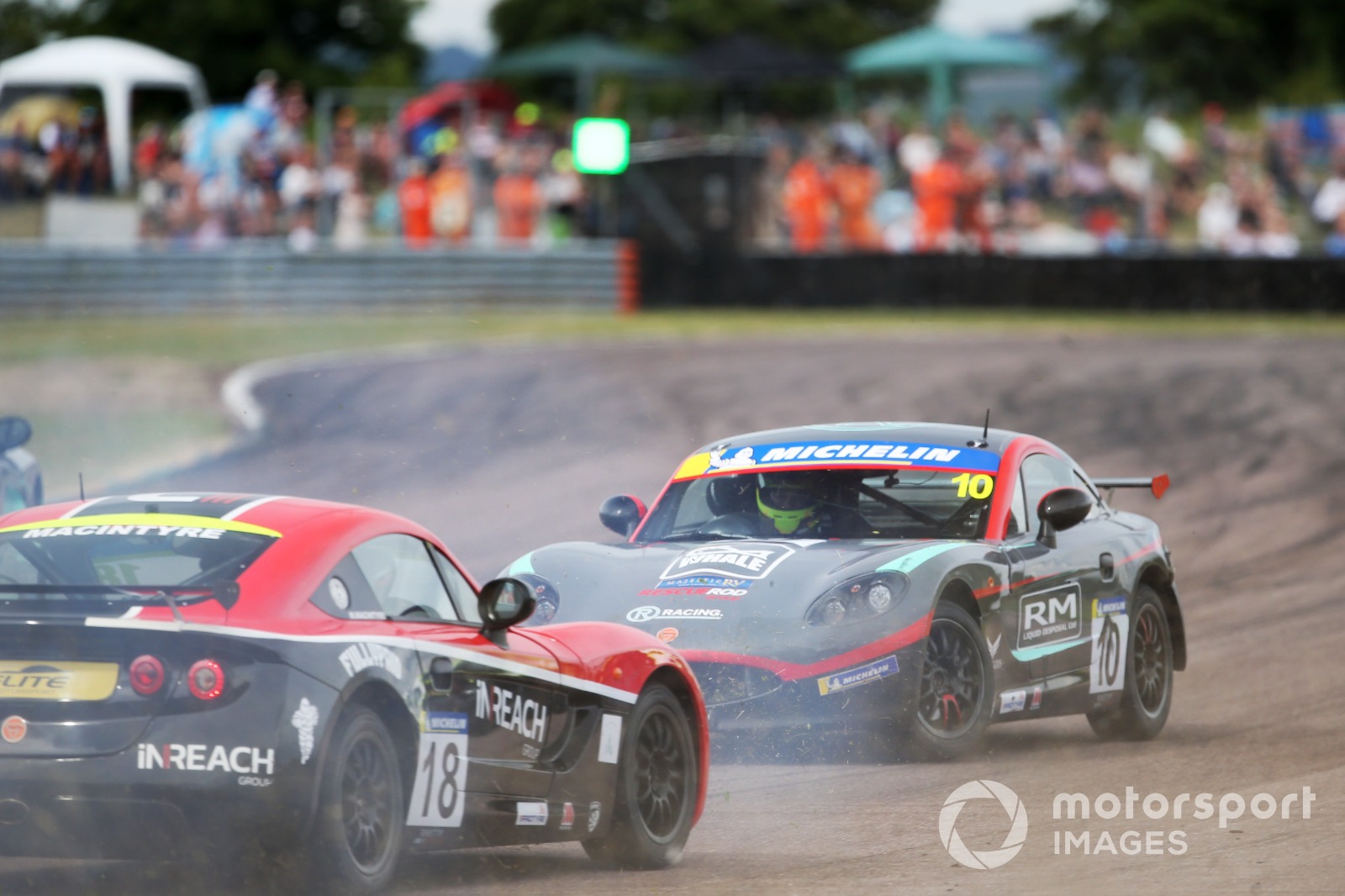 Thruxton is the closest circuit to the Dorset home of Josh Rowledge, but even he can’t have previously explored the grass bordering the track to quite the extent that he did last Sunday. That the Ginetta Junior points leader did so twice – and backwards on one occasion! – yet still won the finale was the most remarkable feat of a sensational weekend of slipstreaming action.

On the third lap, Rowledge’s R Racing car was forced off at the gentle left-hand kink on the run to the Complex. Yet he kept his foot pinned, sped across the grass and rejoined the track at Cobb in the lead. The following lap, he clashed with Kanato Le at the same spot and this time spun backwards, dropping to eighth position.

One by one Rowledge picked off the cars ahead, reclaiming the lead on the ninth of 10 laps when he passed Joe Warhurst into the Complex. Contact between Warhurst and Sonny Smith on the final lap allowed Rowledge to give them the slip.

Rowledge’s win in race two was less satisfactory. As the 10-car lead pack entered the chicane on the final lap, he received a hit from Harri Reynolds, so bypassed the chicane entirely at full pelt. Somehow he escaped a penalty, somewhat robbing Zac Meakin, who took advantage of mayhem between Reynolds, Will Macintyre and Liam McNeilly to sneak into second.

The first race was a belter too, with on-form Elite Motorsport driver Macintyre just getting the verdict from Rowledge after long-time leader Le fell down the order. 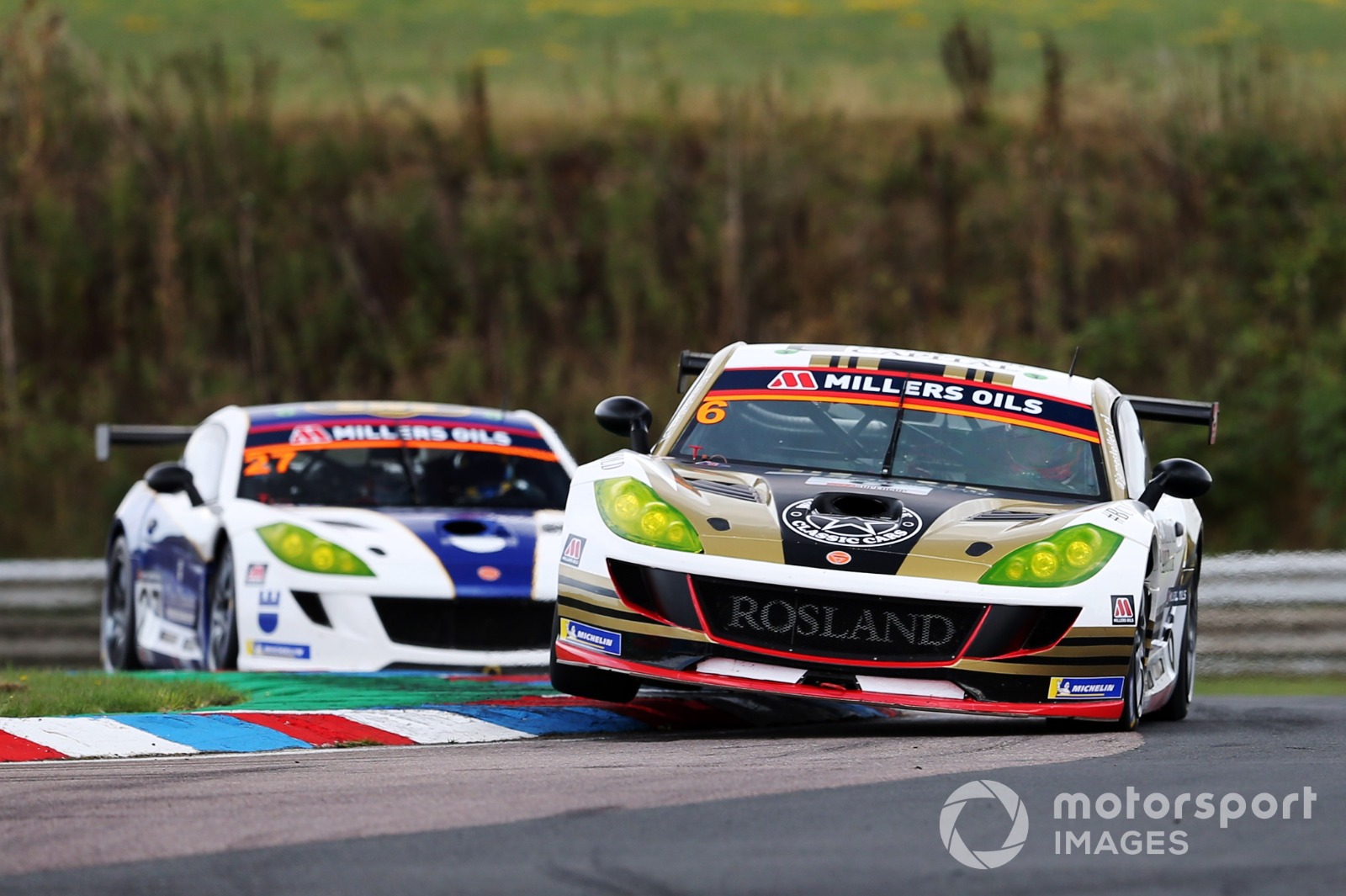 The terrifying race-two crash for Mike Brown and Colin White was at the forefront of the Ginetta GT4 Supercup paddock’s mind at Thruxton last weekend, but the event also featured more success for James Kellett as he drew level with the record for the most wins in a season with 11.

It had looked like Century driver Kellett would have a real fight on his hands for success as ever-improving Elite Motorsport racer Tom Emson impressively qualified on pole by over two tenths. But his G56 was hobbled come the opening race with engine woes severely hampering his performance and that enabled Kellett and Aston Millar to blast ahead on the opening tour and left Emson having to settle for third.

Emson was then putting Kellett under pressure in the restarted second contest before the leader ran wide at Church, kicking up dirt and dust that smashed Emson’s windscreen. Once again, the youngster was left to settle for third, having been barely able to see out of the battered window, when he felt the win was on.
“It just started caving in and there was nothing I could do,” said a disappointed Emson. “Going down the straights, it started cracking all the time – I was worried it could cave completely in.” 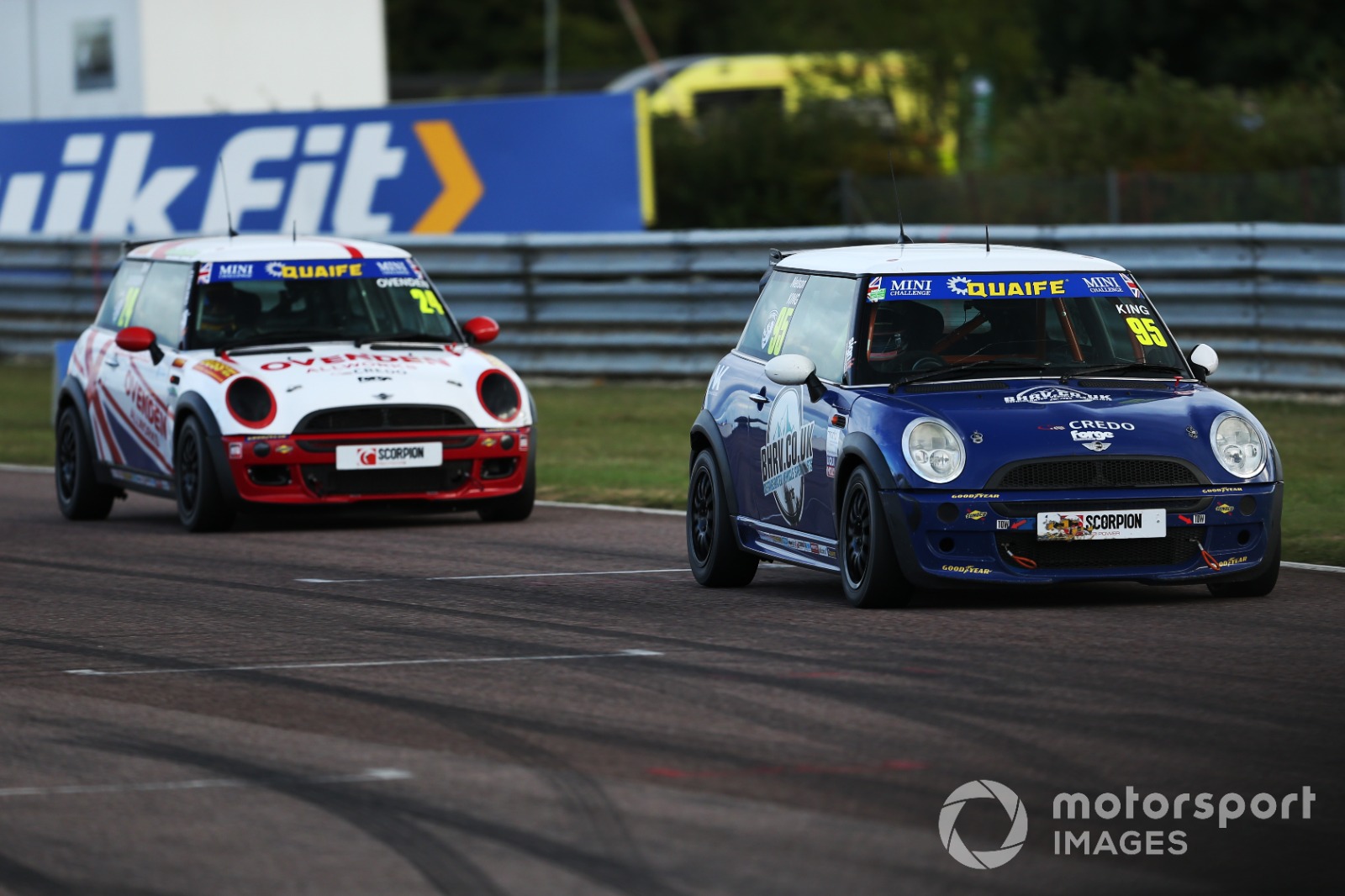 It was not just the GT4 Supercup that had its second race red-flagged for a serious crash, as there was also a sizeable shunt for Jonathan Sargeant in the Mini Challenge Trophy. Aside from that, there was some super racing at Thruxton as Tom Ovenden claimed a first win of 2022 before series dominator Nelson King demonstrated his prowess in race two.

Two safety car periods meant the opener was a stop/start affair, but that did not faze Excelr8’s former rallycross star Ovenden as he resisted pressure from behind on each restart to win from team-mate Matt Hammond, first-time podium finisher Jack Byrne and King.

But the long delay for the Minis to then complete another full racing lap was worth the wait as the second encounter was a cracker. Ovenden and Hammond initially pulled clear before being reeled in by Charlie Mann and King.

King passed Mann at Allard on lap four of eight, then followed Hammond’s lead when he demoted Ovenden at Church. And King then reigned supreme with a brilliant move right up to the pitwall approaching Allard to take the win.

“I didn’t expect that!” said King, who used his race-one experience to identify his rivals’ weak points. “I was just trying to keep my nose clean and then opportunities kept coming.” 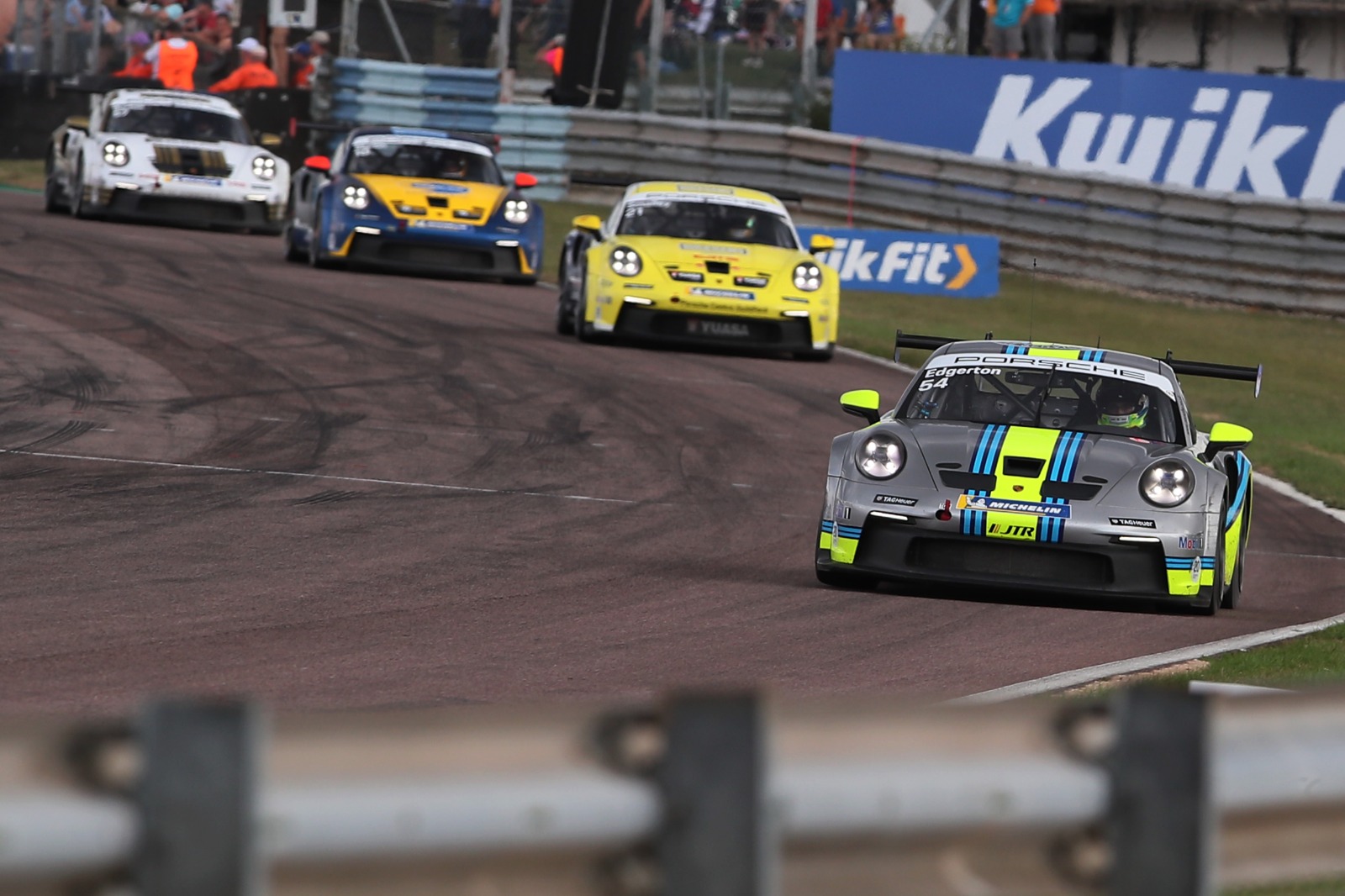 The Thruxton Porsche Carrera Cup GB weekend was all about two drivers who have slipped out of realistic title contention as Gus Burton and Theo Edgerton claimed the spoils, while Will Martin dramatically cut Kiern Jewiss’s points lead.

It was Martin who set the pace in qualifying, posting a time just 0.059 seconds faster than Burton, while Jewiss was four tenths adrift and down in seventh. But it was clear from the very start that Martin would face a fight on his hands to convert that pole into a fourth win of the season.

Century driver Burton challenged Martin into the Complex on the first lap and then spent the next eight tours glued to the rear of the Richardson Racing machine. Martin was regularly locking wheels in his attempts to cling on to the lead but the pressure eventually told on lap nine of 20 when he put a wheel on the grass into Allard. That was all the invitation Burton needed to take the place, and he stretched out a 5s lead by the flag. “Unless he made a mistake, I didn’t think I was going to get past,” admitted the delighted victor.

While the battle for the lead was over, all eyes were on Adam Smalley’s attempts to fend off Edgerton for third. The Redline racer was on a different strategy to his rivals, opting to use more tyres in a bid to boost his qualifying position. Nevertheless, Smalley just clung on from the JTR driver, while Jewiss climbed to fifth after a great move on Matty Graham around the outside of Campbell.

Martin and Burton battled again in race two, this time behind reversed-grid front-row starters Edgerton and Smalley. Fast-starting Martin did edge ahead of Smalley at Allard but the Porsche GB Junior was back ahead at the Complex and that proved to be Martin’s only chance of making a move, Smalley finishing 2s behind maiden winner Edgerton – who has now become the sixth different victor this year.

Instead, Martin found himself with Burton in his mirrors again. But, even with backmarking debutant Nick Jones inadvertently getting in the way, Martin was able to stay ahead this time to complete the podium. With Jewiss again fifth, Martin has narrowed the gap to just two points with four races to go.