The international karting paddock has witnessed its fair share of talented British drivers in recent years.

George Russell, Lando Norris and Enaam Ahmed all impressed in British championships before going on to win major international honours. But all have had the support of major karting teams to help in their development and rise to the top.

The step up from British to international racing shouldn't be underestimated, though. A sufficient budget is one necessity, but it wouldn't be worthwhile if the young driver is going to be simply running around at the back of the field. With a season's experience of IAME Cadet racing in Britain under his belt, during which he won races against fierce competition, Cian Shields is stepping up to the X30 Junior class in 2018, taking on the big boys in the European karting arena as a privateer.

It sounds a daunting prospect: a 13-year-old, competing alone against the big, professional teams with big budgets, in the sprawling European paddocks. But early-season results are proving that preparation is the key for Shields' first venture outside the UK. After beginning his career taking part in club championships stretching from his local Larkhall circuit to PF International, Shields is determined to prove that you don't have to be part of a multi-driver, high-cost team to get success.

Shields' 2018 schedule is a packed one: he'll be competing in the four-round IAME Euro Series, the five-event Spanish X30 Junior championship, X30 O-Plate in Mariembourg, Belgium and, if time allows, the odd round of the British-based Little Green Man series.

Alongside Shields is trusted mechanic Jim Baillie, and driver coach - and karting ace - Dean Macdonald to fine-tune his knowledge of the European circuits. Macdonald, who will continue into his second year of British GT this year in a Toyota GT86, was the 2012 MSA British Cadet and 2014 Super 1 MiniMax champion. He also competed on the European scene.

Shields' early-season form has already given a demonstration of his abilities, and boosted his growing reputation. Up against a grid of almost 50 other drivers, Shields took third place in the final of the recent Valencia Winter Cup in Spain, a warm-up to the opening round of the IAME Euro Series.

"The racing in Valencia was a really exciting challenge," Shields says. "I was up against more experienced international drivers from throughout Europe and it was my first major competitive race in the Junior X30 class. Making the final was a success from such a big grid, but I was confident that I could make a good impression. I was on the outside on the grid in each outing so I needed to make some moves to get past drivers to make my way up towards the podium places in the final laps."

Macdonald, who has coached Shields for over 12 months, was impressed with how quickly and easily his fellow Scot made the step up into the 125cc, two-stroke Junior X30.

"Cian quickly adapts to every kart and circuit that he races on," Macdonald says. "We began at Larkhall on his first day in an X30 kart. We started him out in a Mini X30 machine to gradually build him up and get used to the size, power and grip differences from a Cadet kart. He was very comfortable and settled extremely quickly; nothing fazed him.

"When we go testing, he doesn't need telling twice. He'll pick up your advice and immediately put it into action. He's a very intelligent driver. He's not been karting too long, but Cian is just a naturally fast racer. He's already mixing it with kids who have been competing for more years, so in my opinion he's a very promising driver." 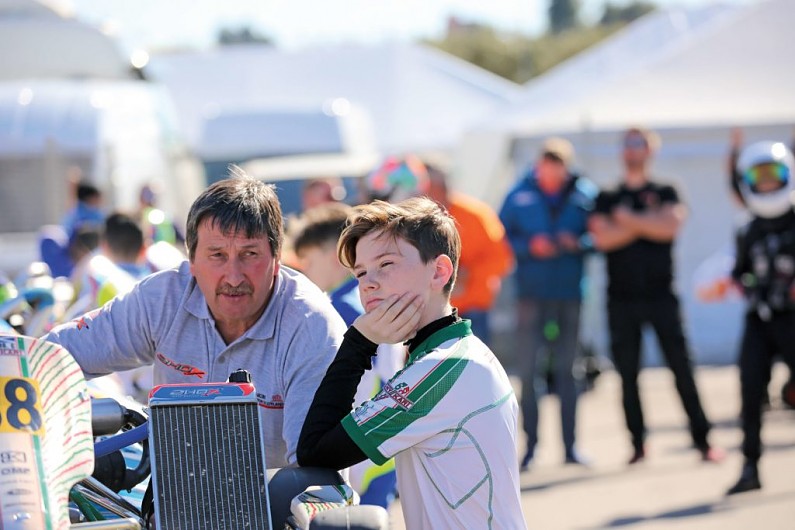 As the youngster grows and matures, they must focus on their physical fitness to meet the demands of higher g-forces upon their body. Shields uses boxing as a way of maintaining and building his fitness levels as he grows.

"I've been very impressed with Cian's physical fitness," Macdonald explains. "Most drivers struggle with this when they move up and out of Cadet racing. Their neck in particular is the part of the body that needs to be strengthened the most as the X30 has more grip in the middle of the corner, so you have to hold on a little more. That does mean that you have to have a strong neck and upper body.

"This is even more important in European karting as the tracks have a more fast-and-flowing nature, so you're able to keep to a higher average speed, whereas the British circuits are much tighter, producing a stop-and-go type of racing using more of the brake. In Europe, it's more about set-up and keeping your foot on the gas; you're able to carry much more speed into corners than at home."

Macdonald doesn't believe that competing as a privateer will affect Shields' ability to regularly race at the front of the field this season, and has high expectations of his driver: "I've tried to instil in him that whatever you do, you can always do better. Even the things he's very good at, we can always improve. He can always be faster, or more consistent.

"As long as you have experienced drivers around you who have been there and done it, then all I and his mechanic can do is prepare him before he goes on to the track, and the rest is then up to him. I don't think being part of a team matters.

"Judging by his result in Valencia and his testing ahead of the start of the IAME Euro Series, I think he'll find that success comes rather easily, to be honest. Consistency is the key. If you're regularly towards the front of the field, staying out of trouble, you're going to collect points. He needs to stay with the quickest drivers who don't always go all-out for a heat win, but keep it all for the final.

"My target for Cian is for him to be inside the top three to five drivers in each championship he's competing in this season. That's more than possible." 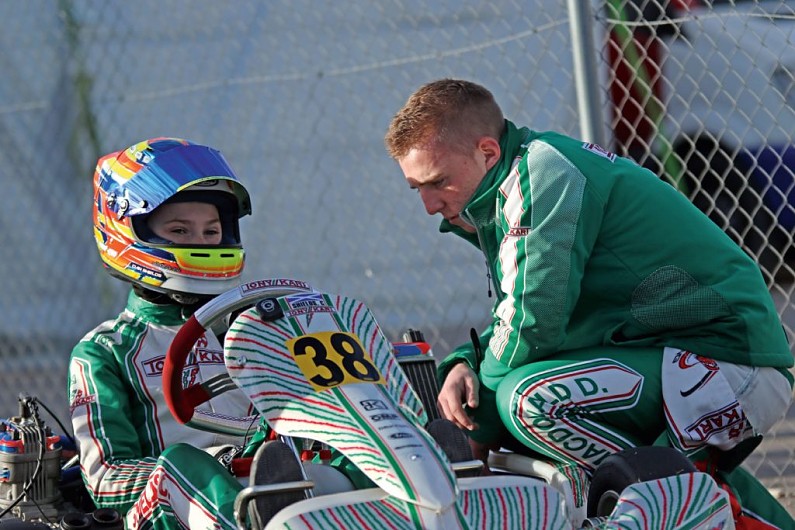 Preparing for the privateer challenge

"The grids are bigger and the paddock seems to be more professional and organised," Cian Shields notices soon after he enters a European paddock for the first time.

"The facilities such as clubhouses and grandstands are far bigger and better than the majority of tracks in the UK. There are strict cut-off times on the timetable which if you miss, you lose track time or the whole race itself. But it's a relaxed atmosphere, albeit a very busy one."

Living so close to Larkhall in Scotland has had its benefits for Shields. He soon became acclimatised to wet-weather driving, and is now seeking to gain experience in drier conditions on the testing tracks around Europe.

"I've been able to get used to racing in torrid weather from an early age," he says. "So now going overseas, where the weather is generally better, will help me to gain more experience of racing and tyre management.

"Learning and understanding the circuits will be one of the biggest tasks this year. The British tracks are very tight and you're focusing on getting the kart into and out of each corner in the best way possible, whereas in Europe it's all about keeping the kart smooth because there are many long straights."

One of the most appealing prospects for Shields is the large grid numbers, which he sees as positive motivation to improve his racecraft and confidence.

"The grids are much bigger and they're much more competitive than in the UK, because you're coming up against more experienced drivers," he says. "Because of the bigger grids, though, some sessions are shorter. That means I've got to be focused all the time, not miss a session and make every second of track action count.

"As it's more competitive, it brings you on as a driver at a quicker rate. The tracks are a lot bigger and more technical. Some of the corners flow better, with others being tight so you have to adapt pretty quickly."

Shields explains that, compared to its British equivalent, the X30 Junior engine used in Europe is quite different. He will also gain further experience with differing tyre compounds this season.

"The engines are much quicker in Europe as the engine and some parts are different to the UK model," he says. "In Europe, the restrictor on the X30 exhaust bend is fixed at 29mm rather than 26mm in Britain, which enables you to have a lot more power down the straight, and out of the corners so you can accelerate quicker.

"The tyres in the IAME Euro Series are the same Komet-produced rubber as in the UK. But the Spanish X30 championship uses Vega tyres, which are much grippier. I'm therefore going to get a lot of experience racing on different compounds of tyres, which will set me up well for whatever I do in future motorsport."

Shields' performance at Valencia, as well as his pre-season testing, has boosted his confidence. He says that competing as a privateer has not made him feel overawed by the bigger teams.

"We've constantly been on the leading pace and not really struggled, so I've not felt subdued by the bigger teams," he says. "We've managed to test at certain tracks beforehand, which helped me to get used to them before the race weekend. The set-up of the kart has also been important and having Dean Macdonald as my coach, giving me his experience, has really helped me to progress.

"Dean has raced at most of the tracks before, knows the lines to take and the braking points. After each session, Dean and I will review my data and discuss where I think I should be, and he'll then show me where I can improve."

Confidence will be one of the key elements in steering Shields on an upward trajectory as he takes on some of Europe's best tracks for the first time, against stiff opposition.

The youngster is under no illusions as to the challenge that lies ahead this season: "This year is certainly a learning one for me as I've not raced on any of the European circuits before. My target, though, is that 2019 will be my year."

If that target is met, he will soon join the increasing list of successful British drivers who have tamed the international karting elite. And all on his own terms.