Double amputee Billy Monger says he still plans to drive single-seaters and pursue his "dream" of competing in Formula 1 when he returns to racing.

The teenager had one leg amputated above the knee the other below after hitting a stationary car during a British F4 race at Donington Park in April last year.

He drove a car again for the first time since that crash less than three months later and has also completed extensive simulator test running to prepare for a comeback.

Speaking on stage at Autosport International, Monger said he still has ambitions to return to single-seaters.

With support from the Motor Sports Association, Monger managed to successfully have an FIA rule changed that had previously prevented disabled drivers from competing in international single-seater categories.

"When I was eight years old, I watched F1. That was what I saw, I looked at those guys as being the best drivers in the world," said Monger, who is performing a series of stunts in the Live Action Arena at Autosport International this weekend with Mission Motorsport.

"Don't get me wrong, I went to Le Mans earlier this year and I loved every minute of it, but I just feel like it's deep in the back of my mind the dream has always been F1 since I was eight years old watching it on TV and cheering on people like Lewis Hamilton and Jenson Button.

"To have the passion to keep going with single-seaters is where I think I'll thrive and be at my best and then I'd love to have the opportunity to do Le Mans like that in the future. That would be awesome."

Hamilton 'everything I'd want my hero to be' 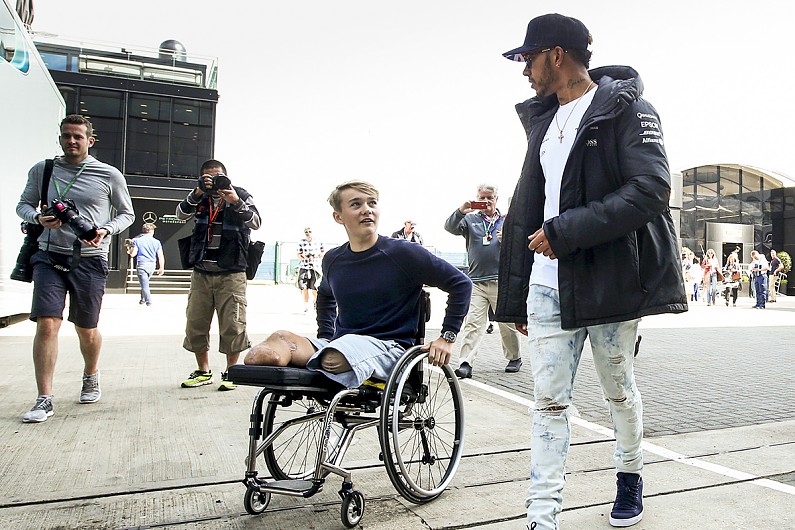 Monger, who was a guest of Hamilton's at the British Grand Prix last year, added the four-time F1 world champion was subject to unnecessary criticism from areas of the press.

"I feel he gets a bit of bad credit in the media," added Monger.

"The time I spent with him up at the British Grand Prix, he was everything that I'd want my hero to be.

"He treated me with respect, he was appreciative of what I was going through and he was just there to let me have a good time.

"For me, watching him since I was eight years old, I couldn't have thought of a better way to spend the British Grand Prix with better company.

"I'm ever grateful, and he still keeps in contact with me now to see how I'm getting on and what my plans are.

"He's been amazing; he does get a lot of stick in the media but I have nothing but good things to say about him."