Kevin Harvick took his first win of the 2017 NASCAR Cup season and his first for Ford, beating Stewart-Haas team-mate Clint Bowyer at Sonoma

Harvick managed to make his fuel last until the end of the final 60-lap stage to claim his first win at the Californian track and his first on a road course at Cup level for 11 years.

He began the final stage of the race in 10th place and worked his way through the field, taking the lead on lap 64 of the 110.

He would surrender that position two laps later to make his only green flag pitstop of the race, but he emerged in fourth with the top three yet to pit.

With five laps left, Bowyer passed Denny Hamlin for second place after fighting his way through the pack with battered car, making it a Stewart-Haas one two.

Despite Harvick slowing the save fuel at the front, Bowyer was unable to make up the nine second deficit, eventually finishing eight seconds behind his team-mate.

Keselowski finished in third to make it an all-Ford top three. The Penske driver gambled on his strategy in the hope of a late caution that would give him a free pit stop.

But the only late caution would come once the leaders had begun the final lap, with Kasey Kahne hitting the concrete barrier at Turn 1 hard.

Hamlin, who led 11 laps, finished fourth ahead of Kyle Busch and Dale Earnhardt Jr, his second best result at the track in what is likely to be his final Cup race there. 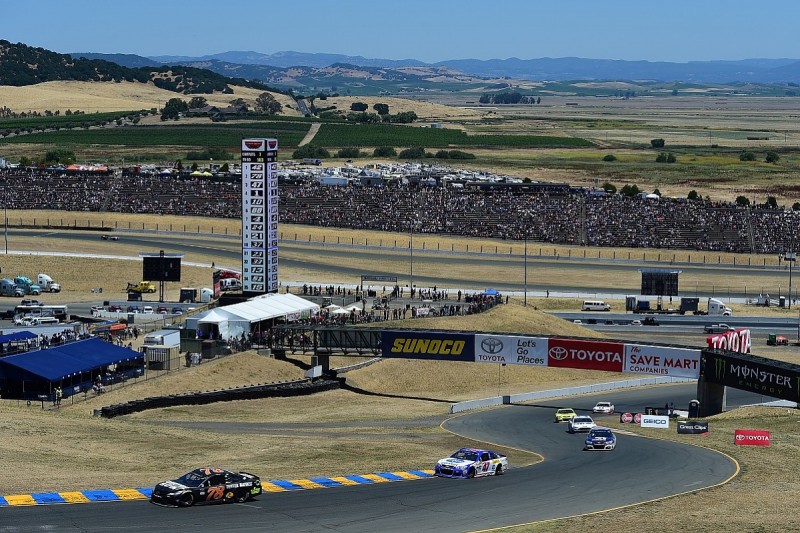 The first stage of the race was won by Martin Truex Jr, who beat road course specialist AJ Allmendinger and polesitter Kyle Larson.

Truex's chances of winning then disappeared with engine problems, and despite leading the most laps in the race, he retired in the closing stages.

Stage two winner Jimmie Johnson finished in 13th, having fallen to 22nd when he pitted before stage three. He was one spot behind Joey Logano, whose chances of victory were ended when he was handed a penalty for speeding on pit road during his final stop.

Points leader Larson also had trouble in the race. Although he led nine laps, he was collected by a spinning Earnhardt 13 laps in and ended up 26th at the flag.

Danica Patrick was also involved in that early incident, as well as a later collision with Ricky Stenhouse Jr. She finished in 17th after spending some time running in the top 10.

One week after competing in the Le Mans 24 Hours for Ford, Billy Johnson, who was subbing for the injured Aric Almirola, finished his Cup debut in 22nd place.