The Stewart-Haas driver held off strong competition to lead 74 laps of 267, take the win and join Jimmie Johnson in having a guaranteed place in the next round.

Carl Edwards, Joey Logano, Johnson and last year's Kansas winner Kyle Busch kept up the pressure on Harvick going into the final laps but couldn't unseat him, ending up completing the top five.

While those results kept Edwards and Busch in strong positions, Logano is still on the cusp of elimination in eighth heading to Talladega next week following his problems at Charlotte.

Also in trouble is Chase Elliott, who lost out significantly when bodywork began rubbing on a tyre after a pitstop. He dived straight back in but the problem persisted, leaving him 31st in the race and bottom of the Chase grid. 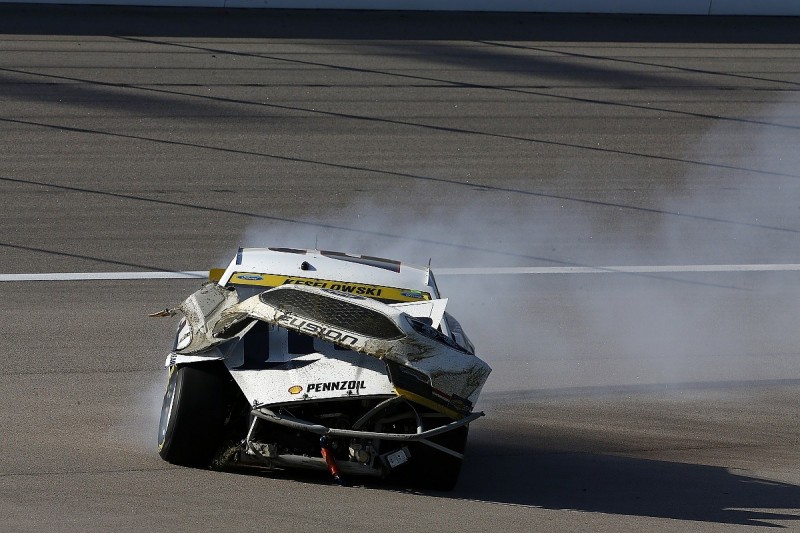 Austin Dillon, Denny Hamlin and Brad Keselowski are also at risk going into the elimination race.

Keselowski, who went to Kansas fourth in the points, had been looking competitive until contact with Hamlin sent him off the track and into the garage with 77 laps left.

He rejoined the race after repairs, but headed straight back in to retire after smoke came pouring from the back of his Penske Ford. He'll go into next week's race 11th in the Chase and looking for a win to save his title hopes.

Polesitter Matt Kenseth started well - leading for 116 laps - but lost ground during a round of pitstops. Handling problems prevented a return to the front and he finished ninth, which kept him second behind Johnson in the Chase points.

Martin Truex Jr had another tough race, a refuelling problem leaving his Furniture Row Chevrolet constantly short on fuel and only able to finish 11th.