Starting 18th on the grid, Busch picked his way up into the top 10 and took the lead for the first time just half-a-dozen laps before the end of the first stage.

From that point on, the race became a battle between Busch's Joe Gibbs Racing Toyota and Jones's Furniture Row Toyota as the pair traded top spot throughout the 500-lap event.

Polesitter Jones looked like he was going to claim his maiden Cup Series victory but after the final caution period on lap 421 - to clear up debris from a crash for Landon Cassill - he didn't have the pace to match Busch. 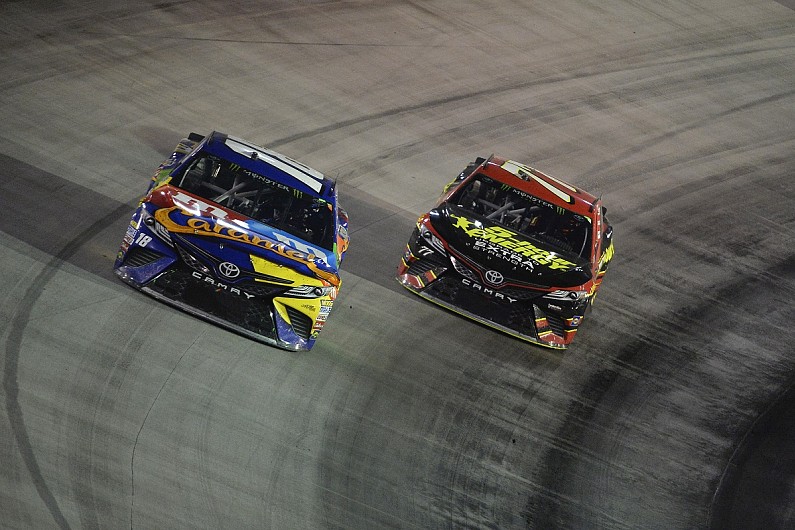 Busch swept round the outside with 55 laps to go and held off a brief charge from Matt Kenseth, who took stage two victory, to claim a third victory of the weekend having already taken wins in the Trucks and the second-tier Xfinity Series.

Denny Hamlin claimed third place on lap 480 after running consistently in the top 10, making the most of Kenseth wearing out the front tyres on his Toyota and dropping back to fourth.

Behind Kenseth was Kurt Busch, the Stewart-Haas Ford driver surviving an early collision with the wall to recover to another top five finish.

Sixth place went to Ryan Newman in the highest finishing Chevrolet, a consistent race ending with him claiming the position from Trevor Bayne with less than a dozen laps remaining.

Jimmie Johnson, who won the rain-delayed April race at Bristol, could only finish 11th after struggling for pace following the final caution period.

It was also a poor race for points leader Martin Truex Jr, who was penalised for a pitstop infringement that relegated him down to 21st.