What are the chances of Fernando Alonso claiming a fourth successive win at the upcoming Spanish Grand Prix? What is the record gap between first and second podium finishes? What milestones were set in Barcelona 13 years ago, and what happened 26 years ago this week? Marcel Schot brings the answers and more anecdotes on the fifth round of the season

With Alonso's third consecutive win now in the books, the Spaniard has become the first driver other than Michael Schumacher to achieve this since Damon Hill won the opening three races in 1996. Likewise, Renault's four consecutive wins is the first such run by any team bar Ferrari since Williams won five in a row twice in 1996. In his first season at Ferrari Schumacher found himself with ten points after four races. Sounds familiar, doesn't it?

Speaking of times long ago, should Jenson Button eventually be disqualified from the San Marino Grand Prix, this will give Alexander Wurz his second career podium, after having scored the first at Silverstone back in 1997. This would quite easily be the largest gap between the first and second podium finish in history. Currently Jackie Oliver holds that record, with a little over four years and ten months between his podium finished in Mexico 1968 and Canada 1973, while it's exactly five years if we include Jim Rathmann's Indianapolis 500 efforts of 1952 and 1957.

Looking forward to Spain, there's more than a bit of hope for Schumacher to continue the upward trend he started in Imola. The German has won the last four races in Barcelona, and with six wins is one of only three winners there in the past decade, Mika Hakkinen and Jacques Villeneuve being the other two.

In 1992 Barcelona gave Michael Schumacher a milestone of very different proportions: 13 years ago it was the venue where the German scored his first front row start. In the same weekend Briton Nigel Mansell scored a milestone of his own, with his 25th win.

By the time Schumacher and Mansell hit the track, the weekend was already over for one team: in pre-qualifying both Andrea Moda cars were left stranded. Rookie Perry McCarthy barely reached the end of the pitlane, while his teammate Roberto Moreno managed a complete lap but at a pace over ten seconds slower than his four fellow pre-qualifiers.

When qualifying commenced in the afternoon, it was the Nigel Mansell show as usual. The Williams driver put in a time a full second faster than anyone else. However, behind him it was not the usual suspects of McLaren qualifying ace Ayrton Senna and Mansell's teammate Riccardo Patrese - the two had to settle for third and fourth as Benetton's Michael Schumacher claimed provisional second, just 0.014 ahead of Senna. However, in the process the German managed to write off one of the new Benetton B192's when he went off the track and straight into the barrier.

On Saturday it soon appeared that everyone's Friday effort would stand as rain came down from the heavens. Fastest in the rain was Ferrari driver Jean Alesi but, with a time some 25 seconds slower than the day before, the Frenchman was still stuck eighth on the grid. Schumacher didn't even bother to go out in the rain, and thus took his first front row position from a dry garage. 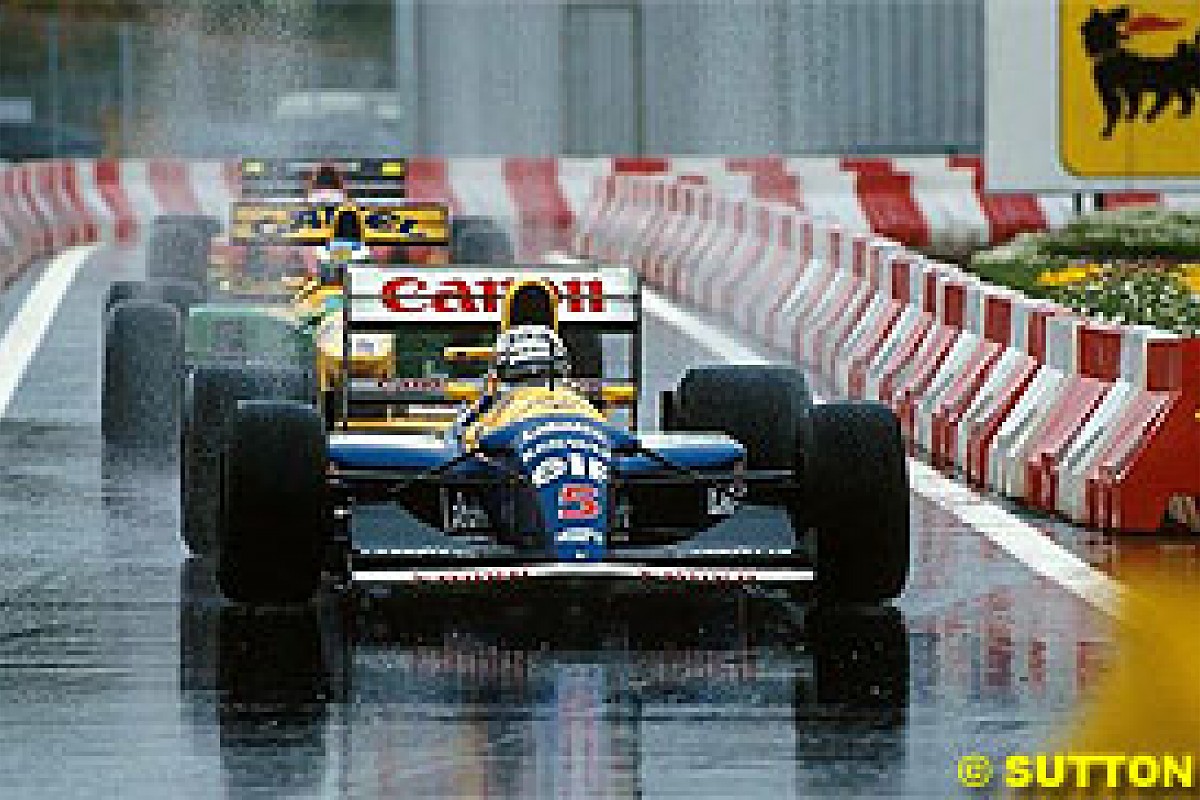 On Sunday the weather seemed indecisive. The warm up was wet but soon after the rain stopped, only to start again 45 minutes before the race, leaving everyone wondering what tyres should be used. A few minutes before the race it was officially announced as a wet race. At the start Mansell was about the only one maintaining his position; behind him Patrese moved up into second, while Alesi surprised Schumacher and Senna and claimed third after a suspicious looking start. In the opening laps the Williams' exchanged fastest laps and ran away from the rest of the field at a rate of two seconds per lap. Everything looked ready for a fourth one-two for the Grove team.

Meanwhile both Schumacher and Senna had found a way past Alesi. A few laps later McLaren driver Gerhard Berger did the same, forcing Alesi into a spin that also brought the Frenchman's teammate Ivan Capelli past him. After that nothing changed for several laps as everyone seems predominantly busy keeping their cars on the slippery asphalt. On the 21st lap Williams one-two hopes came to an abrupt end as Patrese skidded off the track and into retirement.

Behind the leaders Michael Schumacher showed to be quite a sensation in the rain. Not only did the German shake off renowned rain specialist Ayrton Senna, he was also taking large chunks out of Mansell's 23 second lead. Between laps 18 and 24, with the rain at its heaviest, the German took no less than 15 seconds off Mansell's lead. Later the Briton claimed to have fallen more or less asleep, a theory supported by him just as rapidly increasing his lead back to twenty seconds again.

Far behind Jean Alesi was another rain sensation. Despite a pitstop and another spin, the Ferrari driver secured third place when Ayrton Senna aquaplaned off a few laps from the end. The Frenchman pushed for all he was worth to catch Schumacher for second place. Even when Schumacher took it easy in order to not risk going off, the full minute Alesi gained in the final 13 laps was more than impressive.

For Mansell his fourth win of the season arrived without any trouble at all. His 25th win put him on par with Jim Clark and Niki Lauda in fourth place on the all time list behind Alain Prost(44), Ayrton Senna (33) and Jackie Stewart (27).

26 years ago it was the weekend of the Belgian Grand Prix. With five rounds gone in the championship, everything was still very much open. With three different and inconsistently performing race winners, as well as two steady point scorers, the first five in the championship were covered by a mere four points. Ferrari's Gilles Villeneuve and Ligier driver Patrick Depailler were leading with twenty points each, followed by Depailler's team Jacques Laffite and Lotus' Carlos Reutemann with 18 each. In fifth was Villeneuve's teammate Jody Scheckter with 16. 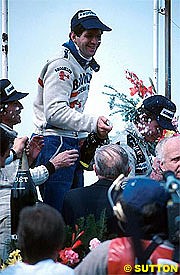 With that battle raging, the circus went to Zolder for the Belgian Grand Prix. In first qualifying Villeneuve was the big man. On a drying track, the Canadian clocked a time nearly four tenths quicker than number two, Jean Pierre Jabouille in the Renault. Fellow championship contender Laffite found himself in third, ahead of Williams veteran Clay Regazzoni and World Champion Mario Andretti in the Lotus. Scheckter was a disappointing sixth, but still a long way ahead of the other championship contenders. Reutemann found himself in twelfth, and Depailler was in an almost depressing 17th.

On Saturday the track was fully dry, much to the delight of both Depailler and his team. Laffite grabbed the pole, with Depailler second. Behind them the field looked rather different than it did the day before; Nelson Piquet in the Brabham qualified third, ahead of Alan Jones in the Williams. On the third row it was Andretti and Villeneuve, and behind them were Scheckter and Regazzoni.

At the start Depailler grabbed the lead with Jones and Piquet behind him, as Laffite came off the grid slowly. Behind them Regazzoni moved past the two Ferraris, something he'd come to regret rather soon. First Scheckter drove into the Swiss driver after an overoptimistic overtaking maneuver and, just as Regazzoni came to a stop, he saw the bottom of Villeneuve's machine flying over his head as the Canadian launches over the Williams' rear wheels. While Regazzoni was out, Villeneuve coasted into the pits, had his nose replaced and resumed the race in last place.

While Scheckter made his way past Andretti in clean fashion, his next overtaking maneuver was again of the bumper car variety as he pushed Piquet off the track. At the front it was soon both Ligier drivers battling it out for the lead. However, they asked a lot of their tyres and after 25 laps Alan Jones easily took the lead. The Australian quickly struck a gap of over ten seconds, but then his power cut out all of a sudden and Depailler once again found himself in the lead.

For the Frenchman it was only to last for seven laps: with worn tyres to blame, the Ligier driver went off hard when his Goodyears refused to respond, prompting new leader Laffite to take care of his tires. The downside was that Jody Schecker's Michelin shod Ferrari didn't have any such problems, and the South African sailed past the Ligier with no trouble at all with 16 laps to go.

Far behind them Tyrrell driver Didier Pironi drove a good race in third, but much to everyone's surprise found the hard charging Villeneuve under his gearbox, aiming to score a podium. The Tyrrell driver in the end was unable to hold back the Ferrari any longer, and watched the red vehicle disappear into the distance.

However, on the final lap Pironi saw the red dot growing quickly again - Villeneuve's march was halted a few hundred meters from the finish as he ran out of fuel. Meanwhile Scheckter finally scored his first victory for Ferrari, which brought him the lead in the championship, shared with Laffite.