Why wasn't it surprising the Nick Heidfeld didn't win from pole at Nurburgring? What milestones were set in Montreal 16 years ago, and what happened 29 years ago this week? Marcel Schot brings the answers and more anecdotes on the eighth round of the season

Nick Heidfeld's pole position at the Nurburgring makes him the twelfth driver on the grid with one or more pole positions. That's the highest number since the end of 1986, when the retirements of Alan Jones, Patrick Tambay and Keke Rosberg meant going from twelve to nine. That Heidfeld didn't convert his maiden pole into a win is hardly surprising. Of the current field only Michael Schumacher and Jarno Trulli have went on to win the first race they started from pole.

For Ferrari there doesn't seem to come an end to the misery. The team's now win-less for eight races, their longest drought since Michael Schumacher's first win for the team in the Spanish Grand Prix of 1996. McLaren are a completely different story at the moment. While Kimi Raikkonen lost his win right at the end of the European Grand Prix, Juan Pablo Montoya finished in the points to make it twelve consecutive races with points for the Woking team.

Another driver on the wrong side of the results is Mark Webber. The Australian saw his string of point finishes end in the first corner of the race when he drove into Montoya's McLaren in the melee. For Webber this was something very unwelcome in times when criticism on his racing ability seems to grow every weekend.

While Webber is beating his teammate on a regular basis in qualifying and running ahead of him most of the time on Sunday, so far Nick Heidfeld has collected three podium finishes this year against Webber's one. It's hard to say whether it's luck, karma, attitude or mentality, but in the end the results count and for Webber it's about time he turns them in his favour.

In 1989 Montreal was the scene of Thierry Boutsen's first victory. After four years with Arrows and two with Benetton, the Belgian had made the step to Williams to replace Ferrari bound Nigel Mansell. The start of the season was difficult for Boutsen. The reliability wasn't exactly top notch, so while qualifying was usually fine, the car rarely lasted the race in good enough condition to score. However, in the previous two rounds, Boutsen's teammate Riccardo Patrese had shown there was some potential by scoring two consecutive second places. Thus the circus arrived at the Ille de Notre Dame with McLaren drivers Alain Prost and Ayrton Senna firmly in the lead of the Championship with respectively 29 and 27 points, while Patrese was third with 12. Boutsen, meanwhile, was down in eleventh with only four points.

On Friday it was business as usual for the McLarens. The white and red cars were eight tenths clear of Patrese in the Williams, with Alain Prost setting the provisional pole time. Behind Patrese there were the two Ferraris of Gerhard Berger and Nigel Mansell with Thierry Boutsen nearby in sixth place. Surprising number seven was Stefano Modena, the Brabham driver who had to pre-qualify in the morning.

The next day conditions weren't quite as good as on Friday and thus, with the exception of the very back of the grid, where Coloni's Roberto Moreno made Lotus' Satoru Nakajima a non-qualifier, nothing changed.

On Sunday morning the drivers were welcomed to the circuit by dark clouds emitting large quantities of rain. The warm-up saw Nigel Mansell on top of the timesheets, but only barely ahead of Thierry Boutsen. The Belgian was overjoyed with his normally troublesome Williams as it appeared to work a lot better in the wet. When the race started at midday the rain had stopped, but the track was still very damp. Two attempts were required to get underway, as Gerhard Berger's Ferrari stalled right before the first start. At the end of the extra warm-up lap, Nigel Mansell, Benetton driver Alessandro Nannini and Minardi's Luis Perez-Sala took the gamble to head into the pits and change onto slicks.

After that a bit of a curious situation occurred as Mansell and Nannini exited the pitlane, believing to be behind the pack. In actual fact, the others were still standing on the grid awaiting the start of the race. Both were disqualified without mercy. When the actual race got underway, it happened in starting order. Prost took the lead ahead of Senna, Patrese, Berger and Boutsen. Behind the Belgian Stefano Modena spun off the track, taking out Minardi driver Pierluigi Martini in the process.

After the first lap it was already apparent that in these tricky conditions the battle was between McLaren, Ferrari and Williams as the first other car, Andrea de Cesaris in the Dallara, was already eight seconds behind the leader and 4.5 behind Boutsen. After two laps Prost went into the pits. The Frenchman had his tyres checked after complaining about a possible slow puncture. Nothing was found, but the real problem became painfully apparent in the very next lap. A suspension failure at high speed brought the McLaren driver's race to an early end. Meanwhile, Boutsen's race was going well. The conditions suited him and before the end of lap two he overtook Gerhard Berger. With Prost's retirement, that brought the Williams driver up into third place.

Far behind the leaders, it was Onyx driver Stefan Johansson who became the third disqualified driver of the afternoon. Unknowingly the Swede had left the pits a bit too hastily and was circling the track with a collection of pit equipment still attached to the rear of his car. After repeatedly ignoring signs to stop to have the extra items removed - apparently it didn't make much difference on the handling of the Onyx - the spectacle ended with a black flag. 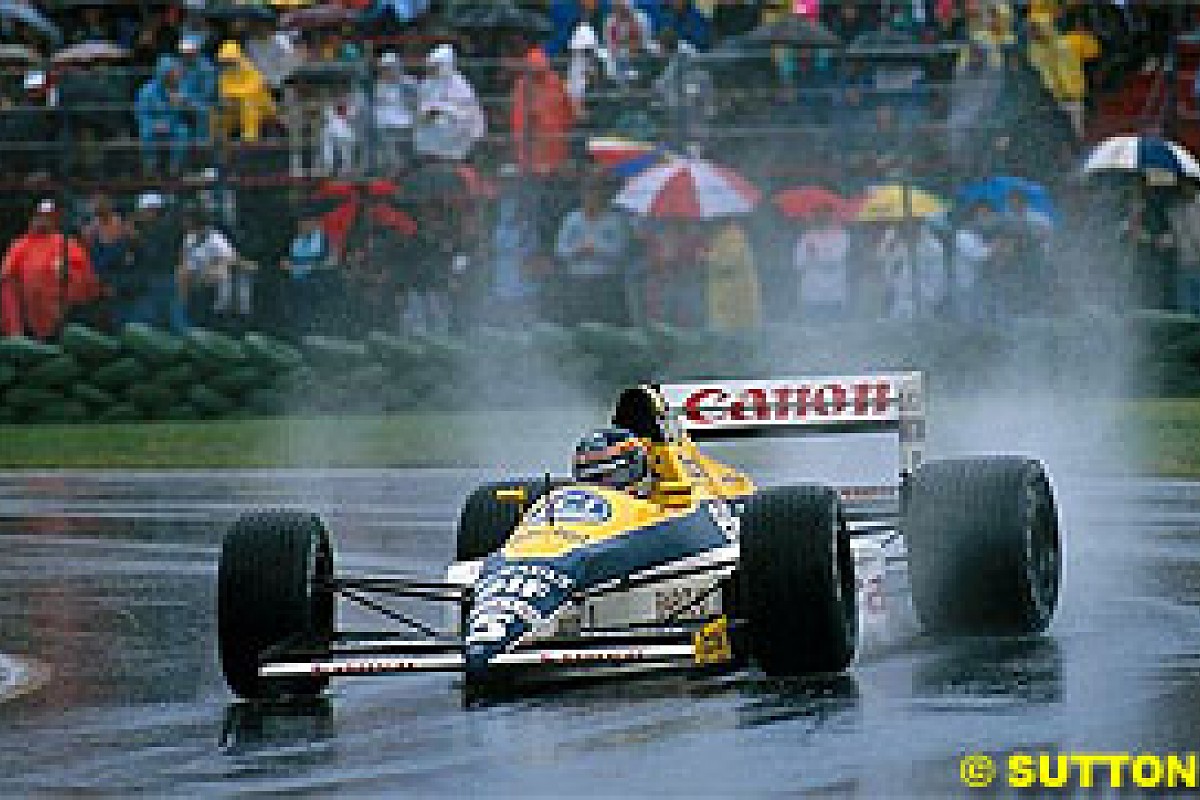 In the meantime short bursts of rain kept the drivers on their toes. Senna was the first to dare to switch to slicks after four laps, followed by Boutsen after eleven. This gave Patrese the lead, while Berger retired. While Boutsen pitted and dropped outside the top ten, Senna was already back in second and gaining four seconds per lap until the rain intensified again.

After 18 laps Boutsen pitted again to go back to wets, two laps later followed by Senna. For the two the gamble had proven to be a wrong choice. Senna returned in sixth, 48 seconds behind Patrese, while Boutsen was eleventh and well over a minute behind his teammate. However, having fresh wets helped both drivers as the rest of the field eventually had to pit for their second set. Senna soon found himself in fourth, behind Patrese, Arrows driver Derek Warwick and Osella's Nicola Larini, and followed by Boutsen.

31 laps into the race, Senna flew past Larini into third, while Boutsen didn't even have to pass the Italian as the Osella stopped with an electronics failure. At the same time Patrese pitted, leaving Warwick in the lead. At the halfway point the Briton was ten seconds ahead of Senna, with Patrese in third and Boutsen in fourth, 50 seconds behind. Warwick maintained his lead until lap 38 after which he became the second driver of the afternoon who retired shortly after having been passed by Senna. By then the race looked done. Senna was leading Patrese by 26 seconds, with Boutsen in third a similar distance behind Patrese and with another similar gap to number four, Andrea de Cesaris.

However, things took a turn when Senna's tyres started to come apart and Patrese suffered problems with the bottom of his car. Boutsen gained on both of them with leaps and bounds. With seven laps to go, the Belgian had caught up with his teammate and appeared satisfied with second place, some twenty seconds behind Senna. With three laps to go, Boutsen spotted Senna's car parked on the side of the track, barely realising this put him in the lead of the race and on his way to his maiden victory. Behind him, Patrese was limping home in second. Behind the two Williams both Andrea de Cesaris and Lotus driver Nelson Piquet were nearly a lap behind, making it a one-two for Williams as Boutsen scored his maiden victory in his 95th race.

This week 29 years ago Formula One arrived in Sweden for round seven of the 1976 Championship. After having scored four wins and two second places in the first six rounds, Ferrari driver Niki Lauda was already miles ahead of the competition. Behind the Austrian, his teammate Clay Regazzoni and McLaren's James Hunt were tied for second with 15 points each. Both Tyrrell drivers Jody Scheckter and Patrick Depailler followed them with 14 after having come second and third in the previous race in Monaco.

First qualifying started with the Tyrrell's in good shape. Depailler posted the fastest time, two tenths ahead of Lotus driver Mario Andretti, who had returned after having missed the Monaco Grand Prix due to Indianapolis 500 commitments. Scheckter was third fastest, followed by Championship leader Lauda and Chris Amon in the Ensign. Local favourite Ronnie Peterson came sixth in his March.

In the second session things went a fair bit quicker for Lauda and Andretti, who claimed respectively first and second fastest. Amon and Scheckter also improved, but not quite enough to beat Depailler's time from the first session. However, the third and final sessions proved all deciding with many drivers dipping into the 1:26s. One driver went into the 1:25s and that was Jody Scheckter, who claimed the first pole of his Formula One career. Next to the South African on the front row was Mario Andretti, ahead of the surprisingly fast Chris Amon. After having been fastest through the first two sessions, fourth place for Depailler came as a disappointment. World Champion Niki Lauda and the fastest Swede Gunnar Nilsson (Lotus) completed the third row, with Hunt and Regazzoni pretty much out of the picture in eight and eleventh respectively. 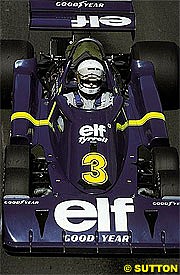 When the race got underway at Anderstorp on Sunday, it was Andretti who had the better start than Scheckter, grabbing the lead ahead of the Tyrrell driver. Behind them most of the left side of the grid got away quicker, with Depailler getting ahead of Amon and Nilsson demoting Lauda to sixth.

A few laps in Lotus' fortunes changed. After having both drivers move up at the start, Nilsson permanently disappeared from the stage after three laps when he spun into the pitwall. Andretti kept the lead, but the stewards had decided he gained it in the first place by jumping the start. The American was penalised a full minute, which would be added to his race time at the end. This had Andretti pushing hard in order to gain more than a minute on Scheckter.

Nothing much happened throughout the race until Chris Amon crashed out with a suspension failure after 38 laps. However, the big turning point came seven laps later when Andretti's engine decided it had had enough of the pushing and refused further service. Scheckter inherited the lead and with teammate Patrick Depailler behind him making sure Lauda didn't get too close, there was nothing left to fear for the South African.

The only driver to really enjoy himself was Clay Regazzoni. After a mediocre eleventh starting position, the Swiss was actually the only driver to gain places for another reason than people retiring ahead of him. On lap 54 he made his way past Carlos Pace in the only Brabham left on the track folllowing Carlos Reutemann's retirement after only two laps. Four laps from the end Regazzoni found his race rewarded with a point when he passed Ronnie Peterson for sixth.

A minute ahead of the Ferrari, Scheckter had brought home victory on the track that had given him his first victory two years earlier. It would be the one and only victory for the six wheeled Tyrrell P34.