The long wait is over and the Australian Grand Prix will kick off the 2005 season next Sunday. Marcel Schot looks at the milestones, statistics and anecdotes ahead of the first round of the Championship

The 2005 season is finally here and with so many changes in the field the anticipation is probably even more than in recent years. We start this year with four rookies, one more than last year. What is different to recent years is that two teams have opted for a line-up without any Grand Prix experience. Jordan will start with Narain Karthikeyan and Tiago Monteiro, while Minardi starts with Christijan Albers and Patrick Friesacher.

The last team to start the season with zero Grands Prix experience for their drivers was Coloni back in 1991, which was a one-car operation with Pedro Chaves not getting through pre-qualifying a single time. The last time a team actually fielded two rookies was way back in 1984, when Tyrrell started with Martin Brundle and Stefan Bellof. The fact that Jordan and Minardi are doing something that hasn't been seen in the last 20 years should make it clear that both teams are taking quite a risk this season.

While everyone anticipates how the teams have come out of the winter, one has to ask what the actual relevance of the opening round is. Looking at the drivers who were within a somewhat reasonable range of the Championship leader halfway through the season and how they did in the opening round, you have to say the opening round is very relevant. In only two of the last ten years the first race of the season was won by a driver that wasn't a contender by mid-season.

In 1997 David Coulthard won the Australian Grand Prix and scored only four more points in the first half of the season, ending up third after Michael Schumacher had been taken out of the results after his Jerez crash with Jacques Villeneuve. In 2003 it was again David Coulthard who won the opening round. This time around the Scot was more successful in the first half of the season but with a total of 25 still 13 short of 70% of Michael Schumacher's total halfway through. This time Coulthard didn't get further than seventh in the final standings.

That only two or three drivers usually make it within reach of the Championship leader halfway through the season also makes clear what tough task lies ahead for Jenson Button, who allegedly needs at least 70% of the leaders points tally to be eligible for a move to Williams in 2006. Last year the Briton was obviously well out of reach, with leader Schumacher winning eight of the first nine races. However, a similar domination for Schumacher doesn't lie within the realms of expectation this year if the pre-season is anything to go by. Of course, Australia will tell whether things have really changed or whether Ferrari will continue what they've been doing in recent years.

For Eddie Irvine Melbourne presented a major milestone in his Formula One career. After having made his debut with Jordan in 1993, the Ulsterman moved to the once might Ferrari team together with Michael Schumacher in 1996. However, it wasn't until the opening round of 1999 in Melbourne that Irvine achieved what every driver hoped to achieve. That weekend he scored his first win. 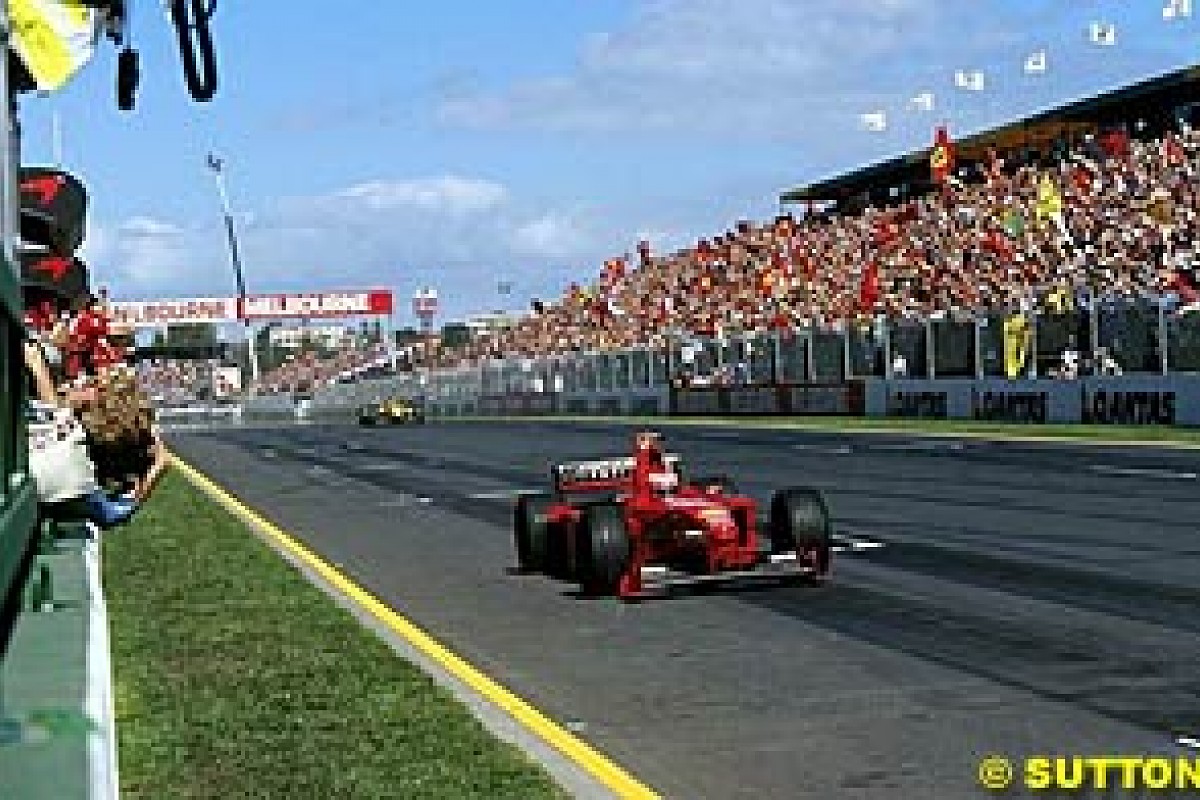 The weekend didn't start out too brilliantly on Friday. Even though the team were running heavy fuel loads, 14th place wasn't exactly the first thing that came to mind when hearing the name Ferrari. Free practice on Saturday went a bit better, but with a tenth fastest time for Irvine there was most definitely reason for concern. When qualifying ended with the McLarens far ahead of the field and Eddie Irvine in sixth, things looked like they would be 1998 all over again.

Before the race got underway, Irvine moved up two spots already. At first both Stewarts developed a problem before the formation lap, taking Rubens Barrichello away from fourth on the grid and into the pitlane. On the second attempt Irvine's teammate Michael Schumacher couldn't get the Ferrari in first and was forced to give up his third position and start from the back. At the start Irvine then got away ahead of Jordan's Heinz-Harald Frentzen to claim third behind the two McLarens.

The difference between the silver cars and the red one following them was painfully clear. Upon completion of the first lap, Irvine was already three seconds down on leader Mika Hakkinen. On the other hand, Frentzen behind him was nearly a second away, so all in all it wasn't too bad. However, while the McLarens disappeared rapidly, the Jordan stayed relatively close and thus after ten laps Irvine was nearly 18 seconds behind the leader with Frentzen less than two second behind him and Williams driver Ralf Schumacher two seconds behind the Jordan.

A few laps later Irvine was able to consolidate his position for the first time and in lap 14 gained second place as David Coulthard disappeared from the track with a hydraulic problem. Leader Hakkinen was also having a tough time, but it was the crash of BAR driver Jacques Villeneuve that wiped away the Finn's lead at once as the safety car had to come out on the track. As the safety car disappeared again, Hakkinen couldn't accelerate at all and Irvine could only just pass the line behind the McLaren before taking the lead. Another safety car situation kept the cars close, but even though the time difference with Frentzen was never big, Irvine controlled the race and comfortably brought the car home for his maiden victory.

In 1979 the Grand Prix calendar looked quite a bit different than in 2005. On 3 March it was already time for the third round of the championship. After having won both the Brazilian and Argentinean Grands Prix, Jacques Laffite was the surprise championship leader in his Ligier, followed by Lotus driver Carlos Reutemann. However, the third round in South Africa brought the much anticipated Ferrari 312T4 into play. While the Maranello team had been forced into playing a minor part in the opening races, the new car proved quick right away. 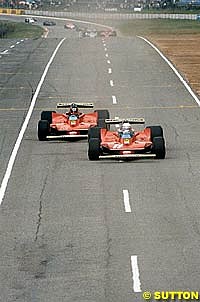 The grid looked nothing like the World Championship standings as Renault driver Jean-Pierre Jabouille was on pole, ahead of the Ferraris of Jody Scheckter and Gilles Villeneuve. Niki Lauda in the Brabham was fourth and only then the two Ligiers appeared, Patrick Depailler ahead of Laffite. At the start of the race the Ferraris both beat Jabouille, but before the first lap was over the Frenchman was back in the lead. Unfortunately for him, the clouds erupted in a heavy rain shower after only three laps, causing the race to be stopped. During the intermission most drivers switched to wets, but Scheckter took the gamble and stayed on slicks.

When the race was resumed, Villeneuve took the lead immediately, followed by Scheckter and Jabouille. Daredevil Villeneuve set the pace and rapidly started to move away from Scheckter until the hot sun came out only a few laps later. By lap nine drivers on wets started to pit to change back to slicks, but Villeneuve kept going in the knowledge that he had to build a healthy lead over Scheckter in order to keep the lead. After 15 laps the Canadian finally came into the pits with a 15 second lead. However, this was still not enough and Scheckter grabbed the lead with his teammate behind him and the rest of the field some distance behind the two.

Scheckter kept his lead until his own pitstop for fresh tyres after 53 of the 78 laps, after which Villeneuve resumed the lead again. Towards the end of the race Scheckter came closer and closer on his less worn rubber. The crowd was cheering in anticipation of a win by their local hero Scheckter, but it wasn't to be. As the chequered flag was waved, Villeneuve was a mere four tenths ahead of his teammate, with Tyrrell driver Jean-Pierre Jarier a distant third.