Yamaha MotoGP team getting worse in the wet - Maverick Vinales

Yamaha has failed to get on top of its wet-weather issues and has got worse in such conditions as the 2017 MotoGP season has progressed, according to Maverick Vinales

Both of Motegi's Friday practice sessions were affected by rain, with Marc Marquez leading the morning's opening session for Honda before Andrea Dovizioso's Ducati took the top spot in practice two.

Vinales and team-mate Valentino Rossi both finished the afternoon session outside the top 10, in 11th and 12th places respectively, and both complained of a lack of rear traction in the tricky conditions.

Having already warned Yamaha its poor wet form could cost it the title, Vinales said his team was going backwards in the rain.

"It's true that in the wet we have not improved," said Vinales.

"In fact, we have got worse during the year.

"In Assen the bike wasn't so bad in the wet.

"The problem is at the rear, we don't have traction when we open the gas. 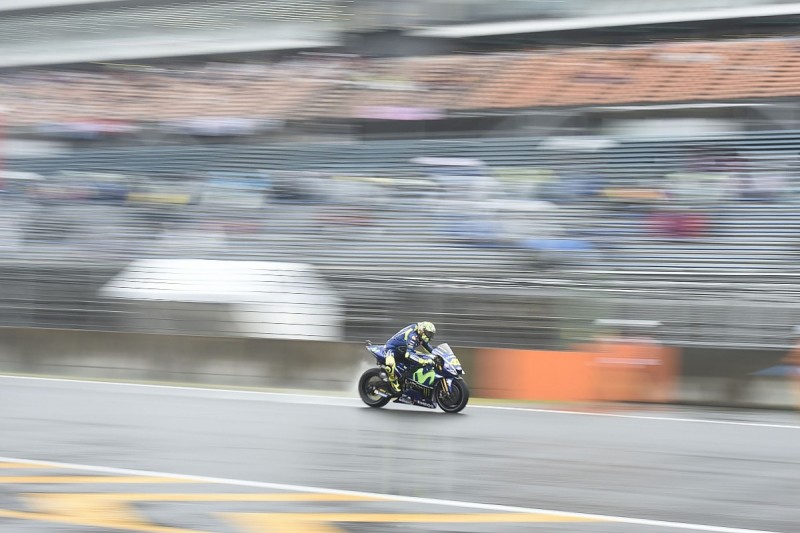 Rossi agreed that he and Vinales were having identical difficulties.

"We tried a lot of things with the bike, but we are in trouble and we don't understand why," he said.

"Last year I was very competitive in the wet, I had a good feeling with the bike, but this year we are struggling. Something strange.

"We try to modify it, but in the end we are quite far from the top.

The bike is difficult to ride, and in general the problem is a bit like in the dry - we don't have rear grip."

Rossi and Vinales both finished well adrift of Tech3 Yamaha rider Johann Zarco, who was fifth-fastest in second practice aboard the year-old satellite M1.

"If you look at the data of the old bike, it's a big frustration," Rossi said.

"We need to try to understand it, especially for next year.

"We are quite worried because today we did a lot of modifications.

"We don't have a lot to do more than this, this weekend."

Rossi also highlighted the impressive performance of MotoGP rookie Kohta Nozane on the second of the Tech3 bikes as further evidence of the factory team's woes.

"It's interesting to see the two Japanese riders," said Rossi. "Nakasuga is with our bike, Nozane is with the old bike.

"Usually Nakasuga is faster than Nozane and has a lot of experience, but today he is two seconds slower. So it's a big step."