Vinales scored a second-straight pole position at Aragon, but his championship hopes were dented in the race as he finished fourth while Marquez collected his fifth win of the season.

Yamaha rider Vinales is now 28 points behind championship leader Marquez, with a maximum of 100 still available from the remaining four rounds.

"If we want to win, we have to improve the package," said Vinales.

"Every race that passes, our options become more and more limited.

"I woke up thinking about winning [on Sunday], but after giving my 200% you can see that I did not catch them.

"To fight for the championship this way will be very difficult.

"I had no grip in the rear.

"If we can find the traction and we find it now, we can fight. But if not, [it will be] impossible.

"We always give the maximum and more, both me and Yamaha.

"[But] with the package we have now, it's difficult to think that we can recover [almost] 30 points."

Vinales did not use the hard tyre in any sessions before Sunday's race but picked the hard rear compound for the main event, and admitted he had followed the lead of his rivals when making his choice.

"If I practiced on Friday [in the dry] I wouldn't have gone with the hard," added Vinales.

"But our opponents chose the hard tyres, except [Andrea] Dovizioso, who normally uses the soft ones.

"But we didn't know clearly, the laptimes were really slow this morning [in warm-up], so we decided to do it.

"Once it was decided, we did our best because on the first laps I was really slow.

"I was lucky as well I could manage my tyres well until the end, some opponents dropped a lot."

No 'drama' for Dovizioso's title hopes despite dropped points 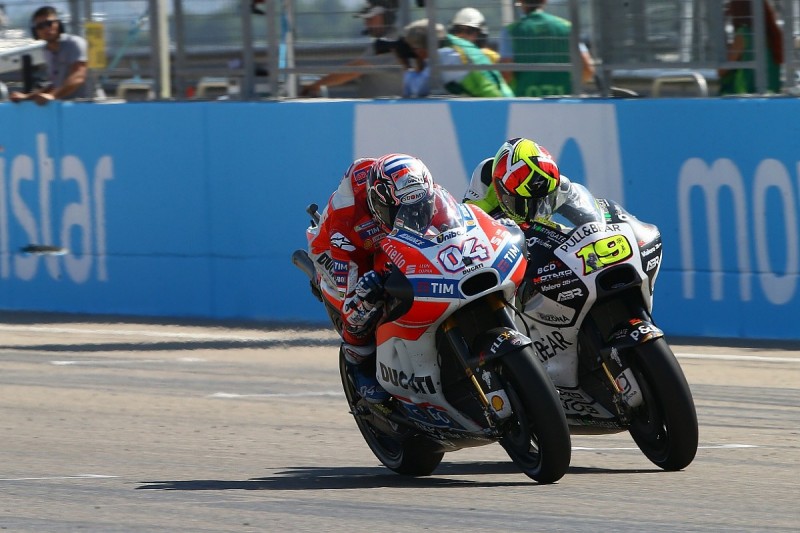 Ducati rider Andrea Dovizioso said overhauling Marquez in the riders' standings had become a more "difficult" task after his seventh place finish, but that the result did not spell the end of his title ambitions.

The Italian started the Aragon weekend level with Marquez, but is now 16 points behind after he slipped down the order in Sunday's race having run as high as third.

"It's not the best, we lose points," said the Italian. "But we know the points we can gain in four races. It's not a drama.

"It will be difficult because Marc is so fast in any conditions in any track. Maverick is [also] really strong.

"But I think we have our chance and for sure we will try until the end.

"The good thing about this championship is in any moment you can change the reality. That is nice. Sometimes it's negative, sometimes it's positive."