It was a Suzuki one-two after the start, with Alex Rins leading his rookie team-mate Joan Mir, but the team's strong run quickly ended when Rins suffered a crash at Turn 9 on the third lap. 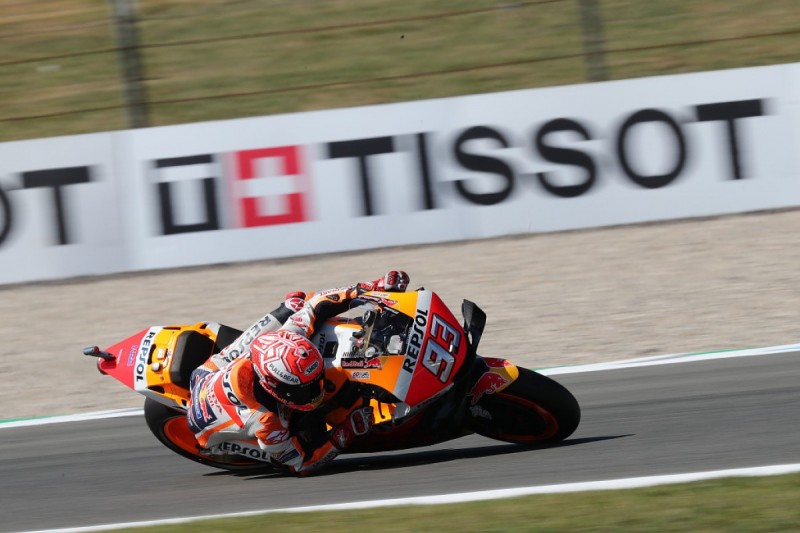 Soon after, Mir made a mistake and Quartararo moved into the lead with Vinales and Honda rider Marquez in the top three.

With Vinales running wide, Marquez was up to second and he put constant pressure on Quartararo.

The Petronas SRT rider was visibly struggling with his Yamaha, his bike shaking several times on the straights, and Marquez was eventually able to move around him at Turn 6.

But Marquez made a mistake at Turn 1 next time around, allowing Quartararo to retake the lead.

Up until that point, Vinales hounded Marquez, and finally found a way through soon after the Honda rider's mistake before the final chicane.

Vinales then took advantage of yet another Quartararo bike shake to take the lead with ease, with the Frenchman also dropping behind Marquez before long, and failed to keep up with the duo in the latter stages.

A second mistake from Vinales allowed Marquez take first place, but his lead was again short-lived as his rival pulled off an impressive move at the fast Turn 13 right-hander.

Vinales then extended his lead to half a second, and opened this up to over a second to force Marquez into surrendering his attack.

Marquez finished second to extend his championship lead to 44 points over Andrea Dovizioso, while
Quartararo in the end dropped 9.7s adrift to secure the final podium spot.

Fourth place was hotly contested between Ducati duo Andrea Dovizioso and Danilo Petrucci as well as Mir, with the former taking the position in the end.

Pol Espargaro was the top KTM in 11th as Johann Zarco, who was running 10th early on, retired in the pits.

MotoGP Assen: Crutchlow worried to be so far behind Quartararo