Vinales was one of the winners in 2016's run of eight different victors in eight races, but his British GP triumph came in cold conditions.

Suzuki cured a lack of rear grip in the rain that weekend, but maintaining rear grip over longer stints in hot conditions remained a work in progress.

The 21-year-old had declared himself "really satisfied" with fifth at Misano, but halving the gap to the winner to 8.238 seconds and taking fourth at Aragon represented another step.

Vinales led the race for seven of the first eight laps, and was then shadowing Yamaha's Jorge Lorenzo - who eventually finished second - until running wide at Turn 12 on lap 18 of the 23.

"I'm really happy because I could do at least 11 laps in the front and battling with them," Vinales said.

"And then I could keep with Jorge until lap 18 and that's great.

"We did a big step, it was quite hot, so it confirms that we did a good job.

"If I could keep the grip for more laps, I can be there, fighting at the front.

"I'm motivated for that, and also it's a little bit of a shame that we didn't get the podium.

"In every race we get experience and we do one step more.

"This time the tyre lived until lap 18. We try next time that it lives until the last lap." 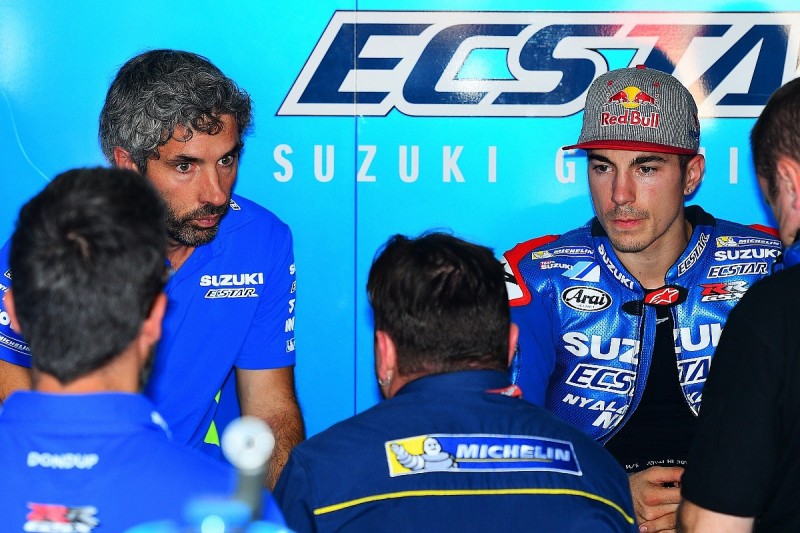 Vinales, whose team-mate Aleix Espargaro finished seventh, said electronics had been and remains the focus as Suzuki looks to conquer warmer conditions.

"We just missed a little bit of the grip on the rear, and then it makes it so difficult to keep the line and then get the good acceleration," he said.

"We are working on the electronics to save the tyres more, and the team's doing a good job, we just need experience."

He added that the issue was definitely "more electronics" than chassis related and was better "where we can use more power".

"Behind Marc [Marquez], behind Jorge, some parts, some laps, they have more power or less power. We need to organise this power," Vinales said.

"When I have grip, the bike is good."