Rossi says Marquez is 'all or nothing' after Argentina MotoGP clash

Marquez crashed out of Sunday's Termas de Rio Hondo race when he made contact with the rear of Rossi's Yamaha on the penultimate lap.

Rossi had overtaken the Honda at the end of the back straight, after an initial exchange of places at Turn 1, with Marquez then clipping him and falling while trying to repass.

"It's a shame that he crashed, but I think he did a mistake," said Rossi.

"Marc is a rider who always bets all in, all or nothing.

"It's a shame because it could've been a good battle to the end.

"He knew that if I overtook him, I was a little bit faster. So he tried everything.

"But maybe a little bit too much, I think."

Marquez said he had 'learned' more from Rossi during their dice.

"It's a shame what happened, because we were having a good race," he said.

"I've always said that he's my idol and my reference, so you always learn things from him." 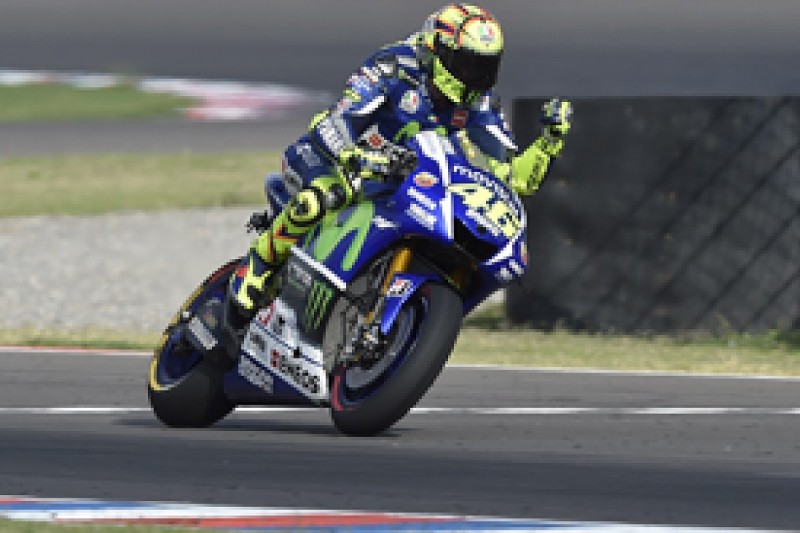 Rossi had come through from eighth on the grid to catch Marquez as the Honda rider's hard tyres faded while Rossi's extra-hards remained competitive.

Marquez explained that his late switch to the softer compound had been made because Yamaha's long-run pace suggested Rossi would be hard to beat on the same tyre.

The Italian said he had tried to ignore his rival's strategy.

"The key was that we didn't care about Marquez, we just concentrated on us," said Rossi.

"We just used the tyre that permitted me to do the race distance in the least time."

Marquez's retirement drops him to fifth in the championship, 30 points behind Rossi - who has now won two of this season's three grands prix.