Rossi: Lorenzo MotoGP Yamaha ride for 2019 season would motivate me

With Lorenzo's time at Ducati increasingly likely to end after this year, and Suzuki looking set to sign Joan Mir to partner Alex Rins, the three-time MotoGP champion's only hope of a competitive ride in 2019 appears to be on a satellite Yamaha.

Despite their tumultuous relationship during their spell as team-mates from 2008-10 and '13-16, Rossi said he would have no objections to Lorenzo returning to the Yamaha fold.

The Italian suggested Lorenzo could fulfil a similar role to current Tech3 rider Johann Zarco on a third factory-spec Yamaha that would help to spur him on.

"After trying to stop Zarco, I will also try to stop Lorenzo," joked Rossi, referring to speculation about the Italian vetoing Zarco getting a factory-spec bike for 2018.

"I was [team-mates] with Jorge for a long time and he is a great rider, he is able to ride the Yamaha very fast.

"It will be hard if Lorenzo comes back, but the situation will be very similar to this year because we have Zarco, who is very strong.

"When you are in Yamaha you have always great team-mates or fast riders with the same bike.

"In one point of view it's more difficult, but it's also good because you have better motivation and you can also see the way other riders ride the bike and try to learn and improve." 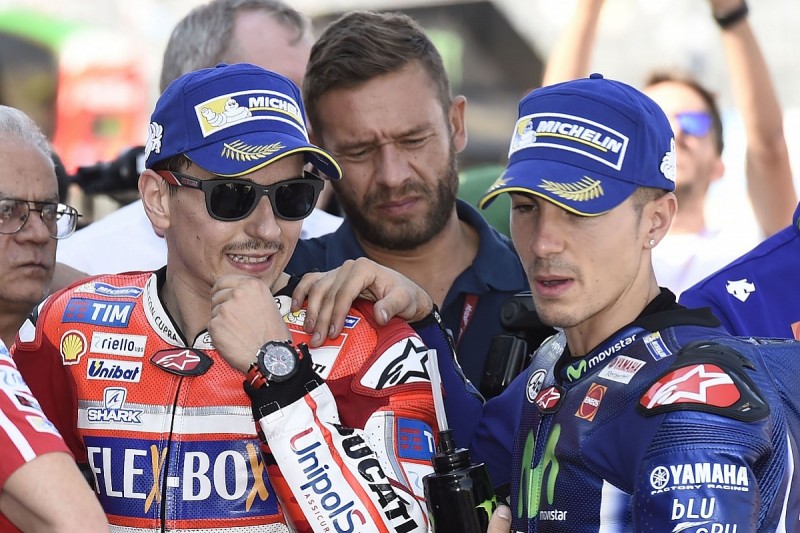 Maverick Vinales echoed factory Yamaha team-mate Rossi's sentiments, saying that a return for Lorenzo - who he replaced at Yamaha in 2017 - could help the manufacturer recover from its ongoing slump.

"Why not? [He is a] strong rider, [and offers a chance] to increase the level and be stronger," said Vinales.

"It's interesting for Yamaha because now, after Ducati, he has some experience on other bikes and maybe he can help.

"Lorenzo is a great rider. He's really good, he has a lot of potential, on the correct bike he can win races.

"It's interesting for us also that [if] he tries the new bike, he can give more commentary as he [spent] eight years at Yamaha before."

How MotoGP lost its mind over the new Marquez