Rossi hits out at Zarco's 'Moto2' tactics after Austin incident

Tech3 Yamaha's double Moto2 champion Zarco continued his fast start in MotoGP by pressuring works rider Rossi for fourth place early on before making a move down the inside at Turn 3.

That forced Rossi wide and over the asphalt run-off area, and as he rejoined after Turn 4 closer to Marc Marquez ahead than Zarco behind, stewards handed the Italian a 0.3-second time penalty for gaining an advantage.

While that proved immaterial for Rossi's race, as he crossed the line in second 2.343s ahead of Dani Pedrosa, he felt Zarco was "the problem" rather than the penalty.

"For me it's not right, because I had two choices," Rossi said.

"I do it like this [using the run-off] or we touch and we crash.

"I read that it's 'gaining advantage', and for sure I gained some advantage and 0.3s is OK [as a penalty].

"But this is not Moto2. If you want to overtake, you have to overtake in another way."

The seven-time MotoGP champion suggested Zarco is currently making his passing attempts too late into a corner, and added "he has to stay more quiet".

Rossi, who takes the championship lead with his third podium of 2017 after team-mate Maverick Vinales' crash, said he agreed with Yamaha's decision not to inform him of the penalty on his pitboard during the race.

"My team waited and when I overtook Dani I was able to make a good gap in first two sectors, [gaining] one second, so they said it's not important," he said.

"If you put on the board 'penalty', maybe you put 'penalty, 0.3' but when I pass I could see 'penalty 3' and [think] maybe it's three seconds or three tenths and I risk at the maximum on the last lap to take more advantage and I maybe make some mistakes.

"They made the right decision, because I don't need to know." 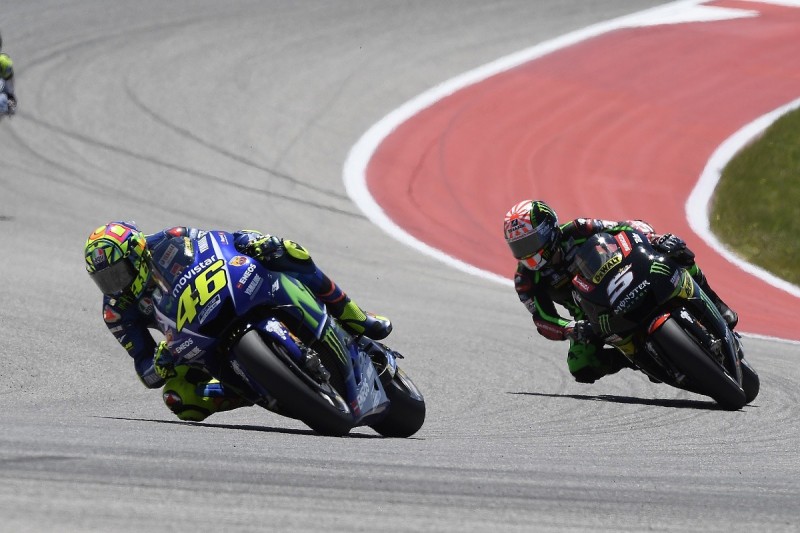 ZARCO: I HAD TO TRY THERE

Zarco finished fifth, matching his result from Argentina a fortnight ago, and felt he had to try to pass Rossi to capitalise on an error.

"He was not so fast in corner two, because of the mistake in corner one," Zarco said.

"You need to anticipate it a lot and I said 'this is the opportunity to go for it in corner three', but he was able also to come quite fast.

"I took the decision to do it, I did and it was on the limit but it's OK."

Zarco said his only regret was losing touch with early leaders Pedrosa and Marc Marquez as a result.

"The worst thing was we lost contact with the Honda guys," he said.

"[Rossi] was able then to catch them in the end, I lost contact and could not follow him anymore."