Quartararo was forced into a recovery ride when he ran off track at Turn 2 on the opening lap of Sunday's race, before crashing out at Turn 6 on the ninth tour while running outside of the points.

This compounded another difficult weekend at the Ricardo Tormo Circuit for Quartararo, in which he admits right now "we are not fast".

"The feeling since the Le Mans GP is not there, we are trying to work in the best way possible, we are not fast and we need to find a solution," Quartararo said on Sunday.

"I hope to find it in Portimao because we are missing speed and this is not normal.

"When we arrive to a track like Jerez, Barcelona it was great straight away, but Misano and all the other tracks we are struggling way too much and I think we need to find a solution to be competitive like last year in every track."

Quartararo labelled his Friday at the Valencia GP one of the worst days of his season, after turning the M1 upside down and making no improvement with the set-up.

In the eight laps he completed of Sunday's race, he admitted his problems persisted and believes he now has to adapt himself to the bike's issues instead of making major set-up changes. 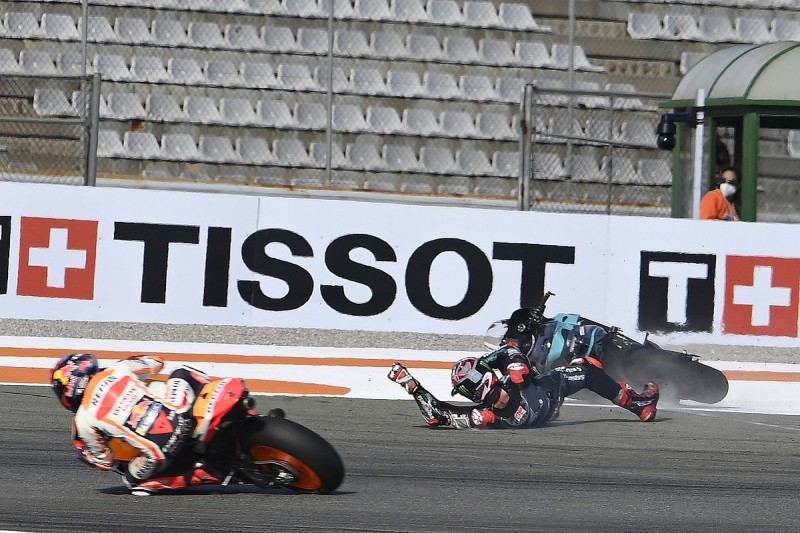 "We have been here for two weeks and in two weeks we have not made any improvement on the bike," he added.

"We try many things, but I think we need to go with our base and adapt. I need to adapt myself to the bike because we saw doing all these changes nothing was working.

"So, I think the best is to go with our base. If we see that everything is going well in the position of the bike, of course we don't change nothing.

"If we see something strange, of course we change. But I think we just need to adapt ourselves to the bike and see what we can do."

Having led the championship for much of the season, Quartararo's disastrous Sunday has dropped him to fifth in the standings and ended his slim championship hopes.

Quartararo praised new world champion Joan Mir and the consistency he showed in 2020, which was something the Frenchman was missing.

"For me, he did an amazing season," he said of Mir.

"He deserves a lot this title because that's what we were missing this year - consistency, to fight for much more podiums.

"Apart from the three wins, we made zero podiums. You can't win a championship this way, and I'm struggling a lot to know why we were like this.

"Joan deserved the championship and big congratulations to him."