Zarco moved into first place at the Qatar Grand Prix venue with exactly two hours left on the clock, holding a lead of half a tenth over LCR Honda man Cal Crutchlow with his 1m54.429s effort at that point.

Frenchman Zarco then improved on two more occasions half an hour later, stretching his gap to over four tenths with a time of 1m54.029s, just 0.102s slower than Jorge Lorenzo's lap record from 2008.

While Crutchlow did not lower his own benchmark for the rest of the session, he held second until the final hour when first Andrea Dovizioso and then Rossi demoted him.

Rossi, who recovered from a crash at the Turn 14 right-hander towards the end of the lap three hours into the session, was 0.247s slower than Yamaha stablemate Zarco.

Works Ducati rider Dovizioso took third, just half a tenth slower than Rossi, with Crutchlow ending up the fastest Honda rider in fourth. 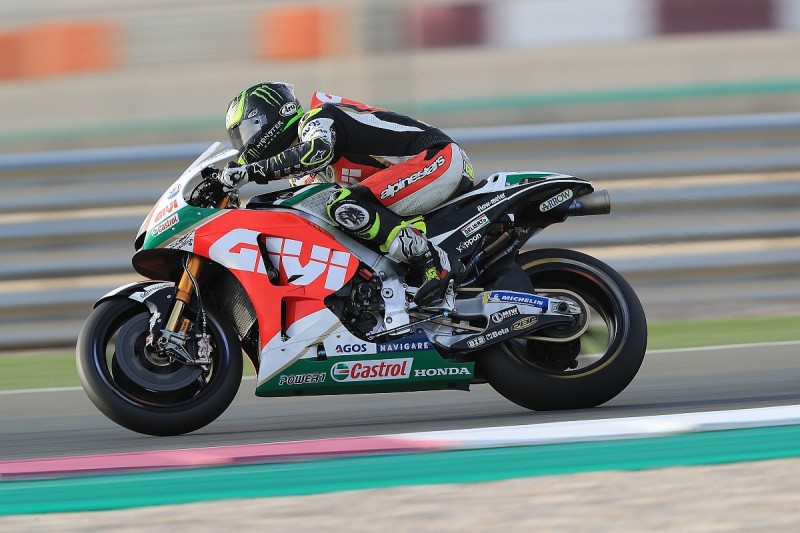 Rossi's team-mate Maverick Vinales was as low as 20th at the start of the final hour but gained 15 positions to end up fifth.

Reigning champion Marc Marquez was sixth on the best of the works Hondas, followed by Alex Rins, Suzuki's only rider as Friday pacesetter Andrea Iannone sat out the session with a stomach bug.

Rins beat Ducati trio Danilo Petrucci, who led for an hour in the middle of the session, Jorge Lorenzo and Jack Miller by less than a tenth.

Dani Pedrosa was 11th on the second factory Honda ahead of Marc VDS Honda's Franco Morbidelli, who was the fastest rookie in 12th.

Hafizh Syahrin was just a tenth and three positions behind the Moto2 champion, the Malaysian completing his only second MotoGP test 1.2s adrift his Tech3 team-mate Zarco.

Pol Espargaro, who did not ride on Friday as he is still recovering from injuries sustained at the Sepang test in January, was back in action on Saturday but could only manage 19th.

After seven hours of dry running, riders will be required to take part in a half-hour wet session later on Saturday aimed at assessing whether it would be possible to host a wet race in Qatar under the floodlights.