Bradley Smith labelled Finland's KymiRing "very different to anything we've seen before", as all six MotoGP manufacturers' test riders sampled the new track for the first time on Monday

In preparation for Finland's return to the MotoGP calendar for the first time since 1982 next season, the factory teams' official test riders have been given two days to evaluate the still under-construction circuit.

Despite the wet weather, Smith (Aprilia), Yamaha's Jonas Folger, Sylvain Guintoli on the Suzuki, KTM's Mika Kallio, Stefan Bradl (Honda) and Ducati's Michele Pirro all took to the track during the seven-hour initial session on Monday.

Speaking in a press conference at the end of the day, Smith said the KymiRing is a departure from the rest of the venues on the current calendar and noted the "technical challenge" of the layout.

"This is a different track, very different to anything we've seen before," said Smith.

"Quite tight and twisty and a little bit slow in places, but we also have places like Silverstone where it's flat-out everywhere.

"Sometimes it's good to have a complete different end of the spectrum.

"Also we have three different categories [MotoGP, Moto2, Moto3]. It's not just for MotoGP and I think those smaller bikes will really fit this racetrack.

"There are a lot of off-camber corners here which makes it difficult for the riders, it's a technical challenge."

Home rider Kallio was the first to take to the circuit on Monday, an experience he labelled as "cool", but feels the circuit is too slow in some places and not "ideal" for a MotoGP bike.

"If I need to say something now, I believe there are some corners that we need to change," said Kallio.

"Basically we need to have some kind of gap between the corners. Now the bike is turning to the left or right all the time, and that's not ideal for MotoGP.

"So we need a little bit longer straights between the corners. That's my opinion."

Smith also called for some changes to be made to the camber of some corners for safety reasons, and thinks drainage needs to be improved. 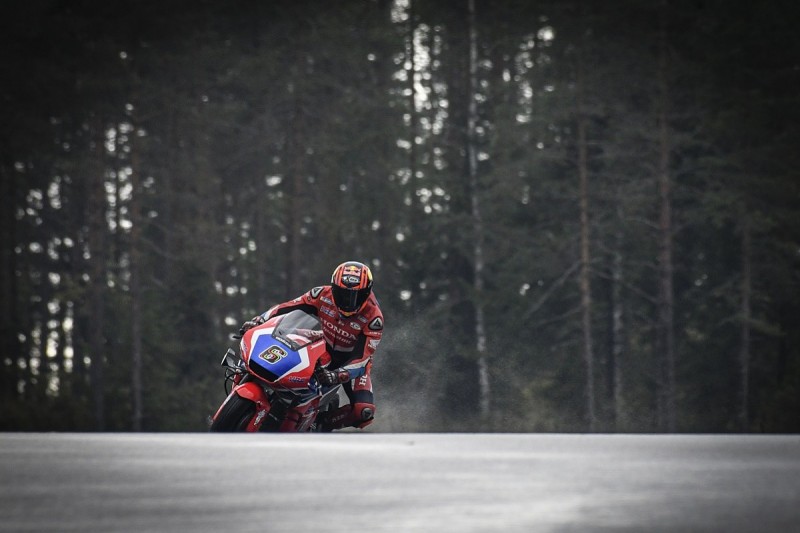 Honda test rider Bradl was caught out by the conditions and became the first rider to crash at the KymiRing, when he touched a white line while braking for the penultimate corner early in the session.

The Finnish GP previously ran between 1962 and 1982 - though the premier class's last visit was '81 - at Tampere (1962/63) and the Imatra road circuit, which was revived in recent years and now hosts a round of the International Road Racing Championship.

Earlier on Monday, a press conference for Dorna, FIM and circuit officials was held, with Dorna sporting director Carlos Ezpeleta confirming next year's Finnish GP will have a summer date as "there is no other option" - but he could not reveal when specifically it will fall.

At the start of the month, Autosport learned Finland will not be a replacement for a current round, with the calendar swelling to 20 events as a result.

The private test at the KymiRing will conclude on Tuesday.