The 2020 season in on indefinite hiatus until at least the end of July, after the coronavirus pandemic forced the cancellation and postponement of the opening 11 rounds.

This has presented a major problem for the make-up of the 2021 grid, as almost all premier class seats were up for grabs at the start of this year.

Yamaha has locked down Maverick Vinales and Fabio Quartararo, while Honda signed Marquez on a new four-year deal - reportedly worth up to €100million - and Suzuki has re-signed Alex Rins.

Avintia's Tito Rabat already had a deal in place to remain with the Ducati satellite operation for next year.

But the lack of racing, and potential for no racing at all, has posed issues for the likes of Valentino Rossi, Alex Marquez and Ducati, not to mention potential Moto2 graduates.

When asked about the situation, Marc Marquez told Spanish outlet Marca that MotoGP should consider following on from its engine and aerodynamic development freeze through to the end of 2021 and do the same with rider contracts.

"The situation is difficult," Marquez began. "I have already renewed for four years with Honda. 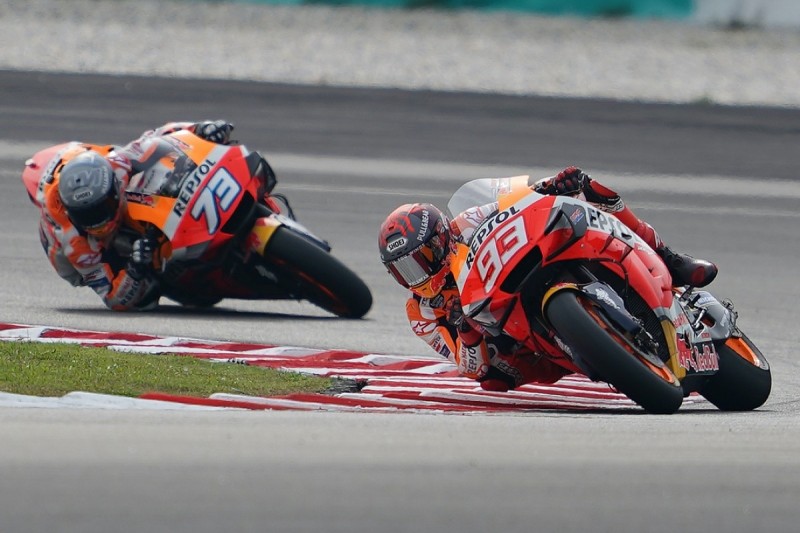 "It was a risky bet on both sides, but I think it was a good one.

"There are, however, many who have not yet signed a contract, who must prove they deserve a place in MotoGP, in Moto2, in Moto3, and among those is my brother.

"I think teams need to have tact, or a slightly more open mind.

"The development of motorcycles has been frozen from 2020 to 2021, and I think it is a good thing because the budgets of the team will also be affected by this pandemic.

"Why not do something similar with rider contracts?

"They could freeze them, as if this year hadn't happened. But these are things beyond my control."

In recent weeks, Petronas SRT boss Razlan Razali said he would push to retain works Yamaha team-bound Quartararo should this year be cancelled outright despite the Frenchman already signing his 2021 deal.

Responding to his brother's comments, Alex Marquez says extending his Honda stay into 2021 without proving himself on track does not appeal to him.

"I want to ride and earn my renewal with results," the reigning Moto2 champion said.

"As a rider, I would not like to sign a contract without racing. It could happen, but I hope not."