Bagnaia held off Honda’s Marc Marquez in a thrilling battle for victory in Sunday’s 23-lap race at Aragon, marking the Italian’s first win in the premier class and making him the eighth different rider in 2021 to take to the top step of the podium.

The Italian has come close on several occasions to a maiden win, most notably at the Emilia Romagna GP in 2020 when he crashed out having led for over half the race. Bagnaia, who stepped up to the factory Ducati team from Pramac this year, also crashed at Mugello earlier this year while leading.

The victory came in the 42nd start of a career that began in 2019, and yielded four runner-up finishes before his breakthrough in Aragon.

When asked for initial thoughts upon taking the chequered flag, Bagnaia said: “First thing that I think was ‘ah, it’s over’.

“It was a long race, all the race on the [pit] board with [it reading] ‘plus zero’ [to Marquez], and [it] was a long race for the conditions. Today was very hot and the tyres were dropping a bit more.

“The pace was strong, and I think that all the times that I was competitive and fast and I lost the opportunity every time to win, today that gave to me an extra sweetness to win this race.

“Every rider needs time. I struggled a lot in the first year, apart from Phillip Island when I finished fourth – but fourth with 12, 15 seconds from the first one. And the second year started well, but I was not so fast sometimes.

“And this year I was fast, but sometimes I was without possibility to win. In Portimao with the yellow flag in qualifying, I missed the opportunity to fight. In Mugello, I crashed because of my mistake.

“So every time I was missing something. And this weekend we worked perfectly I think. 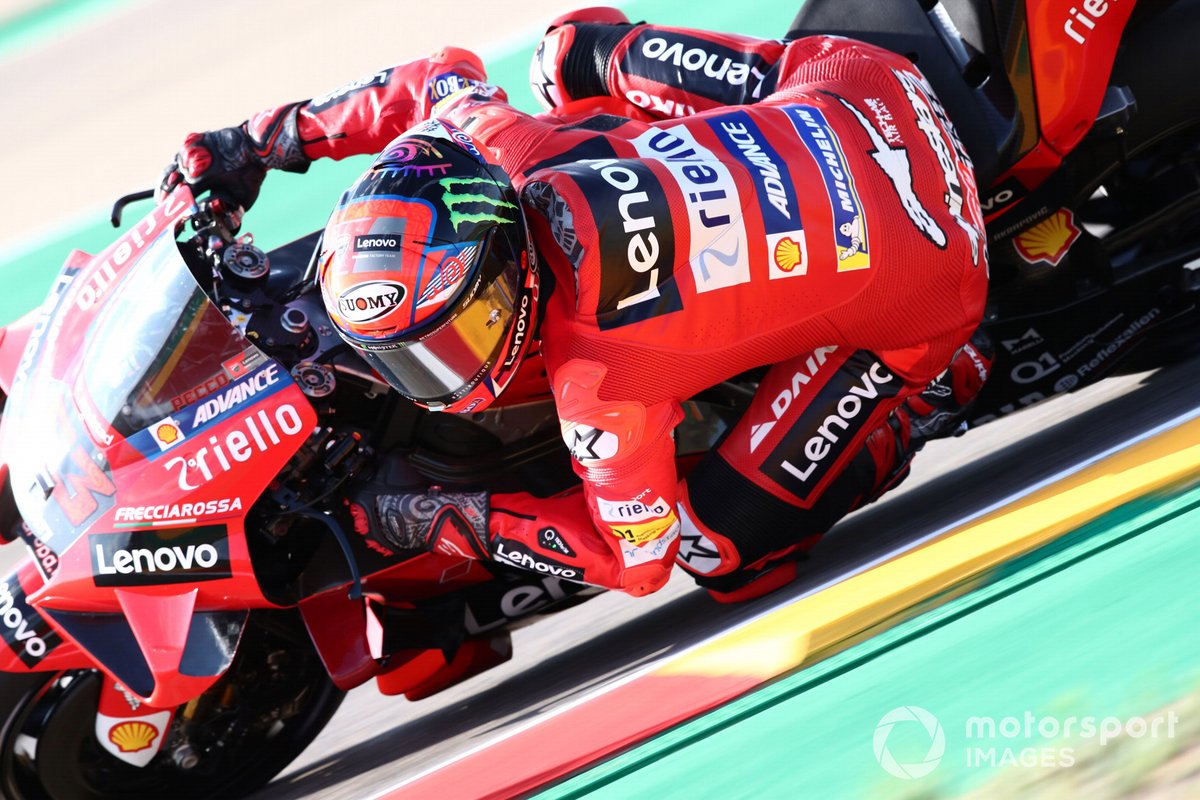 “It will not be easy to make a weekend like this, because not touching anything on the bike is incredible.

“For sure, after these two years in MotoGP and winning now in the factory team like this is a great emotion for me.”

Aragon proved a disastrous track for Bagnaia in 2020, with the colder conditions for the October double-header meaning he qualified towards the back of the grid for both the Aragon and Teruel GPs, failing to finish either of them.

As a result, Bagnaia admits his pace at the track this weekend came as a surprise.

“I saw [Marquez] was overtaking me in points where I was strong in the exit and in the last part of the race with the rear tyre that was down in grip, to cross the overtake was a bit more easy,” he said.

“In the last attempt in Turn 12, I was already braking so hard and when I see he was trying to overtake me I was sure he was [going to go] a bit wide. I just tried to do the best possible lines in the last corners.

“I’m very happy, I was not expecting to be so strong in this track because last year I struggled a lot.

“From FP1 I didn’t touch the bike, everything was perfect, and to win today is incredible, I’m so happy.”