The seven-time premier class champion spent last Thursday night in hospital after injuring his chest and abdomen in a motocross crash while training but was passed fit to ride at Mugello.

Rossi, who finished 11th and 12th in Friday's two sessions, expected breathing to be an issue on his return to MotoGP action, but was surprised to be held back by arm pain instead on what he termed a "difficult day".

"I have to struggle a little bit, because this track, Mugello, with a MotoGP bike, with this temperature is already very difficult physically even if you are at 100%," he said.

"So especially this morning I suffered a lot, especially in acceleration, because I have pain in my right arm to stay on the bike.

"When I opened the throttle and I had to hold onto the handlebar with all my strength, I had a lot, a lot of pain.

"I didn't expect this, maybe I expected something else. It was a surprise."

The Italian didn't use painkillers for the morning session but decided to take "very light" medication for second practice.

"This afternoon, we worked a lot on the arm, we took something, and in the afternoon, these things were better," he added.

"But it remained very difficult, especially to recover - to do a long run, after five or six laps it was difficult.

"But it's just Friday, maybe it will improve." 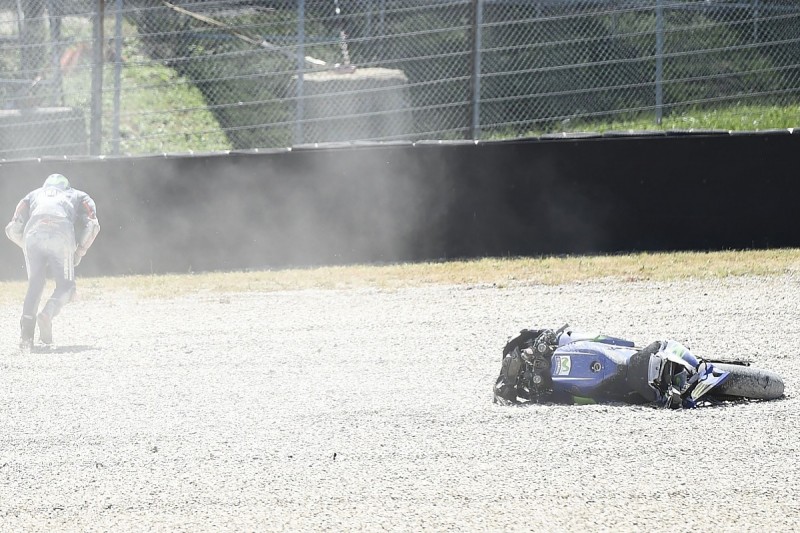 Rossi's Yamaha team-mate Maverick Vinales crashed heavily in the afternoon session, losing his bike on the kerb at Arrabbiata 2.

The championship leader, who was third-quickest in the opening practice while using a soft front, was trying the medium compound when he crashed.

"For that crash, I am a bit damaged but OK," Vinales said.

"Luckily I walk away, very luckily because corner's really fast.

"I didn't have a good feeling on the right side [of the medium front]. I think the tyre was too hard for our bike.

"So I think it was a bit the tyre and a bit me searching for the limit of the bike. There was probably less grip and that made me lose it."

Vinales finished the day fifth in the combined standings with his morning time, nine spots ahead of Rossi.