Maverick Vinales led a MotoGP session for the first time in nine months by topping third practice at Le Mans, while Marc Marquez recovered from a crash to finish second

It was not until around halfway through the 45-minute Saturday morning session that the first change from Friday's provisional top 10 order was made, as Cal Crutchlow surged to the head of the FP3 times.

With just over 10 minutes left on the clock, home hero Johann Zarco grabbed top spot with a time just 0.004 seconds faster, which remained the fastest effort until the final five minutes.

Marquez suffered a low-side crash at the Dunlop chicane at the start of his final run, damaging his new aerodynamic fairing in the process - his works Honda shedding its left-hand side winglet.

But that did not stop the reigning champion from moving to the top with three minutes remaining with a lap of 1m32.011s, moments after Ducati's Jorge Lorenzo had beaten Zarco's time.

Zarco then became the first rider to beat Andrea Dovizioso's record-breaking Friday benchmark with a 1m31.866s with a minute to go, but that was quickly surpassed by the works Yamaha of Valentino Rossi, who moved ahead on a 1m31.810s.

As the chequered flag fell, Marquez set a new benchmark of 1m31.774s, only to be beaten by Vinales - who had been one thousandth short of team-mate Rossi's time on his penultimate lap - who found a further two tenths to end up on a 1m31.619s and establish a new record.

It marks the first time Vinales has led a session during a race weekend since he qualified on pole at Aragon last September.

Marquez was demoted to second ahead of Rossi, with Zarco dropping down to fourth, 0.247s adrift, when he was unable to improve on his final lap. 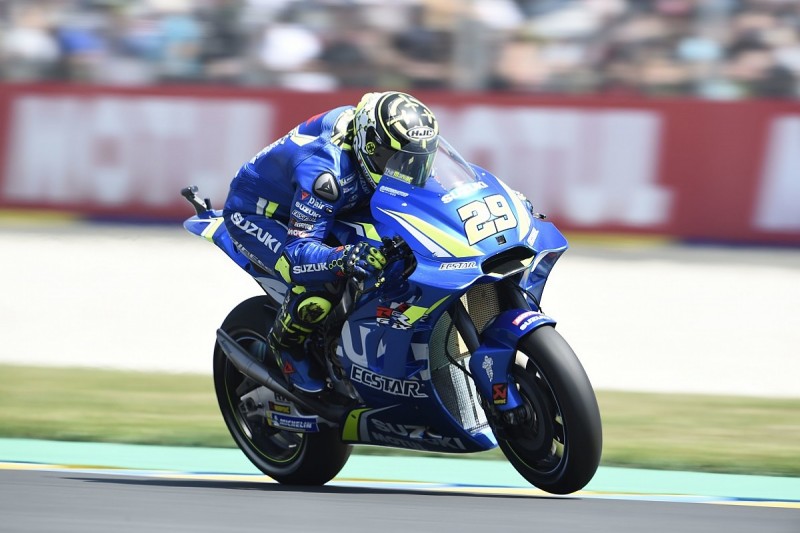 Grabbing the final automatic Q2 spot was lead Suzuki man Andrea Iannone, who shaded Crutchlow by 0.083s for 10th in the combined times.

Joining Crutchlow in Q1 will be the second Pramac bike of Danilo Petrucci, Suzuki's Alex Rins and Honda's Dani Pedrosa, who was one of four riders who could not improve on Saturday morning.

Pol Espargaro was another one of the quartet after crashing early in the session, but still ended up as KTM's best finisher in 14th overall, two places ahead of Pedrosa - who also crashed at Turn 12.