With the threat of rain looming over the Assen circuit when the pole shootout got underway, the lap record was immediately beaten by Pramac’s Jorge Martin before Bagnaia streaked clear in the closing stages to claim back-to-back pole positions.

Martin’s early benchmark of 1m31.708s on his first lap put him underneath Maverick Vinales’ lap record from last year, with Quartararo 0.010s adrift in second.

Quartararo’s second lap was scuppered when he ran off into the gravel at Turn 1, while nobody else put Martin’s effort under threat.

With just under five minutes remaining, however, Bagnaia began to light up the timing screens on the first lap of his second run on a fresh soft rear tyre. The factory Ducati rider hooked the tour together to produce a 1m31.504s to go fastest of all.

Quartararo made an improvement to a 1m31.620s on his penultimate lap to move back into second having been demoted to third by Bagnaia’s lap. But he had to abort his final lap when he almost crashed at the Turn 5 hairpin, resigning him to second on the grid, missing out on pole by 0.116s to Bagnaia.

Martin suffered a crash at Turn 5 in the latter stages of Q2 but held onto a place on the front row in third, with VR46 Ducati rookie Marco Bezzecchi also dipping underneath the lap record to go fourth.

Aprilia’s Aleix Espargaro was unable to improve on fifth late on when Ducati’s Jack Miller crashed at Turn 5, with the latter slotting into sixth despite his spill.

However, Miller is likely facing a penalty after Maverick Vinales almost ran into him on the back straight between Turn 5 and Turn 6 on the Aprilia rider’s last lap as Miller toured on the racing line. 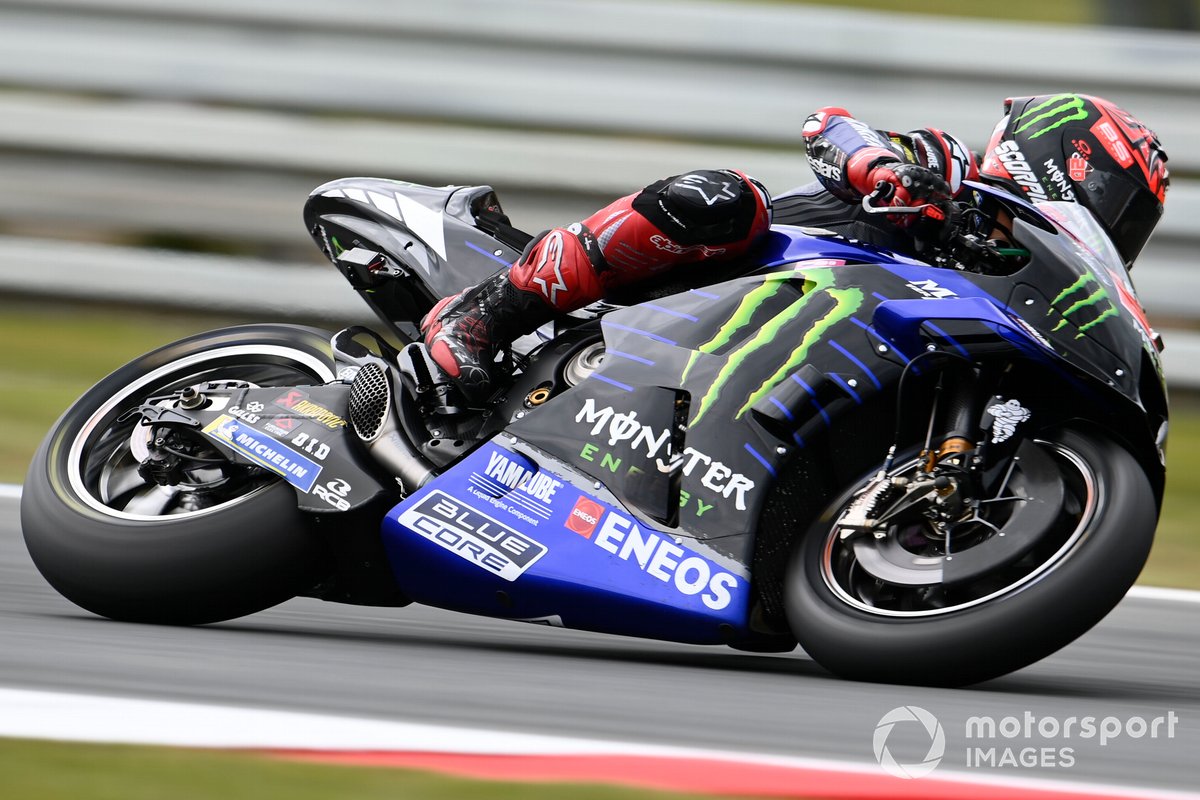 Johann Zarco heads row three on the second of the Pramac Ducatis in seventh ahead of Q1 graduate Miguel Oliveira on the factory team KTM.

Alex Rins was ninth on his Suzuki ahead of Q1 pacesetter Brad Binder on the sister factory team KTM, with Vinales 11th after his scare with Miller and LCR’s Takaaki Nakagami the only Honda inside the top 12 in 12th.

VR46’s Luca Marini couldn’t continue his Q2 run stretching back to Mugello as he missed out on progressing to the pole shootout session by 0.237s on his Ducati. He heads Joan Mir, after the Suzuki rider’s Q1 was hindered by a tipoff at the Turn 5 hairpin in the latter stages of the session.

Fabio Di Giannantonio shadowed the 2020 world champion in 15th as his Gresini Ducati team-mate Enea Bastianini had to complete Q1 on his spare bike after his first GP21 broke down as he exited pitlane for his first run.

Andrea Dovizioso was the best of the three Yamahas who failed to join Quartararo in Q2, the RNF Racing rider 17th from the sole Repsol Honda of Stefan Bradl after team-mate Pol Espargaro pulled out of the Dutch GP weekend on Saturday morning due to injury.