Jack Miller led a Ducati 1-2 in a crash-strewn third practice for the MotoGP Aragon Grand Prix, as a tumble for Marc Marquez left him outside of the Q2 places.

Marquez made his long-awaited grand prix weekend return on Friday after a 110-day absence while he recovered from a fourth major operation on his right arm.

Ending Friday eighth overall, Marquez admitted he was likely to “suffer” come the race with his physical condition and was yet to find his true limit as he hadn’t crashed.

Marquez made a box office front-end save going through the penultimate corner, reminiscent of his old self, just under 10 minutes into FP3.

But he would overstep the mark midway through the 45-minute session when he crashed at Turn 7. Able to re-join the session, Marquez could only manage 12th at the chequered flag.

The cooler conditions of Saturday morning at Aragon meant there were only a few changes on the combined timesheets and none significant.

VR46 Ducati rider Marco Bezzecchi led the individual FP3 timesheet after 10 minutes with a 1m47.955s, which was only good enough for 14th overall.

By this point, only Bezzecchi, Gresini’s Fabio Di Giannantonio, RNF Racing’s Darryn Binder, the injured Suzuki rider Joan Mir and Honda’s Pol Espargaro had found lap time gains from their Friday bests – though all remained outside of the Q2 places in the top 10.

Mir – who was unsure after Friday his Aragon weekend would continue much longer as he struggled with the ankle he broke in Austria – made the first big improvement on the combined order with around 23 minutes to go.

The Suzuki rider moved up to ninth with a 1m47.763s, which put him fastest on the individual time sheet.

It wouldn’t be until the final 12 minutes when Jorge Martin’s time from Friday was finally bested by factory Ducati rider Jack Miller with a 1m46.992s.

Miller’s lap would be put under pressure by his team-mate Francesco Bagnaia at the death, but the Italian missed out in second by just 0.030 seconds.

A bevy of yellow flags for various crashes wreaked havoc for those setting their final flying laps to try and bag a place in Q2 for qualifying later today.

Several riders did manage to sneak through, however, with Bezzecchi and Gresini’s Enea Bastianini making late jumps to fourth and fifth.

Martin was fifth on the combined order ahead of the rapid KTM duo of Brad Binder – who crashed late on at Turn 2 - and Miguel Oliveira, who outpaced championship leader Fabio Quartararo on the factory Yamaha in eighth. 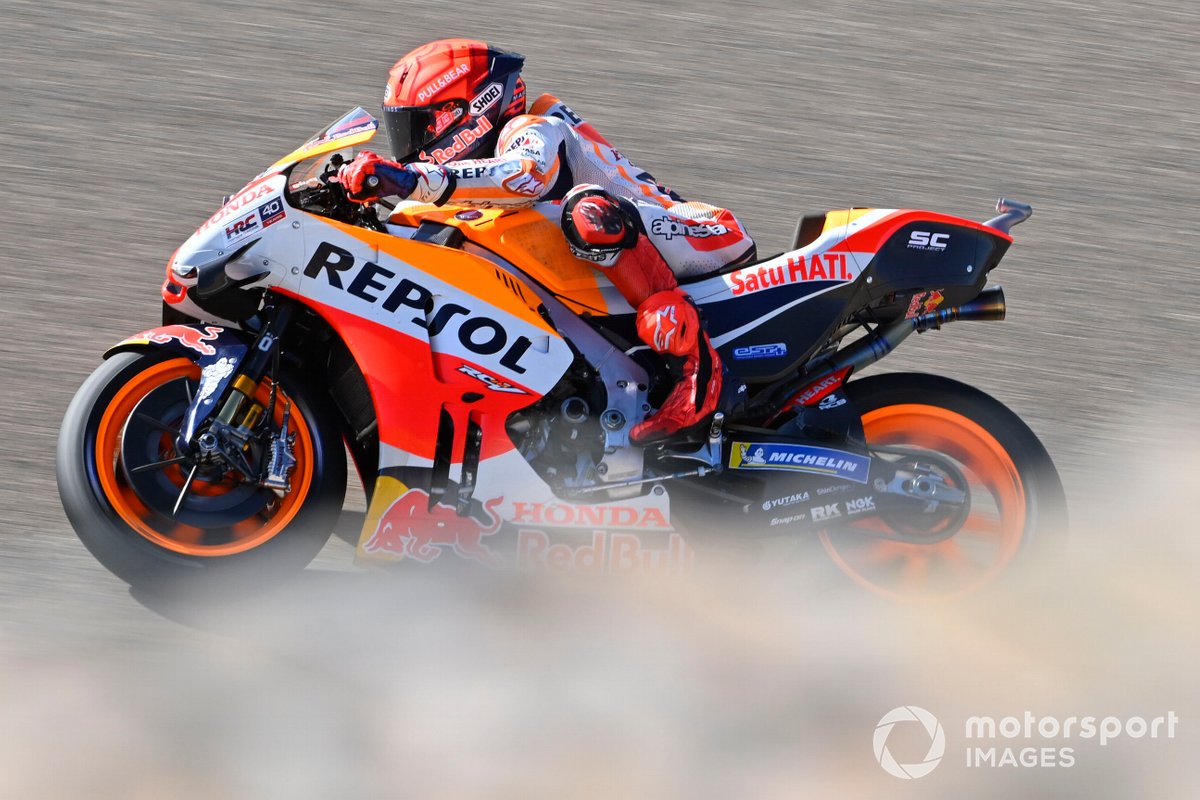 The final Q2 spots went to LCR Honda’s Takaaki Nakagami and Suzuki’s Alex Rins – who also had a late crash - but the late improvements for Bezzecchi and Bastianini came at the expense of Aprilia’s Aleix Espargaro.

The third-placed rider in the championship was expected to be strong at Aragon having taken some of Aprilia’s previous best results at the Spanish circuit in recent years.

But he will face Q1 having missed out on the top 10 by 0.049s ahead of Marquez, whose final lap was hampered by a mistake into Turn 1.

Neither Aprilia rider made it into Q2, with Maverick Vinales 17th having been unable to improve on his Friday best.

Pramac’s Johann Zarco will also join a volatile Q1 session later today after he was 15th at the end of FP3, with Mir dropping to 19th late on.

Crashes for RNF duo Darryn Binder and Cal Crutchlow left both in 21st and 23rd, with Honda’s Pol Espargaro sandwiched between.

Qualifying for the 2022 MotoGP Aragon GP will get underway at 2:10pm CEST.