Ducati rider Lorenzo dominated the early stages of the Misano race, quickly pulling away from the field after making a lightning getaway from fifth on the grid.

The Spaniard's advantage over Danilo Petrucci in second was out to more than three seconds when he lost the rear of his bike and crashed out on lap 7 of 28 at Turn 6.

As he explained the incident, Lorenzo admitted he had devoted too much mental energy to working out the best mapping to use and not enough to riding.

A quicker-than-normal change of direction was then enough to unsettle his bike and end his race.

"The system on the Ducati is more complex [than the Yamaha]," he said.

"It's not natural [yet] because I don't usually change it too much during the weekend.

"I still haven't completely adapted and I think too much about all the possibilities.

"This means I lose concentration on riding, it doesn't mean I just couldn't ride.

"I made a quicker change of direction and [was] not using the rear brake - it was enough [to cause me to crash].

"I didn't expect that this change of direction would mean losing the rear so aggressively, but it happened and it was a big pity.

"But when you are racing in the rain, this can happen.

"[It's] a great pity because today we had the first great chance to win with Ducati, [and] we lost it.

"[But] it's a matter of time [until] another podium arrives and maybe a victory."

Despite not being renowned for his wet-weather pace, Lorenzo felt he could be competitive in the tricky conditions judging by his pace in Sunday morning's warm-up session. 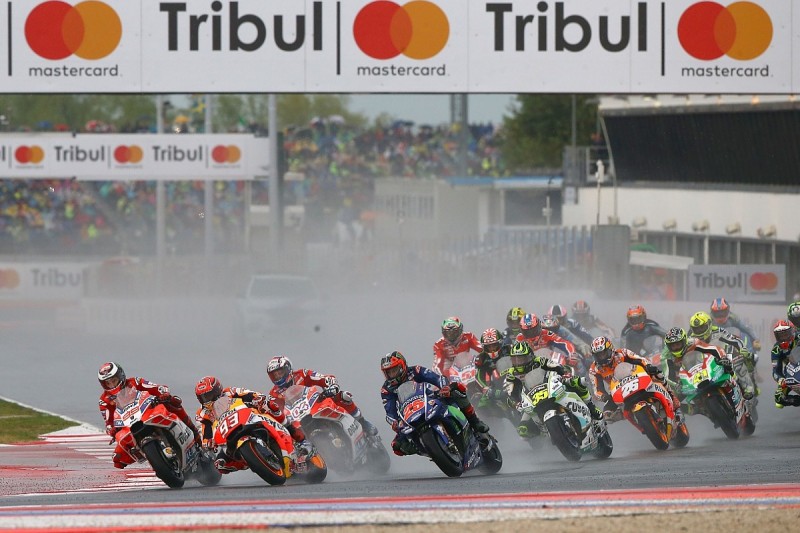 "I knew I was very strong in the rain because in the warm-up I felt good [and] I wasn't pushing," the triple premier class champion said.

"With some modifications in the race I felt even better [and]that made me feel a little bit more confident.

"Riding quite calmly I opened the gap, one second each lap.

"Normally when I lead a race, I am very good at maintaining this distance.

"But in the wet the track was a little bit more tricky than normal, and I'm still understanding everything on the Ducati.

"I believe this lack of concentration for the reason of [the] electronics [change] caused the crash.

"Today, to survive, you couldn't have these things out of control, and I didn't."