Marc Marquez has explained what happened in his two “unlucky” collisions with Fabio Quartararo and Takaaki Nakagami in the MotoGP Aragon Grand Prix.

The Honda rider was making his MotoGP comeback this weekend at Aragon having been absent since May’s Italian GP following a fourth major operation on the right arm he badly broke in 2020.

Qualifying 13th, Marquez leapt up to sixth at the first corner in Sunday’s 23-lap race but suffered a moment on the gas going through Turn 3 which led to championship leader Quartararo crashing into the back of him.

A piece of Quartararo’s Yamaha ended up stuck inside the rear of Marquez’s Honda, which then forced him to slow as he engaged his ride height device exiting Turn 7 – leading to a collision with LCR Honda’s Nakagami.

Quartararo – who was involved in a scooter incident on his way back to the pits – escaped with some minor abrasions on his chest, while Nakagami suffered a laceration on two of his fingers.

“It’s true that I lost the rear a little bit and I closed the gas, but it wasn’t a very big moment,” Marquez, who retired in pitlane at the end of lap one, said.

“The problem was Fabio was super, super close because probably his intention was to overtake me on that change of direction like many times we did in the past.

“I had a small moment because Enea [Bastianini] and Aleix [Espargaro] were on the outside.

“I was on the good line and just I had a small moment, like many times we’ve had with a cold tyre.

“It was a race incident, very unlucky Fabio was super close as is normal and then I felt the contact.

“There started everything because I entered Turn 5, I felt something strange and then I say ‘what’s going on?’ And then I opened gas going into Turn 6, 7 I felt ok. 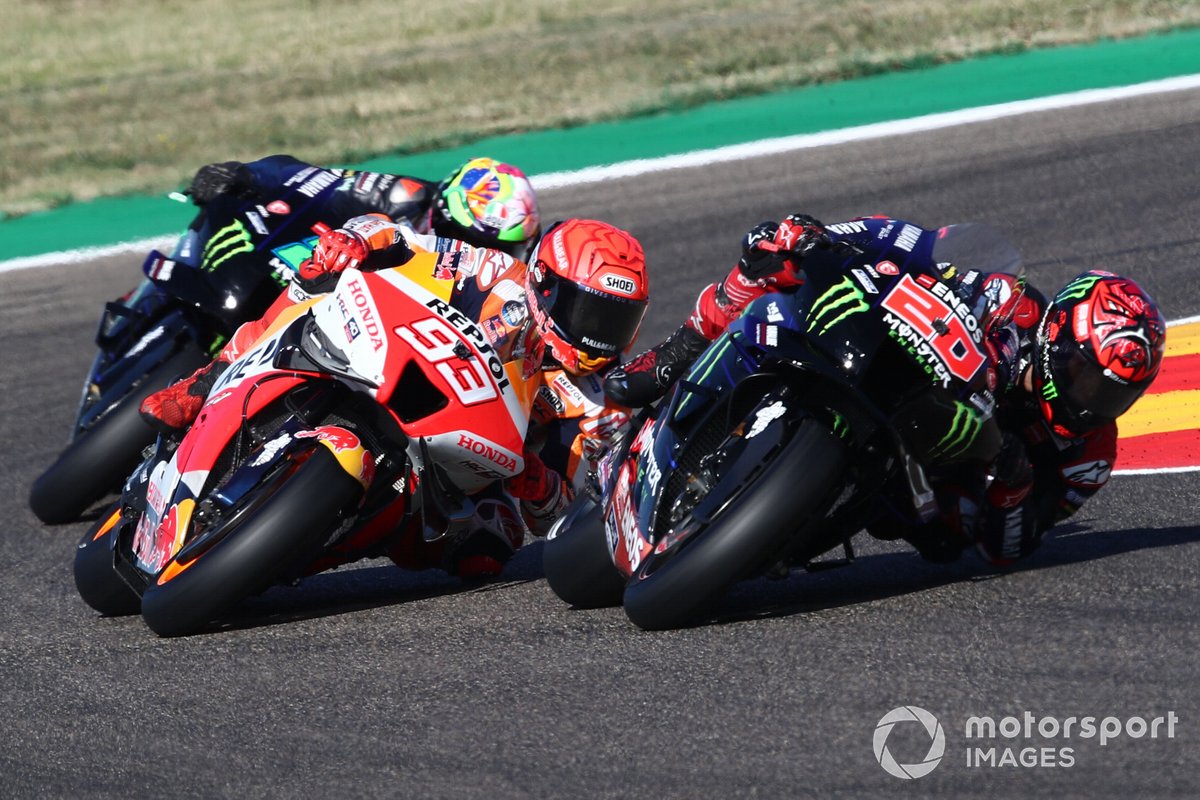 “On Turn 7 Nakagami overtook me and went wide and then when I was inside, already a little bit in front of him I engaged the holeshot.

“And as soon as I engaged the holeshot the rear wheel was locking. I checked the image very carefully and you can see a piece going out from the fairing.

“And when I feel the locking everything became crazy and the bike when I had that rear lock going on the left side I had no torque.

“After that incident I retired, but I retired not for the Taka incident. I retired for the Fabio incident. But both actions were very unlucky.”

Marquez admits he “didn’t expect” his rapid start from 13th on the grid, but says his intention for the race was to not have an aggressive first lap but simply get to the finish.

“The mentality was the same as I say during all the weekend: try to get kilometres, try to finish the race,” he added.

“And we didn’t get the target. I just did one lap. It’s true that the start was amazing.

“I mean, the start just the instinct was there and I had a good start and just I go outside. When I went out of the first corner I was sixth. It was something I didn’t expect.

“And from that point I said ‘ok, we will see’. But just after two corners everything went in the wrong way.”