Marc Marquez says the Dutch TT was the "best race" for his MotoGP championship hopes, as the Honda rider increased his points lead to 44 after finishing second

Despite qualifying off the front row for the first time this season amid a "difficult weekend" at Assen, Marquez battled with eventual winner Maverick Vinales and third-placed Fabio Quartararo, before backing off in the latter stages to consolidate second while main title rival Andrea Dovizioso was fourth.

Marquez admitted his struggles over the Assen weekend meant he "didn't care" about fighting for the win ahead of Sunday's race, and was solely focused on simply securing a podium and a solid points haul.

"[It was] the best race for the championship," Marquez said.

"I didn't care about the victory, I just concentrated on the podium, to fight for the podium.

"I was waiting behind Quartararo, and was waiting for Vinales because I knew he had better pace, and when he overtook I just used his slipstream to get away from Quartararo and the others.

"When I saw Quartararo was already four second [behind], my tyres were finished - especially the rear - and then I say 'okay, this is the position we want', and 20 points is good for the championship.

"We increased the advantage, and this is the best way to work for our target." 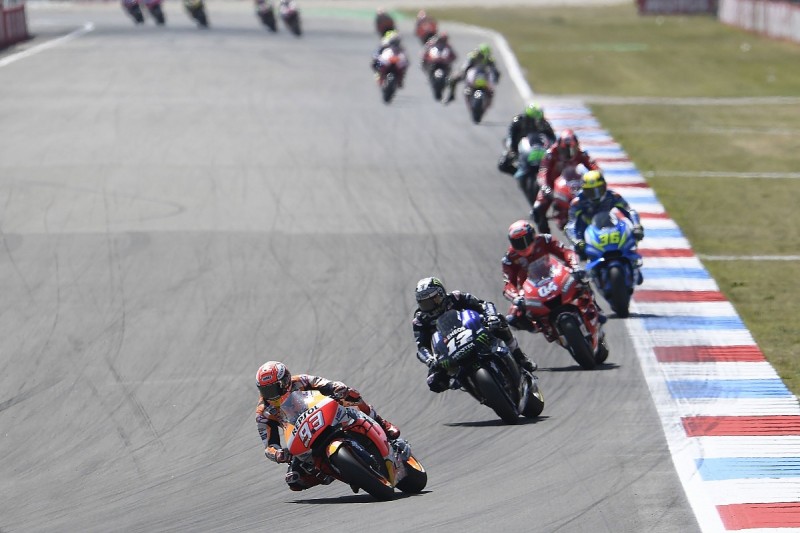 Marquez was one of only a few to opt for the soft rear tyre despite the hot track conditions, but said this was necessary in order to keep up with the Yamahas to pull away from the pack.

Lacking confidence on the harder compounds in races runs during practice, Marquez also noted running them would have dropped him closer to the battle for fourth with Dovizioso

"I choose the soft because my strategy was go away with both Yamahas," he said.

"But I never had in my mind to lead the race, because when you lead the race you use more the tyre, and you destroy the soft tyre even more.

"So my target was to be with Yamaha riders until lap 15; I knew I was ready to be with them.

"But with the hard, the risk was to stay with Dovizioso, [Franco] Morbidelli and be on that slower pace."

He added: "Of course, when I saw Maverick was extremely fast today, I was there following him just two laps, three laps, then I start to understand [there was] a lot of risk.

"I say already yesterday in the [qualifying] press conference Quartararo was 89 points behind us, and Maverick 100, and this is something I have to keep in my mind."